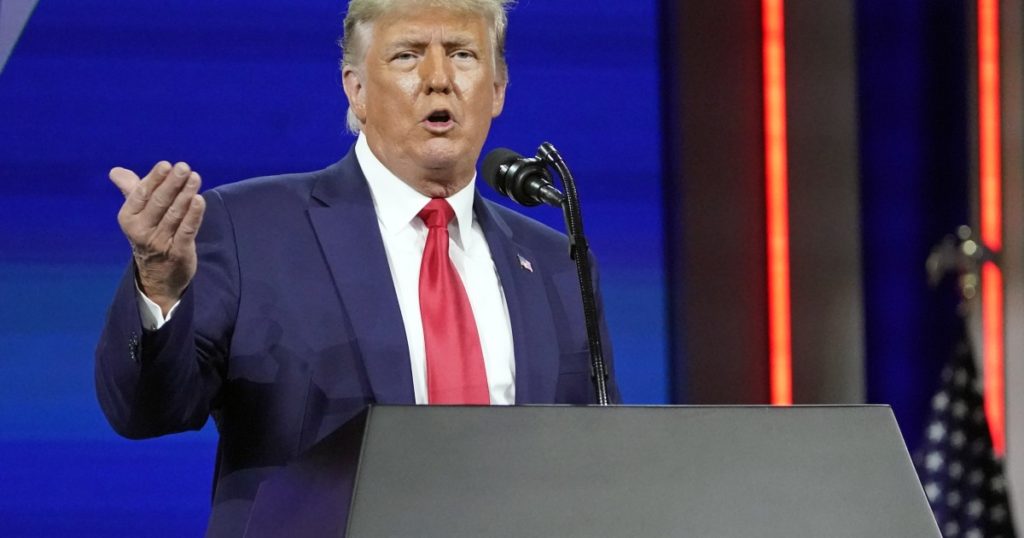 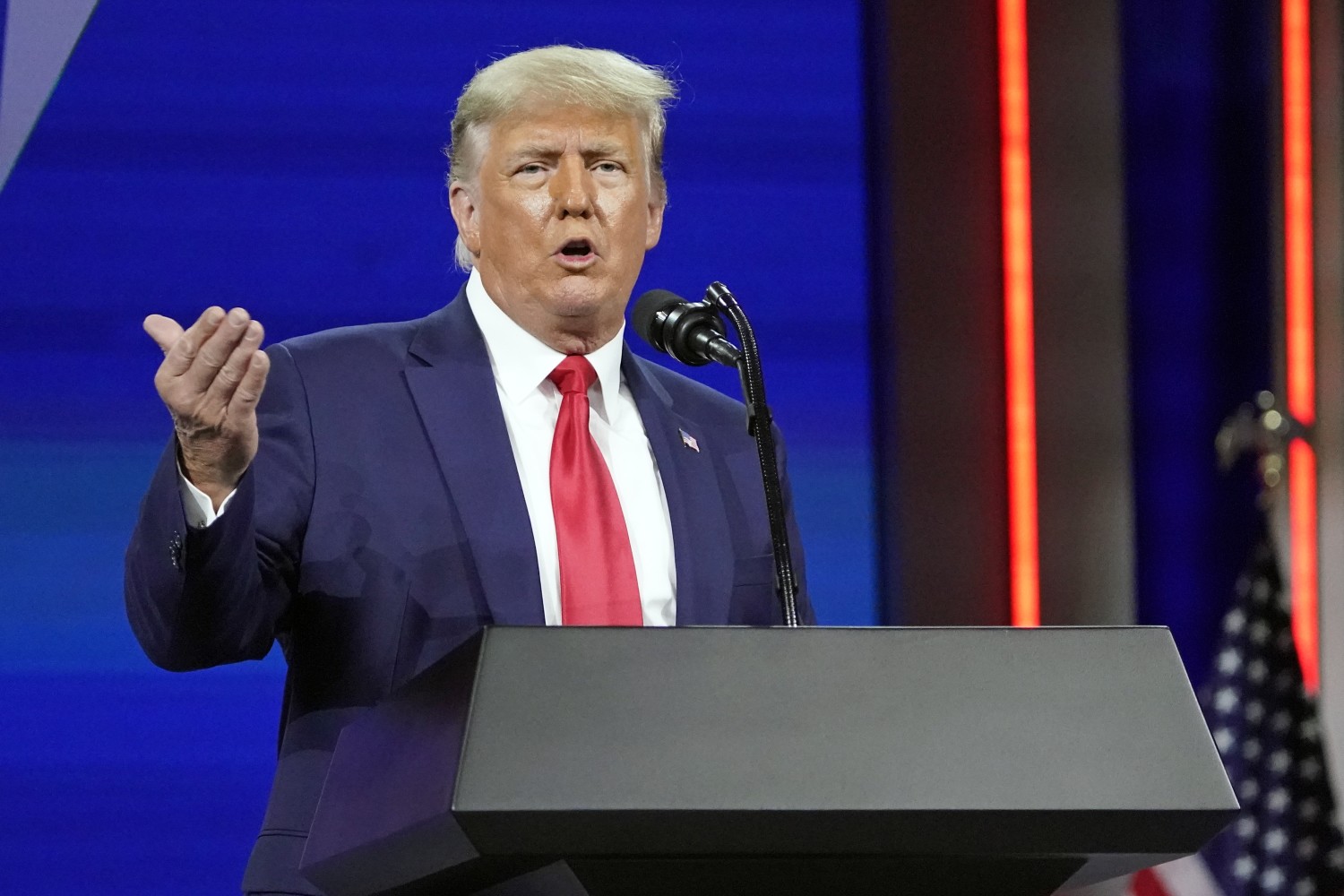 Making his first public appearance since leaving office not six weeks ago, former President Trump lashed out Sunday at his successor — and some fellow Republicans — during a fact-challenged and grievance-laden speech in which he teased another presidential run in four years.

In an address seemingly designed to assert continued control over his political party at the Conservative Political Action Conference in Orlando, Fla., Trump made clear he’s not over his defeat and continued to lie about the outcome. But he reserved his strongest vitriol not for President Biden, who won by 7 million votes, but Republicans who he believes didn’t fight hard enough on his behalf.

Frustrated by GOP lawmakers who broke with him over his months-long, falsehood-filled campaign to overturn an election, he expressed particular contempt for the 17 Republican lawmakers who joined Democrats voting to impeach and convict him for his role in inciting a mob of supporters to storm the Capitol on Jan. 6 to stop the counting of electoral votes. Five people, including a police officer, died in the insurrection.

Trump did not speak to the crowd of 1,400 activists about the riot or mention those who partook in it. He focused instead on punishing Republicans who he believes betrayed him in the aftermath, making it clear he would be supporting efforts by more pro-Trump candidates to oust them next year in primaries.

The 90-minute speech to some of his most diehard supporters made clear Trump is unchanged, despite having been defeated electorally and banned from Twitter, his beloved social media platform. CPAC offered him his largest audience ince departing Washington on Inauguration Day, hours before Biden’s swearing-in. The enthusiastic audience erupted in cheers when Trump hinted at another presidential campaign in 2024 by saying his political journey was “far from over.” In continuing to perpetuate the falsehood that the election had been stolen from him, he quipped he “may decide to even beat [Democrats] a third time.”

More than anything, the speech confirmed that Trump’s post-presidential project will be focused on something other than philanthropy or a library: revenge.

Even as he described the GOP as “unified” and tamped down his own talk of forming a third party separate from the GOP, Trump name-checked every lawmaker of his own party who supported the Democratic impeachment effort against him, singling them out as “grandstanders” and calling for their defeats in primaries next year.

Calling Rep. Liz Cheney (R-Wyo.), the No. 3 Republican in the House and one of his most outspoken critics, a “warmonger,” Trump claimed with glee that her poll numbers were going down. “Hopefully they’ll get rid of her with the next election,” he said.

Referring to the group as “Republicans In Name Only,” or “RINOs,” Trump told supporters the more independent lawmakers “will destroy the Republican Party, the American worker, and our country itself.”

He also savaged the Supreme Court, claiming the justices, three of whom he appointed, “didn’t have the courage to act” in backing his legal election challenges that had already been dismissed by dozens of lower courts. “They should be ashamed of themselves for what they’ve done to our country.”

Trump continued to perpetuate the falsehoods that underpinned the attack on the Capitol, claiming again that “the election was rigged.” He called for Republicans to alter state election laws to eradicate mail and early voting, claiming falsely that Democrats “used the China virus to change all the election rules.”

Trump was far more animated in attacking Republicans than he was in going after Biden.

“Joe Biden has had the most disastrous first month of any president in modern history,” Trump said. Deviating from his scripted remarks in the teleprompter, he added: “That’s true.”

Of course, Biden’s approval rating — 56% in last week’s Gallup poll — is higher than Trump’s ever was. And Biden gets even higher marks for his response to the COVID-19 pandemic.

The flatness of his broadsides against his former campaign rival carried the tone of a lament, acceptance of the reality that Biden, now ensconced in the Oval Office, has already set about reversing many of his administration’s policies, specifically with regard to immigration and foreign policy.

Complaining about Biden having rejoined the Paris climate accord and the World Health Organization, Trump suggested Biden had already “gone from ‘America first’ to America last.” And he claimed that the new administration was “recklessly eliminating our border security measures” and triggering “a massive flood of illegal immigration into our country the likes of which we have never seen.”

Although officials at the border are seeing an uptick in attempted crossings that began in late 2020, it’s far smaller than the influx of migrants seen in 2019 after Trump put some of his strictest immigration policies in place. Biden has yet to repeal Title 42, the controversial policy Trump put in place last March in the name of public health that effectively closed the border and pathways to migrate legally.

Trump, who called on Biden to reopen America’s schools and suggested the Democratic administration’s fealty to teachers unions was “a scandal,” sought to claim credit for the vaccination efforts currently underway.

“I handed the new administration what everyone is now calling a modern-day medical miracle,” Trump said, focusing on his administration’s pressure on pharmaceutical companies and the FDA to fast-track the development of a vaccine.

He did not, however, discuss the dearth of distribution plans Biden encountered upon taking office after a transition period in which Trump’s administration refused to cooperate with the incoming officials. But Trump did refer to Biden’s criticism on that score, joking that he “didn’t really know what the hell was happening.”

“Never let them forget, this was us,” Trump said, referring to the country’s ongoing recovery.

Just before Trump took the stage, the conference released the results of its straw poll of attendees — a sign that Trump’s grip on the Republican Party, and its 2024 presidential nomination should he choose to seek it, is not ironclad. Although he was the top choice to be the GOP nominee again in 2024, drawing 55% of the total vote, 32% of the activists present said they hoped he wouldn’t run again, a significant percentage considering the pro-Trump bent of the party’s base.

Two Republican governors who also spoke at CPAC, Ron DeSantis of Florida and Kristi Noem of South Dakota, finished behind Trump in the 2024 straw poll.

Rep. Adam Kinzinger, R-Ill., one of the pro-impeachment Republicans Trump singled out, said earlier in the day that the former president’s focus on retribution would continue to divide their party.

“I think we are a party that’s been for too long peddling in fear, using fear as a compelling way to get votes. And fear does motivate,” he said in an interview on CBS’ “Face the Nation.”

A few other elected Republicans also aired misgivings about Trump’s bid for continuing dominance of the GOP, questioning whether the conservative gathering hosting him reflects the party as a whole.

“CPAC is not the entirety of the Republican Party,” Sen. Bill Cassidy, a Louisiana Republican who voted to convict Trump in his second Senate impeachment trial, said on CNN’s “State of the Union.” Cassidy was one of seven Republicans who joined Democrats in a 57-43 vote to convict Trump, short of the two-thirds tally necessary to convict him.

Without naming Trump, Cassidy urged against “putting one person on a pedestal and making that person the focal point.”

“Over the last four years we lost the House, the Senate and the presidency — that has not happened in a single four years under a president since Herbert Hoover,” Cassidy said in the CNN interview, which aired hours before Trump’s CPAC speech. “If we idolize one person, we will lose, and that’s kind of clear from the last election.”

Even among Republicans who are working hard to remain in Trump’s good graces, some have parted ways with the ex-president’s continuing false claim that the election was rigged.

“Joe Biden is the president,” Scott continued. “We went through the constitutional process. Joe Biden won the election.”

The Florida Republican also pledged support for all Republican senators seeking reelection — a stance that flies in the face of the Trump camp’s threats to mount GOP primary challenges to those deemed insufficiently loyal to the ex-president. Scott said he believed Trump is “going to be helpful” in reelecting incumbent Republican senators, without mentioning those Trump has vocally attacked.