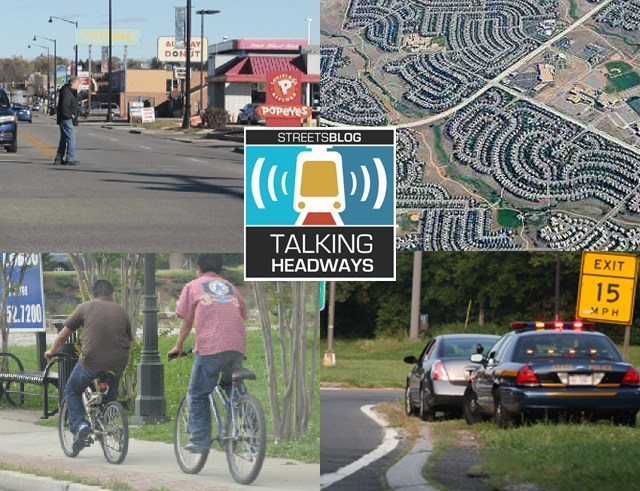 This week, we’re headed back to the Iowa Law Review’s symposium, “The Future of Law and Transportation.” In Part II of this series, Professor Jonathan Levine moderates a panel of four discussing such topics as right of way and public space. The participants are:

For those of you who prefer to read rather than listen, an edited transcript is below the audio player. For a full transcript (with possible typos!) click here.

Here are short excerpts from each discussion:

Prytherch: While there’s a duty for the city to make sure that the street doesn’t kill you with a big pothole, we don’t assume that responsibility in Ohio for the sidewalk. So you start to see there’s some distributional problem. What’s interesting though, is that even the public ownership, there’s a public purpose that has to be behind public ownership of the street. It doesn’t specify what that purpose is; where that purpose starts to come in is those codes that we’ve started to talk about that for the last 100 years, almost that there’ve been uniform vehicle codes in the United States developed by groups that are not really public, but are kind of public, like that promote, for example, uniform vehicle codes that define public roadways as being open for the uses of the public for the purposes of vehicular travel.

OK, here’s the public use and purpose, you know, vehicular travel. That’s a very narrow definition of what the public space of the street is for, but that’s been the dominant definition for a century. Those are just model statutes, but they’re, but they’re adopted in our state traffic codes, which again, if you just want to take a discursive approach to it, those codes are not called mobility codes or transport codes. They’re often called “motor vehicle codes.” And those then define the roadway spaces and the purposes of the space. So the roadway is for vehicular travel. The sidewalk is for pedestrians and it defines what the spatiality is.

And it defines the crosswalk as a hybrid kind of space. And so what we have is the public right of way that’s now, by law, divided up geographically into different corridors. And, and there are different lines that are drawn — and they’re then assigned to modes by definition. But if we want to come back to rights, we want to ask the law, “Well, what right does the law give us to be in the street?” And, interestingly, the rights are really defined in terms of mobility, that we define it in terms of right of way. And this is one of the juiciest definitions for me: this idea of “What is my right?” Well, my right is defined in terms of my right to proceed uninterruptedly in preference to another. So if we want to talk about mobility, politics, what’s more political than one person needing to yield to another in space?

Jefferson-Jones: “Living while Black” is a play on “driving while Black.” Normally, when we talk about “driving while Black,” we are talking about pretextual traffic stops of Black motorists by law enforcement. However, those perils of driving while Black also include the historical challenges that Black people in the United States have faced when attempting to establish and protect their right or freedom to movement or freedom of movement and the use and enjoyment of the open road, whether those rights are imperiled by state law, via law enforcement practices, and other means, or by private actors. The United States has a longstanding history of efforts to keep Black people from enjoying freedom of movement and restricting them from entering spaces that have been racialized as White.

And this is one of the many incarnations of living while Black. In fact, the restriction of Black freedom through the racialization of space is the common thread that ties driving while Black to that broader phenomenon of living while Black and other wild Black hashtags and phenomenons and incidents that people discuss. And so these incidents are not new. They harken back to Jim Crow America and even farther, and the notion that Black people should be restricted to subordinate places, both in the social hierarchy and in spatial hierarchies. And there are some commonalities between now and then namely that law and its enforcers have been used in are being used to draw lines of racist exclusion. So what does it mean for space to be racialized? Property is racialized and space is racialized when it is ascribed a racial identity or character

And that includes the character that includes some and excludes others on the basis of race. So those spaces can be neighborhoods, public parks. They can also include avenues, boulevards, streets, country, roads, and interstates. And so spaces are racialized by people who use and lay claim to them. And the central principle of racial territoriality is that what should be shared space here? The road is being wrongfully claimed in the name of racist exclusion and in the interest of White supremacy.

Goddard: When we talk about traffic safety and just to remind us and, and you may all know, it’s a public health crisis. When we talk about traffic safety broadly, and certainly for people outside of vehicles, it’s disheartening. The statistics have gotten worse and worse each of the last few years: a person is killed while walking every 84 minutes.

So we’re talking about, you know, the equivalent of an airplane going down every few days. And what we euphemistically call “non-documented” because, of course, we default or center the automobile. People outside of vehicles comprise about one out of five of traffic fatalities and almost a third of child traffic fatalities. Walking or bicycling. Here’s what motivates me: where’s the widespread public outcry? Why do we accept this as the cost of doing business? We have this huge perception that walking or bicycling is a very dangerous thing to be doing.

Pérez: Obviously having a sidewalk is not a panacea. If we want a healthier lifestyle, we should have some extra nudges in our food law. If you want to be greener, we need to tighten our vehicle emission standards and reduce the amount of vehicle miles traveled. You make us healthier because people who live in neighborhoods with sidewalks are 48 percent more likely to exercise 39 minutes a day. It makes us greener because if we have sidewalks, there are certain things that we will not do by car. And as we will be talking later, the design standards also may help further reduce emissions and make us safer because sidewalks may produce about 88 percent of crashes between cars and pedestrians.

It make us more socially connected. So social capital goes up in places with sidewalks. Planners are now talking about the sticky streets. The idea that these are places where people mingle and stay around and welfare is just, you know, an extra positive consequence. It seems that real estate value goes up when you have sidewalks. And this conversation would have looked much different. During COVID, we realized that sidewalks were extremely important. If you had children, they were a lifeline because you could take them out and they will burn their energy. If you needed a place to exercise, the sidewalk was the place and restaurants could actually survive then to outdoor dining.