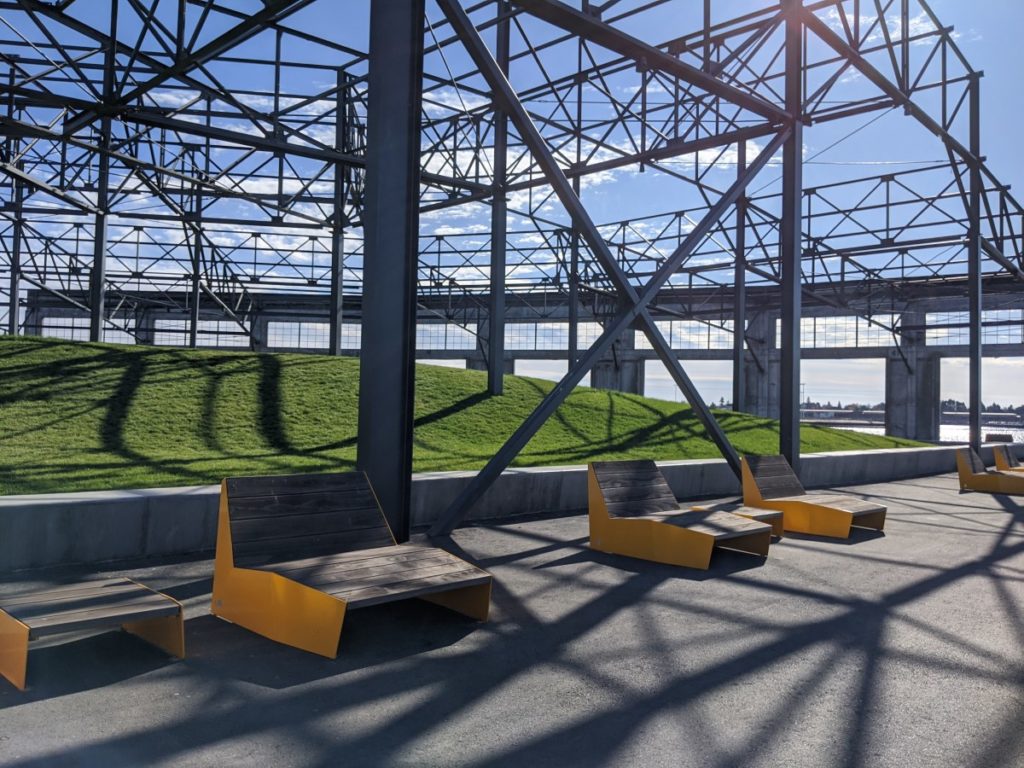 What was once a derelict Oakland pier is now a sprawling, beautiful waterfront park. From this week’s announcement of the opening of Township Commons, a new park in the Brooklyn Basin development:

The first of five public parks planned for the neighborhood, Township Commons sits alongside the Oakland Estuary with picturesque water views to Alameda and San Francisco. Situated adjacent to the beautifully restored 9th Avenue Terminal building, the park provides expansive outdoor space for visitors, neighbors, and residents to enjoy.

“Township Commons is the centerpiece of the new and growing Brooklyn Basin neighborhood and provides a beautiful new community amenity. The space is designed to accommodate small gatherings, performances by local musicians and artists, and other community activities, which we plan to offer when it is safe to do so,” added Michael Ghielmetti, founder of Signature Development Group, the company that developed Brooklyn Basin’s master plan, in a prepared statement.

The San Francisco Chronicle‘s urban design critic, John King, did a great review, in which he called the park “…a startling act of urban reinvention that, with time, should pull people from across the city to an area that until now has been off the map.”

Design-wise, King is absolutely right. But as to pulling people in from across the city? Sure, if they’re very brave and confident cyclists–or if they drive a car.

The park is part of a development that was sold as green and accessible by bike.

As Streetsblog pointed out before heavy construction began, it isn’t.

The construction of Brooklyn Basin included a complete redo of the portion of the Oakland Embarcadero that connects it to the rest of Oakland and, importantly, the nearby Lake Merritt BART station. After years of work, the street got new sidewalks, plantings, drainage, and pavement. But the “bike lanes” they added are just standard, retrograde gutter-pan stripes, with the usual, predictable results: despite all the parking lots, parking lanes, and structures for parking readily available just a few feet away in Brooklyn Basin, the “bike lane” was completely blocked this morning by parked cars, as seen below:

The Oakland Embarcadero rebuild was a screamingly obvious opportunity to add a wide, separated, two-way curb-height bike facility to the right of those plantings. For money that would have amounted to a rounding error, they could have built a bike path that could be safely used by novice cyclists, children, and the spandex-clad, two-wheel road warriors alike.

Instead, Bike East Bay was forced to expend precious advocacy energy just trying to get some painted buffers and intersection treatments. That helped, but at the end of the day, it’s still just paint. Cyclists are left jockeying for position with illegally parked cars, big rigs, and panel vans, as seen below:

Some improvements are still coming, at least on parts of it. Bike East Bay’s Robert Prinz tells Streetsblog that “…bikeway protection on Embarcadero will be added at least for all the curbside buffered sections between 5th Ave and 10th Ave, and 5th Ave will be rebuilt with protected bikeways from Embarcadero to E 8th. This was originally estimated to be installed in 2019 but then construction got pushed back.” Prinz says construction is now planned for spring, 2021. However, that still leaves the unbuffered sections, which includes the photograph with the parked cars. It also leaves the Embarcadero bridge bike lane with no protection. And that’s a real shame–and a lost opportunity to build a top-notch bike connection that would be safe for riders of all ages and abilities.

As the Chronicle covered, the park is truly lovely once one gets to it. It’s even a nice place to tootle around on a bike once inside. But if you want to enjoy it with your family, be sure to pack your kids and your bikes into a nice big SUV for the trip there. Don’t worry, you won’t have any trouble finding parking inside this supposedly “green” development.

Note: The San Francisco Chronicle’s John King told Streetsblog he biked to the park through Oakland to do his story, but he finds riding the Embarcadero so nerve-wracking that he rode its sidewalk on the way back.