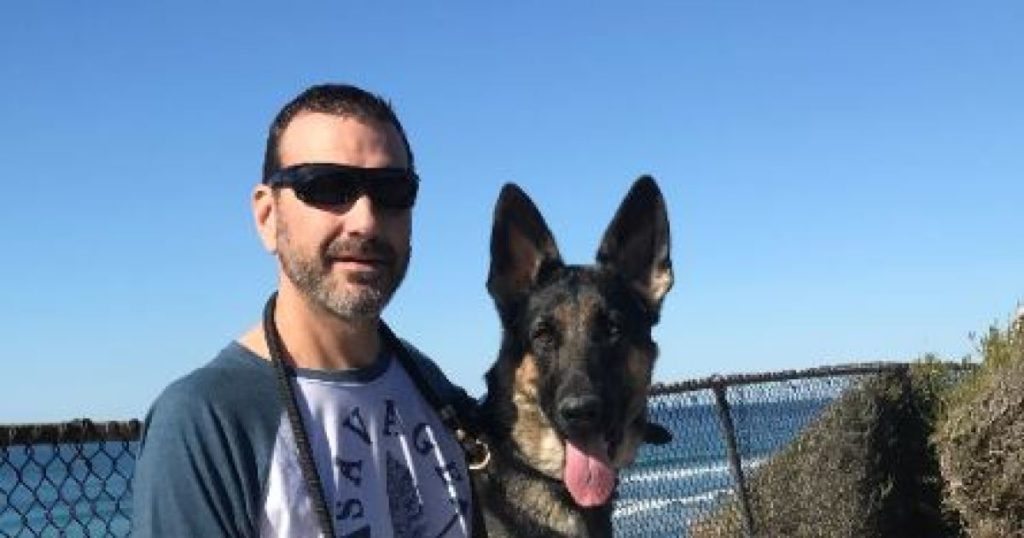 Since the massacre in Baghdad 13 years ago, Jeremy Ridgeway has done just about everything right.

The former Blackwater security contractor and Southern California resident pleaded guilty to manslaughter, admitting his role in killing 14 Iraqi civilians and wounding 17 others. He testified against four Blackwater guards, who were convicted and sentenced to stiff prison terms. He dedicated his life to volunteering at his church and training service dogs for veterans.

His cooperation was so extensive, his contrition so genuine that a tough-on-crime federal judge told him he was the most “unusual defendant to appear before me because I can’t think of a case where I’ve had stronger feelings myself about your commitment to change your life to do the right thing, to atone, and I’m very proud of you.”

Yet, when President Trump announced pardons the Tuesday before Christmas for the four other Blackwater guards responsible for the slaughter at Nisoor Square on that bloody, September Sunday, Ridgeway was left out in the cold. Trump granted the men, who had fought their convictions and denied culpability, unconditional clemency. They were freed from prison, their records wiped clean.

Ridgeway was perplexed. Justice Department guidelines say that a pardon is “ordinarily a sign of forgiveness and is granted in recognition of the applicant’s acceptance of responsibility and established good conduct.” If anyway had satisfied such guidelines, it was him.

“Once the president pardoned those guys, how can he not pardon me?” said Ridgeway, 59, in his first interview since the shooting. “I accepted responsibility. I did the right thing. I testified. This is a matter of principle.”

Trump’s clemency of the contractors is emblematic of how he has wielded power, favoring those with access to the White House often over the judgment of experts, who in this case were prosecutors, FBI agents, jurors and a federal judge. The Blackwater pardons foreshadow what is likely to be a flurry of controversial grants of clemency as Trump’s presidency nears its end Jan. 20, with the winners being those who can spin tales that align with Trump’s worldview and grievances.

A former Army soldier and national guardsman, the muscular 6-foot-3 Ridgeway arrived in Baghdad in 2006 as a guard for Blackwater Worldwide, the security firm contracted to protect State Department personnel.

Ridgeway, then 35, had been in Iraq before, serving in 2004 and 2005 with the California National Guard. He needed a job, knew the risks and liked being part of a team under fire. The Blackwater pay wasn’t bad, either — $500 a day.

He was assigned to Raven 23, a quick reaction team based in the fortified Green Zone that supported other security details when they ran into trouble.

Many of the guards, like Ridgeway, were former military and craved action. What happened next has been revealed in trial transcripts, affidavits and other court filings:

Raven 23’s members were run down, angry and felt besieged.

They trusted no one in Baghdad, which was being rent by sectarian violence. Their team had been fired on repeatedly on missions and had even been led by Iraqi police into an ambush. Ridgeway’s lowest moment came when he extracted the remains of teammates who had been executed by insurgents while trapped in a downed helicopter.

On Sept. 16, 2007, just before noon, Raven 23 was dispatched to assist Blackwater convoy protecting a State Department official not far from a car bombing.

Ignoring orders to wait near the Green Zone’s exit, the convoy raced to nearby Nisoor Square, a bustling round-about.

Raven 23 stopped in the circle. Traffic halted. For Iraqis, this was a near daily occurrence in a war zone. As Ridgeway’s team waited for the convoy to clear out, the shooting started. A sniper in one of Raven 23’s vehicles shot dead the driver of a white Kia, 19-year-old Ahmed Al Rubia’y, who had pulled his car to a stop. The bullet pierced Al Rubia’y’s brain; his foot slipped off the break, and his car rolled forward. Ridgeway and other guards opened fire. The passenger, a doctor and mother of the Al Rubia’y, was killed.

The team didn’t stop firing for about five minutes. Using machine guns, rifles and grenades, the contractors mowed down those who leapt from cars, hid under vehicles and ran for their lives. By the time the convoy pulled out, at least 32 were dead or wounded.

Ridgeway and other Raven 23 members claimed they had acted in self-defense. They had been fired on, or seen insurgents, they said.

As time wore on, Ridgeway became torn. He was lying. He knew he and his teammates were covering up a blood-letting. Admitting he and the other guards fired without provocation, he pleaded guilty in Washington’s federal court to manslaughter and attempted manslaughter. He said he was the one who killed the doctor in the Kia, and he had maimed an innocent man. The charges carried a combined maximum penalty of 17 years in prison.

He knew he would be attacked as a snitch. But he no longer could live with the lie.

He added that he wanted his family to “know I did something right in the end, after doing something bad, horrible. I needed to repent.”

Five other guards had secured excellent attorneys and and in 2009 won a ruling tossing out their indictments on manslaughter and weapons charges.

Two years later, the ruling was reversed. In the trials of four guards (the Justice Department dropped charges against the fifth) Ridgeway became star prosecution witness. He described how he and the other contractors had fired indiscriminately on the Kia’s occupants and other civilians. He told jurors that a guard had bragged he had “popped the grape” of the Kia’s driver. Another contractor told Ridgeway he had “smoked” a man doing nothing more than standing near the car.

He answered directly when asked by a prosecutor if he had seen insurgents, had received incoming fire, had perceived any threats.

“And you understand you were shooting at unarmed people?”

“I do understand that, sir.”

“Is that a day you wish you could take back?”

The defense grilled Ridgeway and argued he inflicted far more carnage than the other guards. They painted him as a liar, noting he had lied about having received incoming fire. He had lied on forms to be hired by Blackwater. He had lied when he told relatives he had done nothing wrong.

“Could there be a more incredible witness?” Brian Heberling, a defense lawyer representing Paul Slough, told jurors. “He is a complete fraud. How many lies could this guy admit to?”

In the end, jurors believed Ridgeway. The four Blackwater guards were convicted in 2014 for their roles in the massacre. Three were convicted of manslaughter and firearms offenses; a fourth of first-degree murder. An appeals court jettisoned the first-degree murder conviction, ordering a new trial, and ruled the sentences for the other three were too stiff. U.S. District Judge Royce C. Lamberth re-sentenced the manslaughter trio in September 2019, giving Slough, Evan Liberty and Dustin Heard from 12 to 15 years in prison.

The fourth guard, Nicholas Slatten, was retried in 2018. The jury failed to reach a verdict, so prosecutors tried again. He was convicted of first-degree murder, accused for having fired the first shot that killed Al Rubia’y.

At his sentencing, Slatten accepted no responsibility for wrongdoing. “I am innocent,” he told Lamberth. “I did not shoot the driver of the white Kia. I never shot at his car. In this trial he was not the only victim, I am a victim.”

Lamberth, who had served in Vietnam, rejected Slatten’s arguments that the guards had been defending themselves. “The jury got it exactly right, and this was murder,” he said.

He sent Slatten to prison for life. Four years earlier, Lamberth had sentenced Ridgeway to a far more lenient term — a year and a day in prison — because he had cooperated and done the right thing. At sentencing, Ridgeway apologized to the victims and the Iraqi people.

“I am and remain heartbroken,” he told Lamberth. “My actions were thoughtless and impulsive. I made a terrible mistake. I cannot turn back time and correct my mistake. God, how I wish I could.”

Even before Slatten was sentenced, Trump was being lobbied to grant the men pardons, according to people familiar with the matter.

The guards’ supporters and families created the website http://www.supportraven23.com/ around 2014 to provide facts about the case. In more recent years it has lobbied for pardons, labeling the contractors the “Biden Four,” claiming they the men were “sacrificed for politics and convicted by lies.”

The nickname stemmed from a visit in 2010 by then-Vice President Biden to Baghdad, where he had pledged the Justice Department would appeal an adverse judicial ruling and continue the prosecutions.

The contractors’ advocates claimed the men had been victims of overzealous prosecutors acting with political motives. Such a theme was sure to stoke the interest of Trump, who has long branded federal investigations into his actions as witch hunts.

The men and their families also had powerful advocates. Blackwater’s billionaire founder, Erik Prince, is the brother of Trump’s education secretary, who just resigned, and is known to have the ear of the president and his top advisors. The campaign got a boost from Pete Hegseth, a Fox News personality who had successfully pushed Trump to pardon service members accused of war crimes, and at least nine Republicans in Congress, the White House disclosed.

The appeals were pitch perfect for Trump. Aggressive prosecutors? Check. A corrupt Biden? Check. The final ingredient: a lying cooperator, Ridgeway, whom the website ominously labeled “the fifth man.” Trump has long disdained cooperators, referring to them as rats.

Current and former Justice Department officials reacted with dismay to the pardons.

Retire FBI agent John Patarini, who initially led the investigation into Nisoor Square, said nobody should be pardoned for their roles in Nisoor Square. It makes even less sense, he said, to grant clemency to four convicted by juries and not give one to the man who admitted his guilt.

“He was the only guy who cooperated with the government,” Patarini said. “He is the only one who still carries a felony conviction. He doesn’t get to vote. He can never get a security clearance. He can’t own a firearm. The guys who were convicted of killing innocent people? They can own a firearm.”

“If you are going to pardon four,” Patarini said, “you need to pardon Ridgeway.”

Most of the contractors’ lawyers declined to comment, but William Coffield, who represented Liberty, said it was not surprising that Ridgeway didn’t get a pardon.

“The individuals who were pardoned and their attorneys have maintained, and continue to maintain, their innocence,” Coffield said. “Jeremy Ridgeway and his attorney have, for 12 years, maintained that he is guilty of manslaughter. It should, therefore, come as no surprise they were treated differently for purposes of a pardon.”

Ridgeway’s attorney, William Sullivan, says he will work to win his client clemency through proper channels at the Justice Department.

“Only one Blackwater guard, Jeremy Ridgeway, honorably acknowledged his actions, courageously accepted responsibility for them, and committed himself to the truth in order to achieve both his own personal atonement, and to deliver a measure of justice for the victims and their families,” Sullivan said.

Ridgeway doesn’t begrudge the other guards for receiving pardons, and he won’t criticize Trump’s decision. “It’s the president’s prerogative” is all he will say.

He lives in Southern California with his wife and two kids (he will not be more specific than that). He dabbles in trading stocks and odd jobs to supplement his wife’s income as a schoolteacher. He keeps busy working with wood and tinkering on his Jeep Wrangler, playing golf and exercising. He trains service dogs.

Ridgeway said he hadn’t given clemency much thought.

But now that Trump has pardoned the others, the former guard asked, shouldn’t the man who atoned receive one, too?