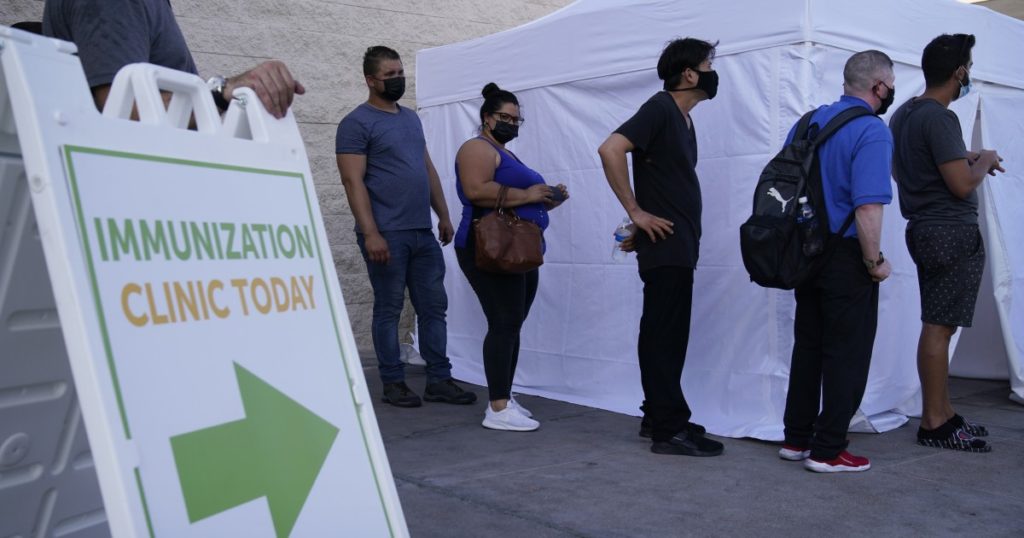 President Biden on Friday targeted social media platforms like Facebook for allowing the spread of misinformation about COVID-19 vaccines as many Americans’ resistance to getting shots has left wide swaths of the country vulnerable to the more contagious Delta variant.

The president’s remark in answer to a reporter’s question came at the end of a week in which the White House began to push back more strongly against misinformation about the safety of COVID-19 vaccines, blaming it for some Americans’ unwillingness to get their shots.

Although caseloads remain far below those at the pandemic’s worst moments, the number of infections is increasing in every state, and rising numbers of deaths are expected in the coming weeks.

Roughly half of the country is fully inoculated and the vaccines remain effective against the Delta variant, limiting the potential devastation from the growing outbreaks. But the latest infections could herald a wave of unnecessary deaths in the world’s richest nation with the largest stockpile of readily accessible vaccines.

The resurgence of COVID-19 cases represents a setback for Biden, who staked his presidency on ending the pandemic and ushering in an economic recovery. The increases are greatest in areas that favored his rival, former President Trump, reflecting the politicization of the pandemic response in the prior administration, which left many conservatives averse to wearing masks, social distancing and, ultimately, getting vaccines.

Unlike an increase in caseloads that occurred in April, the current outbreaks are happening at a time when anyone who is at least 12 years old can easily get vaccinated. The country is now averaging 26,300 new cases per day, a 70% increase from the previous week, and 2,790 hospitalizations, a 36% increase. Deaths have started to rise as well, increasing 26% to an average of 211 a day nationwide.

“Each COVID-19 death is tragic,” said Jeff Zients, the head of Biden’s task force on the pandemic response, at a briefing Friday. “And those happening now are even more tragic because they are preventable.”

Polls show that Republicans are much less willing than Democrats and independents to get vaccinated, and right-wing media and conservative politicians have encouraged skepticism of the shots.

Laura Ingraham, a Fox News host, described as “creepy stuff” a door-to-door outreach campaign that the Biden administration has promoted. Tucker Carlson, who has the network’s highest-rated show, described the vaccination campaign as “the greatest scandal in my lifetime.”

Sen. Ron Johnson (R-Wis.) has baselessly suggested that side effects of the vaccines can cause death.

Alarmed by such falsehoods, the Biden administration is fighting back. Surgeon General Dr. Vivek Murthy issued his first formal health advisory on Thursday, warning that misinformation around COVID-19 vaccines poses an “imminent and insidious threat.”

Such advisories are typically issued to warn Americans about such matters as the dangers of tobacco use or the opioid epidemic; Murthy’s bulletin was the first to target misinformation.

Although falsehoods have circulated during previous public health crises, notably including the HIV/AIDS epidemic, Murthy said the speed with which rumors now can spread online required strong action. He urged social media companies to be more aggressive in limiting misinformation on their platforms.

Facebook did not immediately respond to a request for comment. The company has previously emphasized that it has removed millions of examples of COVID-19 falsehoods and added features that direct users to accurate information.

Senate Minority Leader Mitch McConnell (R-Ky.), who suffered a childhood bout with polio before he could get vaccinated against the disease, said at a news conference Tuesday that people need to get inoculated.

“We need to finish the job,” he said. “Part of it is just convincing the American people of the importance of doing this.”

Ashley Kirzinger, associate director of public opinion and survey research at the Kaiser Family Foundation, said the country needs “trusted messengers” — such as family members, friends and healthcare providers — to promote vaccines to hesitant people in their communities.

Besides encouraging those conversations, the White House has been cycling through different tactics to boost vaccinations. After phasing out operations where thousands of people could get their shots each day, health officials are focusing on mobile clinics, pharmacies and doctor’s offices.

Vice President Kamala Harris and her husband, Doug Emhoff, have traveled around the country to promote the vaccines. So has First Lady Jill Biden, who has swung through red states including Tennessee and Texas.

More attention has been paid to young people as well. Dr. Anthony Fauci sat down for interviews with influencers on TikTok, a popular video platform, and Olivia Rodrigo, the popular 18-year-old singer, visited the White House on Wednesday, joining Biden and Press Secretary Jen Psaki to publicly urge youths to get vaccinated.

Although young people are generally less susceptible to the coronavirus, health experts warn that they can still fall seriously ill or transmit the disease to more vulnerable people.

Ultimately it may be the new threat from the variant that gives previously skeptical people an incentive to get shots. Zients said that the five states with the highest infection rates — Arkansas, Florida, Louisiana, Missouri and Nevada — have recently seen higher rates of new vaccinations exceeding the national average.

The Delta variant, which was first detected in India, is responsible for more than half of COVID-19 infections in the U.S. It appears contagious enough to increase infections among unprotected Americans even in heavily vaccinated places like San Francisco. Although 76% of residents there over 12 years old have been fully inoculated, cases and hospitalizations have begun ticking up, according to data shared by Dr. Bob Wachter, who chairs the Department of Medicine at UC San Francisco.

Los Angeles County has also seen a surge of new infections, with the average daily caseload jumping from 173 in the middle of June to 1,077 this week. County officials announced that everyone, regardless of vaccination status, will need to wear masks while indoors in public settings starting Saturday night.

Federal health authorities said booster shots do not appear necessary to protect those who are fully vaccinated against the variant, but Zients said the government is prepared if research shows otherwise.

“We are ready for whatever the science tells us,” he said. “We’ve secured enough vaccine supply.”