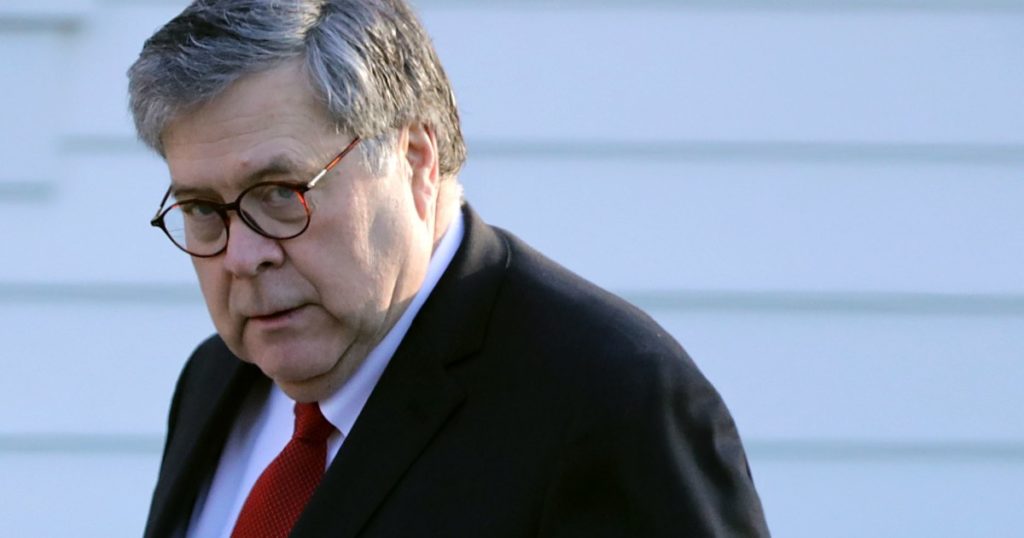 In the end, even the most loyal Trump servant wasn’t loyal enough.

When Atty. Gen. William Barr announced his exit on Monday, it was tolerably clear that President Trump was the driving force behind the departure, even though the White House insisted the decision was Barr’s.

The first notice came from — of course — a Trump tweet, after his meeting with Barr on the question of voter fraud allegations in the 2020 election. Barr made a point of noting the topic in his resignation letter, which was larded with slavish praise for the president’s accomplishments in the face of what Barr called “relentless, implacable resistance.”

Barr enraged Trump with two acts of disloyalty after a tenure in which he willingly bent norms, rules, laws and even facts in the political service of the president.

The first infidelity was Barr’s announcement that the Justice Department had uncovered no evidence of widespread voter fraud that could change the outcome of the 2020 presidential election.

That declaration placed him on the side of the sane, but it stands in contrast to the scores of Republican legislators and tens of millions of GOP voters who remain committed, in some cases violently, to the president’s fantasy of a hijacked election.

Barr’s second sin, one probably far more galling to Trump, relates to the revelation last week that the Justice Department had been investigating Hunter Biden on federal money laundering and tax charges since before Barr joined the administration.

This nugget was the very prize Trump had gotten impeached over: Our president shook down Ukraine’s President Zelensky to get him to announce an investigation into Hunter Biden’s role in a Ukraine energy firm. Trump would have ceaselessly exploited any sign of a Biden inquiry, using it as a talking point to insinuate moral laxity on the part of his rival.

What an infuriating irony that such political treasure was in his faithful attorney general’s hands all the time. Adhering to Justice Department guidelines, Barr didn’t pass it along or make it public. Trump let his rancor be known: His attorney general was a “big disappointment!” “Why didn’t Bill Barr reveal the truth to the public before the Election, about Hunter Biden?” he tweeted. According to White House reporters, he vented his fury more fully behind the scenes.

Does Barr’s late-blooming lack of obeisance make up for the rest of his tenure as Trump’s lackey? That’s the core question in evaluating his legacy.

There’s no getting around Barr’s dishonorable record, starting with his public dissembling about the Mueller report and subsequent shameless whopper that the report exonerated the president.

Barr’s pit-bull dedication to the president’s political fortunes extended to his tendentious intervention in the cases of Trump cronies Michael Flynn and Roger Stone, his acquiescence (at the least) in the heavy-handed treatment of protesters in Lafayette Square in June; his unfounded public statements supporting Trump’s pre-election allegations of widespread voter fraud; his failure to stand behind — indeed his willingness to berate — the Justice Department’s career staff, and his October appointment of John Durham as a special counsel, assuring that Durham’s review of the Trump-Russia investigation will continue under the Biden administration. (One can imagine a certain vindictive pleasure here, knowing the next attorney general will feel hamstrung about controlling Durham as Barr plainly felt with Robert S. Mueller III.)

At his confirmation hearings, Barr made it a selling point that he had nothing left to prove. He was then, from all appearances, an institutionalist. His record as attorney general in the George H.W. Bush administration caused many people, including me, to be unduly sanguine about his independence when Trump selected him in 2018.

He hasn’t regained his lost reputation as an institutionalist. On the other hand, I don’t believe Barr admires Donald Trump or is afraid of him. Barr’s actions instead reveal him to be a political partisan, a defender of the Republican Party, a true believer in an outsized executive and, as recent public statements show, a staunch advocate of antediluvian social views.

Most of all, as his record in office and his resignation letter make clear, Barr supposes — against the evidence in my view but with fervent conviction — that the Mueller probe and the investigations into the Trump campaign that began in 2016 were indeed politicized and baseless. His outrage was so strong that it either blinded him or let him rationalize conduct that he must know did not befit an attorney general.

Barr’s overall record is worthy of Roy Cohn, the kind of amoral, demon lawyer Trump openly longed for. But he did draw a line, and not a trivial one, when it came to promoting the president’s cockamamie attack on the election and Trump’s malicious counteroffensive against Joe Biden and his son.

Imagine how the last six weeks might have played out had Barr chosen to break one or two more norms and rules, if his devotion to partisan service had been as boundless as the president demanded. As it is, Trump’s big disappointment is the country’s big escape. Barr devotees and detractors, and presidential historians, will be chewing on that one forever.