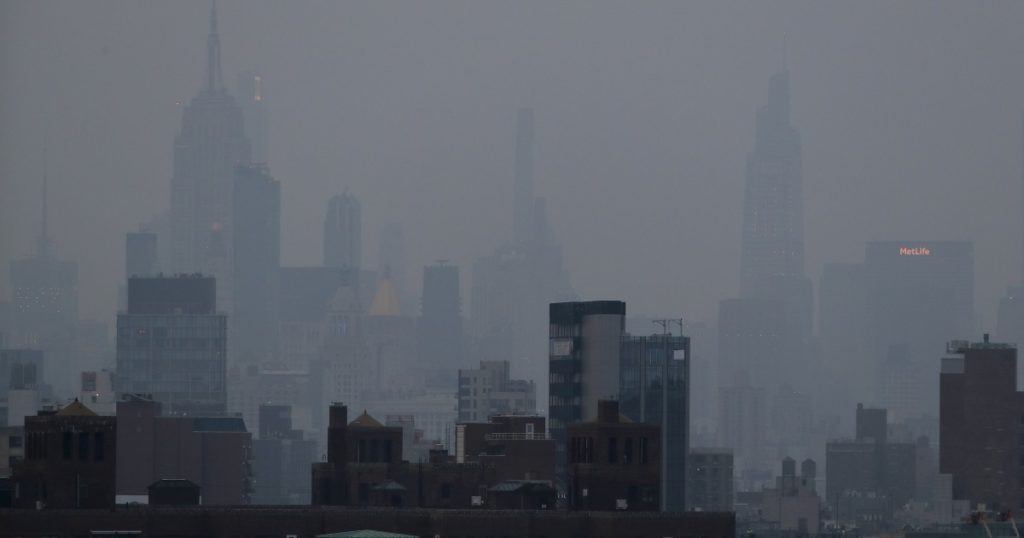 Two weeks ago, one of America’s best-known climate scientists set off onto Ontario’s Lake Joseph for an evening of stargazing, as she had almost every summer of her life.

From her boat, the night sky, which should have been brilliant, was obscured by smoke.

“It was a clear night, but you couldn’t see the stars,” said Katharine Hayhoe, the Canadian-born chief scientist of the Nature Conservancy. “The sky was bronze. The lake was bronze. You could smell smoke. We’re not used to that here.”

In Canada, as in the United States, this has been a summer of catastrophic wildfires, from British Columbia and the Yukon east to Manitoba and Ontario.

The smoke has drifted as far east as New York, where the brown haze helped give Manhattan its worst air quality in 15 years.

Environmentalists have long warned that Canada’s vast boreal forest was becoming drier and more flammable, but few had expected a fire season as explosive as this or focused on the degree to which climate change would bring California-scale fire dangers to Canada’s north.

“We’ve paid attention to other signs of warming,” said Hayhoe, who was born in Toronto but now lives in Texas. “The seasons have been shifting, invasive species are coming in, we’ve seen flooding in Toronto and Ottawa. But nobody’s talked about wildfires before.”

But the impact on the rest of the globe could be greater.

By most estimates, the boreal forests that stretch from Alaska to eastern Canada and across Siberia absorb more carbon dioxide — the main cause of global warming — than the Amazon and other tropical forests.

Fires occur naturally in the north; they’re part of the forest lifecycle. But scientists say this year’s blazes, made more intense by hot weather and drought, are abnormal and more dangerous.

“When fires get intense or burn hot due to drought, combustion often removes most or all organic matter in the ecosystem,” said Merritt Turetsky, director of the University of Colorado’s Institute of Arctic and Alpine Research.

After high-intensity fires, “vegetation is slower to recover,” she said. “We are starting to see happen more, as a result of climate change, the creation of what look like moonscapes.”

Which means some of the capacity of the northern forest to absorb greenhouse gases may be lost for a long time even as smoke from the fires worsens global warming in the short run.

In that sense, Canada’s fires affect Americans as much as Canadians.

Canada already requires its timber industry, an important part of its economy, to practice sustainable forestry; loggers replant as many acres as they cut.

The only long-term answer to the problem is the difficult one you already know: serious efforts to slow global warming through reduced emission of greenhouse gases, especially from fossil fuels.

And on that, Canada — even though its economy depends more on oil and gas than the United States — is ahead.

It has a national carbon tax, an idea that once had some bipartisan support in the United States but never enough to pass.

Canada’s tax adds about 22 cents (U.S.) to the price of every gallon of gasoline; Prime Minister Justin Trudeau has promised to increase the rate to a whopping $1.22 a gallon by 2030. Most of the revenue is returned to taxpayers; the purpose of the tax is to act as a disincentive to fuel consumption.

Even the opposition Conservative Party has accepted a carbon tax in principle, although it says Trudeau’s proposed increases are too big. Conservative leader Erin O’Toole warned his party this spring that it could not “ignore the reality of climate change” if it hoped to win — a contrast to conservatives in the U.S.

They’ve already absorbed the lesson of this summer’s wildfires:

The effects of global warming are no longer confined to a few vulnerable regions. They’re visible from the Pacific Northwest to eastern Canada, from Siberia to southern Europe and South Asia.

It is a problem that can no longer be deferred — in Canada, California or anywhere else.