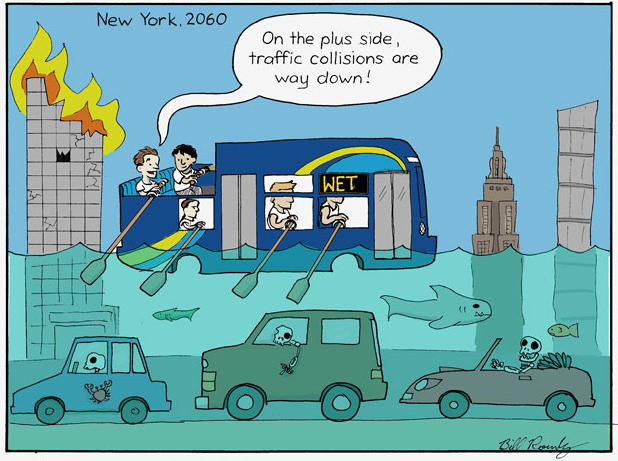 Like everyone else who cares about the future of human civilization on this planet, our editorial cartoonist Bill Roundy was horrified, scared and angered by the recent United Nations report suggesting that humanity now has the narrowest of windows to act if it is to survive human-induced global warming.

He took that fear, fright and rage and started scouring the web for inspiration — and found himself more fearful, more frightened and more angry over how few analysis pieces really delved into how quickly and fundamentally we need to change the way we get around. Yes, there were pieces about how we need to green up the electrical grid and eat like 98 percent less meat (all true!), but very few of our elected leaders were able to look voters in the eye and tell them that they need to stop driving so much. (Transportation is the single biggest contributor to greenhouse gases in America today.)

“So I came up with this simple idea, but I don’t think it’s too simple,” Roundy told us. “It’s about the entitlement that car drivers feel about being able to drive wherever they want whenever they want. It’s the same entitlement that makes them choose climate-destroying cars instead of just taking the bus like the rest of us.”

Our guess is that drivers will keep exerting their entitlement to the very end, unchallenged by a political class that is dominated, alas, by drivers (check out Gov. Cuomo getting into his muscle car after his resignation speech on Tuesday). Hence, Roundy’s take.

All of Bill Roundy’s cartoons are archived here. Collect ’em all.