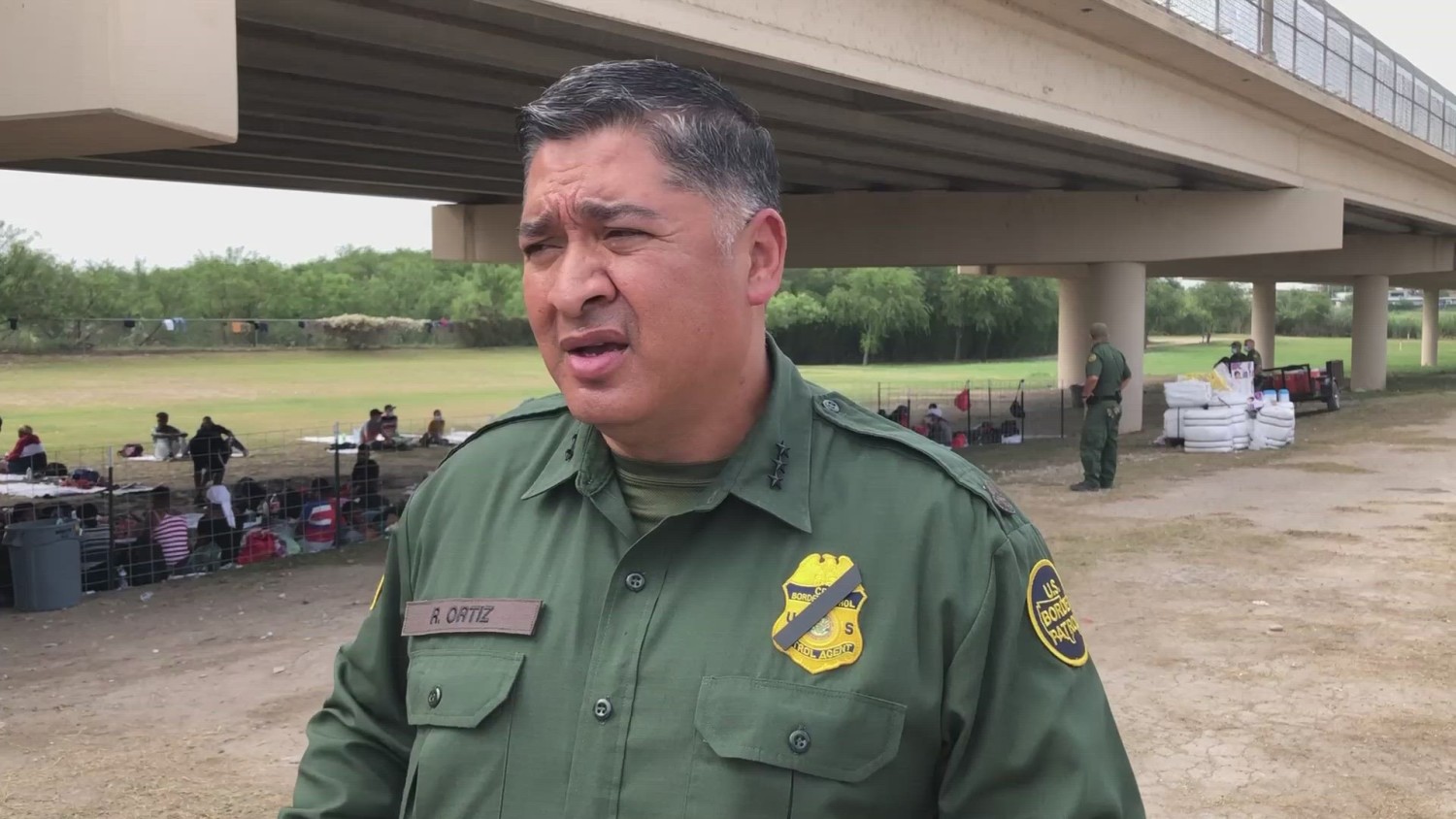 When ranch manager Cole Hill saw the back door of a house he was supposed to be guarding kicked in last Saturday, he suspected migrants had broken in.

Hill, 31, a father of three small children, had responded to a break-in earlier that day and the past Thursday at the 8,000-acre Gun Hill Ranch about 100 miles west of San Antonio. Never had he seen so many migrants stream through the West Texas outpost, hundreds trying to skirt a nearby U.S. Customs and Border Protection checkpoint. He started carrying a 9-millimeter handgun on his hip.

Hill figured migrants he saw inside the house might have discovered the guns there, too. So he entered with his gun drawn. Several migrant men fled ahead of him out another door, dropping a rifle and shotgun they had been loading and scattering ammunition. The men were caught the next day by the Border Patrol, he said, armed with knives stolen from the house. Hill pressed charges against them for trespassing under a new order issued by the Texas governor in response to what he has called a border crisis of the Biden administration’s making.

“We’ve been abandoned by this administration,” Hill said as he stood on the ranch this week beside his pickup, its bed full of migrant trash he’d gathered. “I don’t want to have to defend myself out here.”

Local ranchers accustomed to raising cattle, deer and exotic game on remote spreads north of the border have been alarmed to see migrants approach their homes for the first time, walking up to children as they play outside. They’re seeing authorities pull migrants from cargo trains and grain elevators — some living, some dead. Sixty-four remains have been found so far this year, compared with 20 last year, according to the Border Patrol. Migrants are appearing on ranchers’ security cameras, breaking into homes and stealing cars.

The uptick has rattled the Del Rio area and conservatives nationwide, who have made it their battleground for border policy just as residents prepare for hunting season, when they fear shootings may erupt.

Gov. Greg Abbott has called a special session of the state Legislature starting Saturday to address, among other things, border security, including, “enhancing criminal laws or providing funding from unappropriated available revenues to support law-enforcement agencies, counties, and other strategies as part of Texas’ comprehensive border security plan.”

Last month, Abbott — who has devoted state money to finishing Trump’s border wall — issued executive orders allowing residents to press charges against migrants for trespassing and against those who transport them, but the latter has so far been blocked by the federal government in court.

When Vice President Kamala Harris visited the border earlier this year, Abbott excoriated her for skipping Del Rio in favor of El Paso, a much larger city farther west that has seen a fraction of the migrant traffic. Abbott held a border summit with Texas sheriffs in Del Rio, met with border lawmakers and residents and declared the area a federal disaster necessitating government aid. He sent scores of state troopers there for “Operation Lone Star” to supplement the Border Patrol, summoned National Guard troops and added law enforcement from Texas, Florida, Iowa, Nebraska and Ohio. They were still camped this week in military-style tents at the county fairgrounds.

More than 120 migrants have been charged with trespassing in the county surrounding Del Rio since the governor’s order, according to County Attorney David Martinez. The migrants were being held at a state prison and, if convicted, face up to a year in jail, Martinez said.

Migrant advocates sent a letter to Texas officials Friday complaining that of at least 200 had been detained, more than two-thirds had been denied access to public defenders and some had been separated from their families.

“Governor Abbott is attempting to unilaterally make and enforce his own immigration policy for Texas,” said Kate Huddleston, attorney at the American Civil Liberties Union of Texas.“This unconstitutional effort is leading to rampant civil rights violations.”

Martinez said detained migrants had difficulty accessing attorneys because prison staff “are not used to dealing with non-convicted individuals.” He said it’s state policy not to separate migrant families, but that several men had mistakenly been separated from their families, charged, released and reunited.

Later this month, local ranchers will start rounding up livestock from remote grazing areas, where they’re likely to encounter migrants trying to evade capture. Next month, dove hunting season begins, followed by duck, quail and deer, big business on local ranches that draw more than 100,000 people, many armed and unaccustomed to stumbling across migrants.

“With hunting season, things are going to get ugly,” said John Sewell, 55, who runs a hunting ranch about 50 miles north of the border near Uvalde. “We’re on edge.”

Sewell has lost countless miles of fencing to migrant damage, which costs $25,000 a mile to replace, and complains that the foreign nationals have more rights than landowners. Sitting on his porch with him and his hounds this week overlooking a field where whitetail deer grazed, neighbor Larry Smith, a retired petroleum engineer, agreed.

Many of the migrants crossing now turn themselves in to the Border Patrol, the men noted. Their identification cards and other paperwork were strewn across the banks of the Rio Grande this week, shed as they arrived. But others try to evade capture. Those are the groups ranchers said they encounter in the brush who sometimes turn aggressive.

“That’s going to get somebody killed,” said Smith, 72, a .45 handgun at his side as it always is these days. “That’s the question for all of us: Once confronted, what do we do?”

Uvalde Mayor Don McLaughlin Jr., a conservative Republican, said the state deployment has helped catch smugglers and reduce the number of high-speed chases, but that smugglers caught recently were all armed.

“In southwest Texas along the border it’s become the wild, wild west again. There is no rule of law,” he said.

Laura Allen, a Republican former leader of the county surrounding Del Rio, worries that when she soon rounds up livestock or hunts with her 9-year-old they may stumble across migrant bodies or smugglers.

Unlike the Rio Grande Valley to the east, home to more than 1.5 million people, Val Verde County has a population of about 50,000, more than half in Del Rio. Neighboring Kinney and Uvalde counties’ populations are even smaller. This time last year, fewer than 25,000 migrants had been encountered in the area by the Border Patrol. This year, the agency has encountered more than 149,000 migrants as smugglers pushed west from the Rio Grande Valley as they did during the last surge in 2019. This week, there were at least 150 Mexican and Central American migrants camped in a park waiting to cross the Rio Grande in Del Rio’s sister city of Acuña.

“For years I was always proud to say we didn’t have the problems that El Paso, the [Rio Grande] Valley or Laredo had. We’ve always been the middle ground,” Allen said, but for smugglers, “Eventually, the middle ground is the only ground. You just funnel it through.”

When the number of migrants started spiking last winter, Lozano called for federal assistance, but said the Biden administration ignored him.

“The administration can’t say I didn’t forewarn them,” Lozano said this week as he sat in his office in front of a framed antique Texas flag. “We have an immigration crisis, a surge. They’ve abandoned us.”

Lozano said he appreciated Republican lawmakers sending added law enforcement to the area, but that a month later, “they have not deterred migrants.” This week, he saw agents catch a migrant family while he was kayaking a downtown spring. There have been high-speed chases through town and schools placed on lockdown after migrants approached.

“It started as a joke,” he said. “They’re not laughing anymore.”

He said there’s also concern that migrants are not being tested for COVID. Lozano has refused to do the testing because he fears the city would be stuck caring for those who test positive. Del Rio’s regional hospital has fewer than 100 beds, has seen an influx of COVID patients and needs remaining space for locals, he said.

Lozano said even migrant advocates he knows want to see more enforcement in the area.

“It’s a sad day when you see the biggest immigrant advocates in your community saying ‘No more,’” he said.

The first week of this month, about 1,000 migrants were released to the only local migrant day shelter, the Val Verde Border Humanitarian Coalition, which used to aid about 100 migrants a month, said Tiffany Burrow, the director of operations.

The shelter helps migrants arrange transportation — most are headed to larger cities — but options are limited. There are two 20-seat Greyhound buses a day, two daily flights from the local airport, and some charter buses, Burrow said. On Tuesday night, 112 migrants were released by federal immigration officials with nowhere to go, she said. A Honduran family of seven found themselves camped at a local gas station as night fell.

Burrow said the shelter needs help with migrant transportation and COVID testing, not added law enforcement, which the governor has yet to get federal officials to reimburse.

“It’s very disconcerting to have this assistance and know somebody’s paying for this, and it’s us,” she said.

On Thursday, Border Patrol Chief Raul Ortiz — a Del Rio native — visited to try to address local concerns ahead of hunting season, including a rumor that agents had been removed from the field to process migrants. Untrue, Ortiz said.

“That’s a big part of why I’m down here: They have to let the Border Patrol work on solutions,” he said of residents, some of whom grew up with him and said they felt personally betrayed by his lack of support.

Ortiz recalled how in 1997, 18-year-old Esequiel Hernandez Jr. was fatally shot while herding his family’s goats outside of Marfa, another West Texas outpost, by a U.S. Marine assisting the Border Patrol.

“The last thing I want is for us to have another incident like we had in Marfa,” he said as he stood beside a temporary holding area under the Del Rio border bridge where more than 500 migrants had turned themselves in over the weekend.

About 100 migrants remained. The rest had been released, some with ankle monitors, he said. More will be fitted with the devices in coming days, he said, or with government-issued cellphones they will be required to use to check in with immigration authorities. But he said the agency had no plans to start COVID testing migrants.

“I can’t take on another responsibility when my people are tied up here,” Ortiz said.

As he spoke, several Haitian migrants walked up to the bridge from the Rio Grande and turned themselves in.