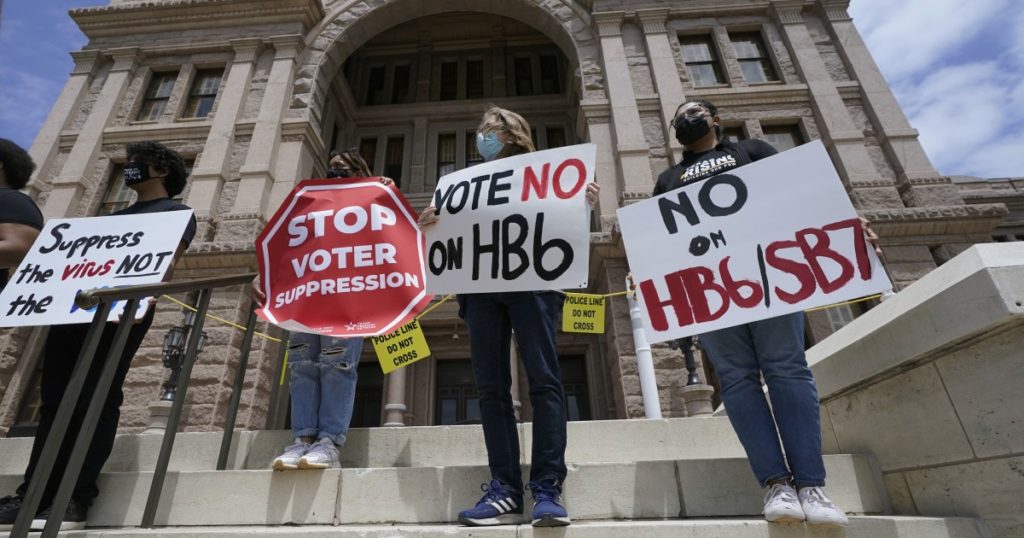 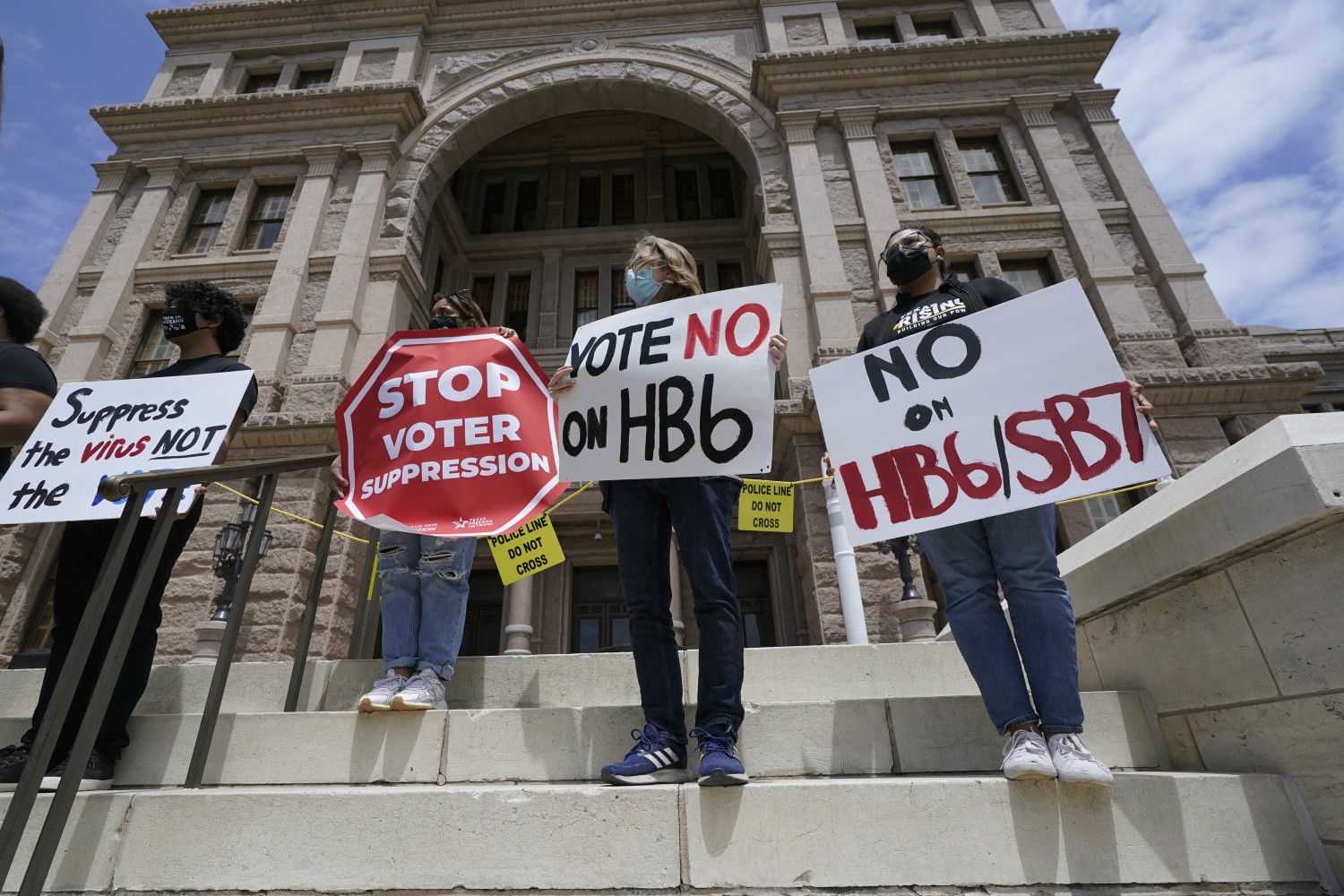 When it comes to voting restriction bills now being considered in the statehouse, however, GOP lawmakers have broadcast a different message to the business community: Back off.

Be it Lt. Gov. Dan Patrick berating American Airlines for opposing the legislation or lawmakers floating proposals to punish companies for speaking out, the effort to tighten Texas’ already strict voting rules has spurred unusual acrimony between the majority party and corporations, their usual allies. Democrats and civil rights advocates, meanwhile, contend businesses have not done enough to flex their considerable influence in the statehouse against the measures.

The corporate response had been somewhat muted as the bills advanced through the statehouse. But this week, coalitions of businesses and executives made an 11th hour push against the legislation. The Texas House is scheduled to take up one version on Thursday.

The bills, HB 6 and SB 7, are among the hundreds of election bills pushed by Republicans nationwide in response to former President Trump’s false allegations of widespread fraud in last year’s presidential contest. The sweeping changes would, among other things, make it a crime for county election officials to proactively send out vote-by-mail applications and make it harder for partisan poll watchers to be removed from observing the election. The latter, opponents say, could lead to disruption or voter intimidation.

Democrats also fear now-discarded provisions, such as banning 24-hour polling sites and allowing poll watchers to film when voters are receiving assistance, could be resurrected in the bill’s final form.

American Airlines and Dell were among the first Texas companies to stake out opposition to the measures, immediately after Georgia passed its own voting restrictions in March.

“When Georgia happened, there was a proliferation of companies trying to jump on the woke bandwagon,” said David Carney, a GOP strategist and advisor to Gov. Greg Abbott.

But, Carney said, Democrats harmed their cause by overstating the impact of the Georgia bill, including President Biden misrepresenting how it affected voting hours. He said Texas Republicans were able to avoid a full-blown business uprising in their state with a simple message: “Read the bill.”

Supporters of the Texas legislation say its requirements to make voting procedures standard across all counties are widely popular and that expanding the power of poll watchers is a step toward transparency.

“When you suggest that we’re trying to suppress the vote, you’re in essence between the lines calling us racist, and that will not stand,” he said.

Later, Republicans introduced three budget amendments that would penalize companies who opposed election bills or threatened adverse actions such as a boycott in response to proposals by state politicians. All were ultimately withdrawn.

In a scathing op-ed last week about the corporate response to Georgia’s voting law, Texas Sen. Ted Cruz fumed that “for too long, woke CEOs have been fair-weather friends of the Republican Party” and vowed to stop taking contributions from their political action committees.

Glenn Hamer, president of the statewide Texas Assn. of Business, was sanguine that such rhetoric would not amount to an about-face on the state’s pro-business policy tilt.

“You’re not going to see anything pass that is punitive to the business community,” said Hamer, whose group has not taken a stance on the voting legislation.

But political observers say the GOP’s stinging language is a sign of a fraying political partnership.

“It’s like a reactive response where [Republicans’] allies have betrayed them and so they’re lashing out against them,” said Kenneth Miller, author of “Texas vs. California: A History of Their Struggle for the Future of America.”

The GOP as a whole has been shifting more toward populism in recent years. Nowhere is that evolution more stark than in the Lone Star State, where the party once staked its brand on the “Texas Miracle” and attributed its low-tax, low-regulation approach for the state’s booming growth.

These days, however, “you would describe the Texas Republican Party as social issues first, businesses second,” Jillson said.

State Rep. Rafael Anchía, a Democrat from Dallas, said that has left businesses “frustrated by all these culture wars that have been waged to appease an increasingly rabid base.”

Meanwhile, the corporate community has been undergoing its own evolution — prodded by consumers and their own workforce — to be more outspoken on social issues, such as gay rights and racial equality.

Tensions spiked in 2017 when social conservatives including Patrick rallied around a “bathroom bill,” which would have required transgender people to use facilities based on their biological sex, not gender identity. A similar measure in North Carolina in 2016 set off a cascade of boycotts among businesses and sports leagues, before the state repealed the law.

Texas companies feared their state would take a similar hit, and worked with then-House Speaker Joe Straus, a Republican, to block the measure, much to the ire of conservative activists.

Now, the top priority for party die-hards are these voting measures, which reinforce Trump’s false narrative of election hijinks.

“If you’re on the wrong side of Donald Trump, you’re going to lose your primary and lose your seat,” said Jason Villalba, who served as a Dallas-area Republican in the state House and was defeated by a conservative in the 2018 primary. “There’s no other explanation why a bill like this gets this far.”

The business world has hardly been uniform in response to the legislation.

“Some companies have been quite outspoken,” said state Rep. Chris Turner, a Democrat from Grand Prairie. “However, I’d like to see more businesses speak out. This affects their employees, affects their customers, affects the social fabric of our state.”

The powerful Greater Houston Partnership, a business association, opted not to take a position on the voting legislation, citing “no consensus” on the board.

That garnered a swift rebuke from Hidalgo and Houston Mayor Sylvester Turner, who said Wednesday they would boycott speeches to the group.

“Voting rights are falling like dominoes in states across the country from Georgia to Arizona to right here in Texas. Yet the largest chamber of commerce is silent,” Hidalgo said, noting the group vowed after the death of George Floyd to stand up for civil rights. “We do not feel confident elevating them after seeing them shrink from the civil rights struggle of our time.”

Some on the partnership’s board organized their own missive, released Tuesday, that pointedly denounced the bills. A separate letter organized by Fair Elections Texas came out the same day, calling on election officials to oppose any changes to law that would hamper voting. Its signatories included a mix of national brands such as Patagonia, Unilever and HP, as well as homegrown entrepreneurs.

“For us, it was personal,” said Todd Coerver, chief executive of P. Terry’s, an Austin-based burger chain. “We represent a workforce of about 925 folks — primarily hourly, minority employees. Often, these folks are the most challenged when it comes to voter access.”

Others point to fears of lost business due to boycotts or companies deciding not to expand in the state. The decision of Major League Baseball to move the All-Star game from Georgia after the state passed voting restrictions looms large in Texas, which is scheduled to host two NCAA Final Four tournaments within the next four years and is in the running for the 2026 FIFA World Cup. A Waco economist estimated fallout to tourism and economic development from the voting bills could cost the state nearly $17 billion and about 150,000 jobs by 2025.

Nathan Ryan, chief executive of the Austin-based business consulting firm Blue Sky Partners, said Republicans, by increasingly focusing on wedge issues to rally their base, risk keeping out the companies they so assiduously pursued.

“It is the height of ‘cancel culture,’” Ryan said, emphasizing air quotes to denote his skepticism over the term that has become a conservative rallying cry, “to produce policy changes that would hurt corporations that are taking a stand.”