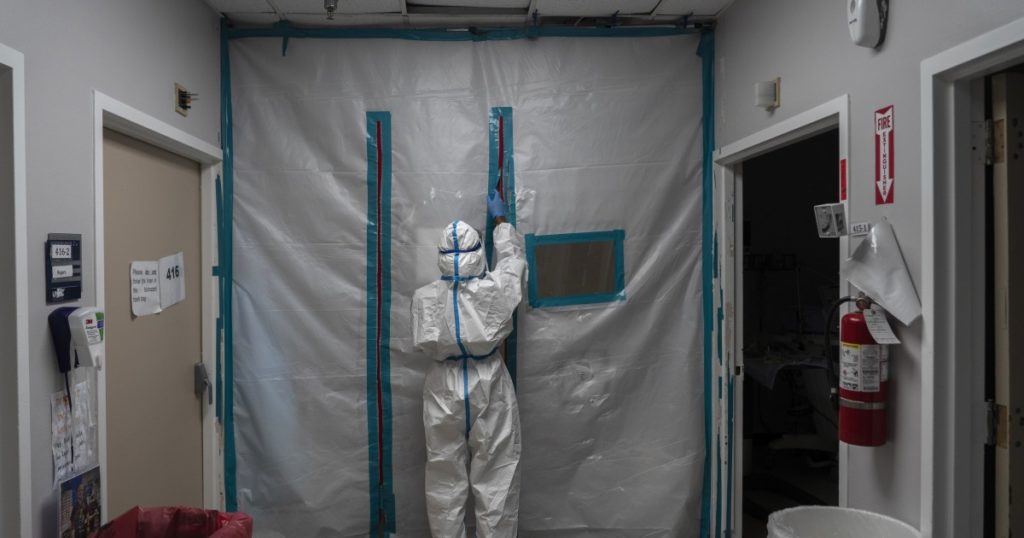 The Texas governor appealed for out-of-state medical help as COVID-19 hospitalizations soared but stopped short of reversing his ban on mask mandates even as leaders of the state’s largest cities and school systems imposed them.

President Biden recently called out Abbott and other Republican governors for blocking efforts to fight the pandemic.

“I say to these governors: Please help. But if you aren’t going to help, at least get out of the way,” Biden said.

But Abbott this week refused to reverse his executive order banning local officials from requiring masks or vaccines even as he faced rebukes from Democrats leading the state’s largest cities and counties.

“Gov. Abbott has been clear that we must rely on personal responsibility, not government mandates,” Renae Eze, the governor’s spokeswoman said in a statement. “Every Texan has a right to choose for themselves and their children whether they will wear masks, open their businesses, or get vaccinated. Vaccines are the most effective defense against contracting Covid and becoming seriously ill, and we continue to urge all eligible Texans to get the vaccine. The Covid vaccine will always remain voluntary and never forced in Texas.”

Officials in San Antonio and Bexar County, Texas, filed a lawsuit Tuesday seeking a temporary restraining order so they can require masks in public schools and unvaccinated students to quarantine if exposed to COVID-19.

“The health of our students, especially those under 12 who are not eligible to be vaccinated, are being put at risk,” Nelson Wolff, Bexar County’s chief executive, said in a statement. “We need to continue to utilize every tool we have to combat the very contagious delta variant.”

In Texas, where about 45% have been vaccinated against the virus, according to the U.S. Centers for Disease Control and Prevention, nearly 9,500 were hospitalized with COVID-19 this week. Hospitalizations surpassed 68,000 nationwide Monday — beyond last summer’s high of about 66,000 — as daily new admissions approached 15,000, straining resources in Texas and neighboring states that have resisted mask mandates and other pandemic public health measures. Florida and Louisiana reported all-time record hospitalizations this week, while Arkansas registered its largest single-day increase in hospitalizations.

Austin Mayor Steve Adler, a Democrat, called the Texas governor’s refusal to respond to the crisis by imposing a statewide mask mandate “unfortunate.”

“We’ve nearly run out of staffed ICU beds,” Adler said. “This is not a political or partisan issue, or it shouldn’t be. But local governments are going to have to do what they can to protect people.”

Texas Democratic city and county leaders were expected to hold a briefing Tuesday afternoon in response to the governor’s refusal to reverse his ban on local mask mandates. Austin and Dallas school districts announced Monday that they would require students and staff to wear masks. The Houston school district — the state’s largest — announced a mask mandate its board is set to consider this week. Dallas County’s chief executive, Clay Jenkins, sued Monday to block Abbott’s mask mandate ban after a fellow member of the county commission refused to wear a mask.

“The enemy is not each other. The enemy is the virus and we must all do all that we can to protect public health,” Jenkins said in a statement. “This is about ensuring there’s adequate medical resources and hospital bed capacity to take care of people with Covid and any other condition that requires medical care or hospitalization. Ultimately, it is about saving lives and saving and protecting children.”

“I’m just trying to protect the people who pick up the trash in this city, people who are police officers, people who are firefighters, EMS workers,” Turner told ABC television. “What would you have me do as the mayor of the city of Houston, just watch people go to the hospital? Watch people die?”

Some Texas doctors also decried the governor’s stance on masks given the state’s unfolding medical crisis.

“The governor’s not helping us here,” said Dr. Nicholas Steinour, an Austin-based emergency physician. “… This is not the time to let down our guard. With the Delta variant, many of our healthcare providers are now getting infected. Nursing staffing is razor thin. EMS diversion is commonplace… I don’t see that getting better in the next couple of weeks — I see it potentially getting worse.”

Most of the COVID-19 patients Steinour sees now are unvaccinated, and he said, “That has definitely made it a little harder as we put our personal health at risk to care for these folks.”

“There’s a sense that now this is a somewhat preventable disease and those that weren’t vaccinated really didn’t do their part in making sure we have the resources to care for others,” he said. “We’re having to constantly remind ourselves that we have a duty and an obligation to care for patients when we’re starting to look at them as, ‘This is your fault.’ ”

Doctors and nurses across Texas said they were running out of staff and space this week, leading to long waits in emergency rooms. An “urgently hiring” health system in Greenville, Texas, Hunt Regional Healthcare, temporarily closed one of its emergency medical centers citing a “critical Covid surge.” Last week, an 11-month-old had to be transferred to a hospital in central Texas after Houston’s Texas Medical Center — which bills itself as the largest medical complex in the world — ran out of beds. Other patients were sent from Texas to Colorado and North Dakota.

Lyndon B. Johnson Hospital in northeast Houston declared a disaster after they were inundated with patients over the weekend, stopped accepting new patients and set up two 2,000-square-foot tents for potential overflow.

Houston Methodist Hospital system was inundated with requests for patient transfers to its 350 intensive care beds and offering bonuses to retain nurses and lure new hires.

“Can you imagine the largest medical complex in the world and patients are being transferred out? People should pay attention,” Dr. Faisal Masud said from the packed intensive care unit he was managing Tuesday. “It’s really becoming life and death for patients… Across the city, there’s a huge list of patients waiting for the emergency room, even if you don’t have COVID.”

Masud confers with hundreds of other critical care doctors across Texas on a WhatsApp group, many scrambling to transfer increasingly young COVID-19 patients to hospitals like his with ECMO machines that take over when their lungs fail, doing more than ventilators but also requiring added staffing. He’s had to turn down many because he doesn’t have enough staff.

Most of the patients he’s seeing are unvaccinated. Some are “family clusters” infected at gatherings. When they ask what they can do, he tells them to get vaccinated, and has staff immediately make arrangements, “otherwise disinformation out there might dissuade them.” So far, he said, none has refused.

But doctors elsewhere in Texas said they have treated COVID-19 patients who refused to get vaccinated afterward, along with their relatives.

“We provide the information, but some patients are still resistant to it,” said Dr. Ralph Riviello, chair of emergency medicine at UT Health San Antonio and University Health San Antonio, where most of those being treated — some repeatedly — were unvaccinated.

“Some say the disease will protect my body and some don’t even believe us when we test them and say they have COVID,” he said. “We’re seeing a lot of suffering and dying, people of all ages.”

But Riviello said the hospital has also seen an increase in those seeking COVID-19 vaccines who had postponed them or were waiting for them to be fully authorized by the Food and Drug Administration.

“Those are the people who we need to get to,” he said, to “try to dispel those vaccine myths.”

In the Austin area, Dr. Nathaniel “Than” Greenwood recently treated a friend’s unvaccinated father in his 60s who caught COVID-19 while traveling with his vaccinated wife on vacation in Missouri.

But that wasn’t enough to persuade Greenwood’s friend, a retired military service member, to get vaccinated.

“I needed to convince him,” he said. “After we spoke about it, he said, ‘You convinced me,’ and he got it.”

Greenwood, chief medical officer for Austin-based Family Hospital Systems, has 15 patients he would normally transfer that he hasn’t been able to move.

“I’ve heard doctors on message boards say this is worse than it’s ever been. Everybody’s full,” he said, and with students returning to schools and universities soon, “The numbers are still going to go up and people are going to suffer.”

Greenwood described himself as “a staunch Republican” frustrated by Texas leaders’ political infighting.

“This should not be a political issue. It’s a public health issue. People need to wear the masks and we need to work together and think of the whole, not just the individual,” he said.