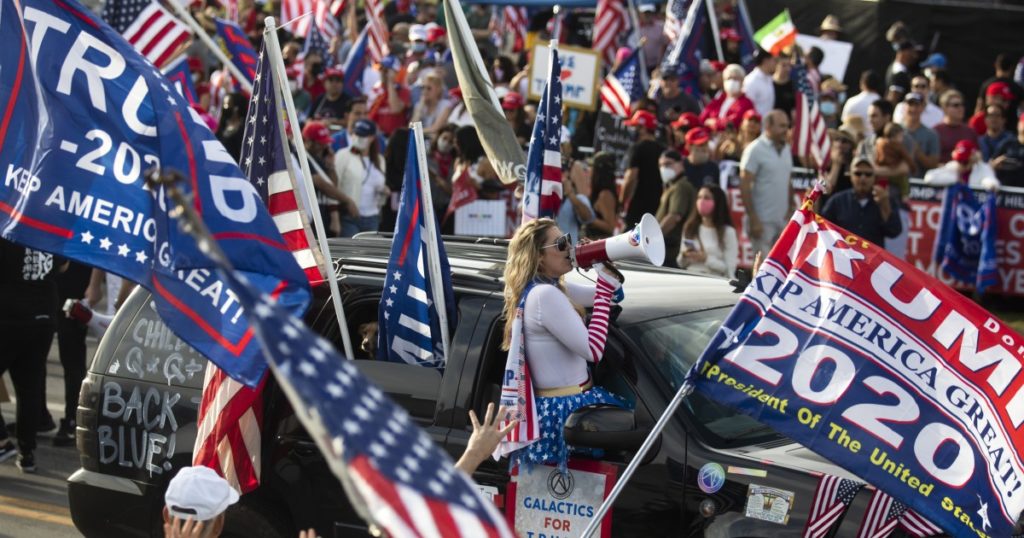 After four years of President Trump, Betsy Smith has no trouble reciting many of his faults.

“He’s inartful. He has a big personality. He uses the wrong words. He makes people angry,” said Smith, who worked for 29 years as a police officer in suburban Chicago before moving to Tucson and launching a police training company.

But despite the many scandals, racist invective, lies and violence that have left Trump with his lowest approval ratings, fewer allies than ever in Congress and a looming Senate trial as the only president to be impeached twice, Smith has no regrets about voting for him.

“Trump has done so much for this country and my family,” said Smith, 61. “I mean, this is the first time in ages we had a president who so unabashedly supported police. For us, that is huge. And that’s just one thing.”

Tens of millions of voters like Smith have remained loyal even after Trump incited the Jan. 6 insurrection at the Capitol that left five people dead and will almost certainly be the defining moment of his presidency. The mob, which included factions of white supremacists, was but a tiny fraction of the 74 million people who cast ballots for Trump in November.

In dozens of interviews, supporters across the country spoke of Trump in reverential terms as the only president in memory who stood for working people rather than the elite.

They said they never doubted his claims that he won the election — a fiction echoed for weeks by right-wing media and many Republican lawmakers. And they pointed to the economy before the COVID-19 pandemic to argue that he deserves a second term, even if that means waiting until the next election.

Boycotting Wednesday’s inauguration of Joe Biden, Trump will depart the White House with about a third of Americans approving of his job performance, according to various polls.

Just under half of Republicans told pollsters from the Pew Research Center that Trump shares no responsibility for the Jan. 6 insurrection, despite his caustic speech on the National Mall immediately before the mob infiltrated the Capitol.

A majority of Republicans — 64% — say Trump won the election, despite no evidence of significant fraud, dozens of unsuccessful court challenges and assurances from state election officials of both major parties.

“I respect and welcome Joe Biden as president,” said Smith, who blames Trump’s extremist supporters for giving people like her a bad name. “But I never wanted it to be this way.”

Trump, she said, made her feel “prouder” to be American.

Some supporters spoke fondly of Trump’s decision to pull out of the Paris climate accord and the Iran nuclear deal, his appointment of three conservatives to the Supreme Court or his staunch backing of Israel. But above all, they talked about the economy before the pandemic.

“We had a great economy, the unemployment rate was low — that was because of President Trump,” said Margaretrose Cox, 52, a speaking coach from Tallahassee, Fla. “He never gets the credit he deserves.

“For the past four years, we have been laughed at, we have been ridiculed, all because we support President Trump,” she said, calling him “a patriot.”

On Jan. 6, Cox joined a peaceful demonstration outside the Florida Capitol inspired by Trump’s false claim that he won the election.

“I think the media has suppressed some information,” she said. “I have the right to my own beliefs, and I want legal votes counted.”

When Cox got home that day, she saw the violence on television.

“It was horrifying what was going on in Washington, D.C.,” she said. “Anyone who breached the Capitol should be arrested.”

Janet Flanigan, a 58-year-old freelance writer in Newnan, Ga., said the vast majority of Trump voters were people like her who reject racism and violence.

She accuses Trump’s opponents of a double standard, arguing that during the racial justice protests over the summer, they were careful to distinguish rioters and vandals from peaceful demonstrators.

As for Trump’s role in the attack on the Capitol, she chooses to focus on the one line in his speech in which he called for a “peaceful” march — and not statements such as, “If you don’t fight like hell, you’re not going to have a country anymore,” or his tweets decrying a “stolen” election that came after the rioters were already rampaging in the building.

“I do not believe at all that President Trump incited a riot,” Flanigan said. “He said, ‘Let’s peacefully march.’ Peacefully march! That is not inciting a riot!

“This whole impeachment is a sham,” she added.

Clampdowns on Trump and his supporters on social media have aggravated her sense that conservative voices are being suppressed, she said. “The Democrats have once again further alienated more than half of the country, and they don’t care,” she said. “They don’t care.”

That sentiment was common at small, largely uneventful rallies that took place over the weekend at various state capitols.

Michelle Brookshire, a mother of four from Commerce, Texas, drove to Austin with her youngest daughter, Shalee, to watch one. Unlike other demonstrators, she was unarmed and did not come with signs or to chant.

“I just feel life has been better the last four years — the economy, it hasn’t been as much of a struggle,” said Brookshire, 51. “Day to day, I’ve felt more secure.”

A medical billing worker, she worries about the economy under Biden.

“Trump is a businessman, not a politician — that’s a good thing,” said Brookshire. “Biden has always been a politician. He never ran a business.”

She is impressed by Trump’s wealth, focusing on his successful ventures rather than the millions he initially received from his father and his multiple bankruptcies. “He has been a success,” she said. “That’s a good thing.”

A conservative Christian, she says she has forgiven the president for his multiple marriages, foul language and temper.

“The Bible, the things we care about — I worry about that, when Trump is gone,” she said. “It’s true that Trump was a bit much sometimes; he could have toned it down. But he helped make life better for us.”

John Hess, who spent 40 years with the Coast Guard before retiring and moving to Washington state, still lives in Trump’s world and has every intention of remaining there.

Over the weekend, he held a one-man pro-Trump event at the state Capitol in Olympia, flying a yellow Gadsden flag from his Ford pickup. He parked on a side street and got out of his truck, wearing a “Make America Great Again” hat.

Hess, 66, said he plans to continue protesting Biden after Wednesday: “I’m going to do this once a week until I get old and die or until Trump gets back in office.

“You can’t silence 74 million people. I don’t think we want to start off a civil war, but are we willing to say that our country is no longer ruled by the people but by the people who stole the election?

“I think we’re about five years from a Lexington or Concord,” he added, referring to the first battles of the Revolutionary War.

Hess voted for Trump twice and liked him for building the partial border wall, withdrawing troops from abroad and reducing government regulations.

He also preferred Trump’s approach to the pandemic over Biden’s public-health-oriented plans.

“People don’t realize that life is risky,” he said of the coronavirus, whose danger he sees as exaggerated, despite scientific evidence to the contrary and a U.S. death toll that has surpassed 400,000.

“People have forgotten that this is a Christian nation, and we believe in God,” he said.

Many of Trump’s supporters want him to run again. Trump hasn’t indicated his plans; he is eligible to run unless he is convicted during a Senate impeachment trial and then barred from holding office again.

The impeachment and trial are “just a way to keep him from running for president again,” said Jeff Koch, a 69-year-old retired sign painter from Federal Way, Wash., who attended a rally of two people over the weekend in Olympia.

He suggested that impeachment was revenge for Trump’s attacks on “the swamp” — as the president likes to call Washington lobbyists and other insiders, even though they have been at least as present in his administration as in any other.

Koch long ago gave up on his local newspaper and most mainstream media. He liked that the president could until recently share news himself on his Twitter account. Twitter’s decision to ban Trump and moves by Facebook and other social media companies to take down materials supporting false theories of election fraud only fortify Koch’s belief that the president’s supporters are being muzzled.

“Now people can’t speak for Trump in a meaningful way, and he can’t defend himself,” he said, though there are millions of users of social media who have “MAGA” as part of their bios, and Trump has ample ways to broadcast his views.

Kaleem reported from Tucson, Lee from Tallahassee, Read from Olympia, Jarvie from Atlanta and McDonnell from Austin.