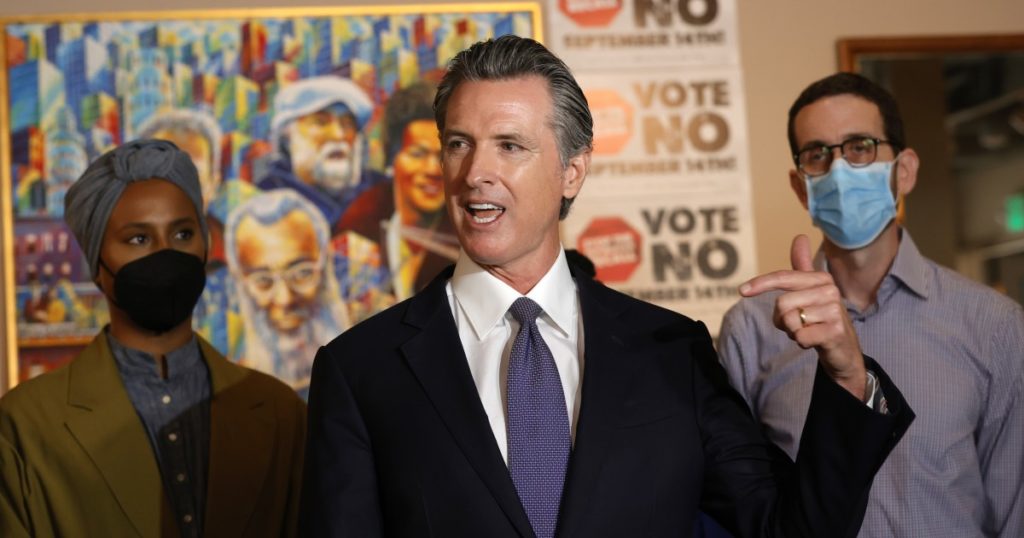 Gov. Gavin Newsom and his allies boosted the Democrat’s chances of beating the recall attempt by significantly outspending his opponents in August, putting more than $36 million into efforts that included TV advertising and social media, phone-banking, door-knocking and texting.

The five top Republicans running to replace Newsom and pro-recall committees combined spent less than a third as much over the same period, according to campaign finance disclosures filed Thursday with the secretary of state’s office.

Newsom, who enjoys an overwhelming fundraising advantage over his opponents, used that edge to stoke Democratic enthusiasm after a series of polls suggested his fellow partisans were less engaged than Republicans and others supporting the recall. More recently, polls show the governor has as much as a double-digit lead. And anti-recall forces have raised $72.4 million, more than double that of candidates and political committees backing the recall.

“Democrats were rightly concerned that not enough Democratic voters were paying attention or caring about the recall. And as with most statewide elections, money does play a huge role, especially when it comes to television advertising,” said veteran GOP strategist Beth Miller, who worked for former Gov. Pete Wilson and unsuccessful 2010 Republican Senate nominee Carly Fiorina.

“You have to take a step back and pause and ask, in such a deeply blue state like California, who would have thought it was going to take this kind of money to move the needle and keep Newsom in office,” added Miller, who believes the governor will survive the recall.

Recall backers say the financial difference doesn’t matter because the greater passion is on their side.

“We had no money and we still got it on the ballot, and some polling showed us even,” said Anne Hyde Dunsmore, campaign manager for Rescue California, one of the main recall groups. She said that even if the effort is unsuccessful, it has many silver linings.

“We caused [Newsom] to spend, we caused the Democratic Governors’ Assn. to spend. We’re draining resources for 2022, which is promising to be a miserable [election] year for the party that holds the White House,” Dunsmore said.

But for now, at least, Newsom’s massive spending appears to have paid off. The election is on Sept. 14, though all of California’s 22 million registered voters were sent mail-in ballots in August because of the pandemic.

In late July, the polling was near even. But an average of surveys in August show those opposed to recalling Newsom with a lead of more than eight points, according to Real Clear Politics and 538, two poll aggregators. A poll released Thursday by the nonpartisan Public Policy Institute of California had Newsom with a 19-point lead.

Committees that support or oppose the recall can solicit unlimited sums, while candidates are constrained by state campaign finance rules to raising $32,400 per donor.

The primary anti-recall committee has raised more than $66 million this year, and other groups that back Newsom brought in an additional $6.4 million through Aug. 28. In contrast, pro-recall groups have raised nearly $10 million, while the major GOP candidates have raised $26.2 million total.

Between Aug. 1 and Aug. 28, the main committee opposed to Newsom’s recall spent $16.1 million on television and radio ads during the Olympics and on shows such as “Bachelor in Paradise,” and the local morning news. Ads were also aired on “Despierta America,” a Spanish-language morning news and lifestyle show on Univision, to reach Latino voters, a group that has been lagging in returning mail ballots.

The ads in support of Newsom focus less on his record than on Democrats’ strategy of depicting the recall as an attempt by the GOP to do what it has failed to do in regular elections for more than a decade — win statewide office. In one spot, Sen. Bernie Sanders called it “a bold-faced Republican power grab.” The governor and his supporters are also warning that Californians will die if he is replaced by a Trump-supporting GOP rival because they all favor loosening COVID restrictions.

The main pro-Newsom group also financed an effort that it is describing as the largest voter mobilization in state history.

“We’ve got the biggest, most aggressive turnout operation and mobilization effort in state history,” said Nathan Click, spokesman for the grouP, which has 900 paid staff and tens of thousands of volunteers — largely through their allies in labor. The committee has also partnered with 90 organizations around the state, such as Voto Latino, giving it $1 million for an effort aimed at young Latinos.

Much of the main anti-recall committee’s focus in the closing days of the campaign is on Latino and young voters who historically are more difficult to prod to the polls during non-presidential elections. At least $10 million has been earmarked to turn out communities of color around the state, Click said.

“We are focused specifically on these voters that are late voters and voters who don’t often vote when it’s not a presidential year,” Click said. “We’re investing deep in programs that give these folks the information they need to turn out.”

The five top Republicans vying to replace Newsom have spent a little over $10 million combined in August, while anti-recall committees spent an additional $1.1 million.

The election is 10 days away, and so far more than 5 million ballots have been returned, with Democrats outnumbering Republicans by more than 2 to 1. (Republicans now tend to vote on election day because of former President Trump’s false claims about fraud in mail voting, so these early numbers are not predictive; roughly 17 million ballots are outstanding.) Centers for early in-person voting in Los Angeles County will open Saturday.

The infusion of money in August, at a level rarely seen in California politics, has made the difference for Newsom, said Sherry Bebitch Jeffe, a professor of public policy communication at USC.

“They finally woke up to understand how real this was,” she said, adding that she believes the entrance of conservative talk-radio host Larry Elder prompted the spending spree. “Larry Elder joined the fray and they were worried.”

Elder, the front-runner among the candidates who hope to replace Newsom, upended the race when he entered it in mid-July. He has raised more than $13 million, the most among GOP candidates. He spent more than $4.5 million on television and more than $520,000 on online campaigning in August. A total of 46 replacement candidates are on the ballot, though one dropped out after suffering a heart attack.

Elder said that his prolific fundraising in an abbreviated time period and his support from small-dollar donors showed that Californians are hungry for change.

With nearly $8.6 million in donations, businessman John Cox was the next biggest fundraiser because the multimillionaire has largely self-funded his campaign. He spent $2 million in August, including on a television ad featuring a 1,000-pound Kodiak bear.

Former San Diego Mayor Kevin Faulconer spent $1.1 million and Assemblyman Kevin Kiley $630,000 in August; they and Cox remain mired in the single digits in the polls. Olympian turned reality TV star Caitlyn Jenner, who made a splash when she entered the race in the spring, came in at 1% in the PPIC poll; she reported spending $93,422 in August, mostly on campaign consultants.