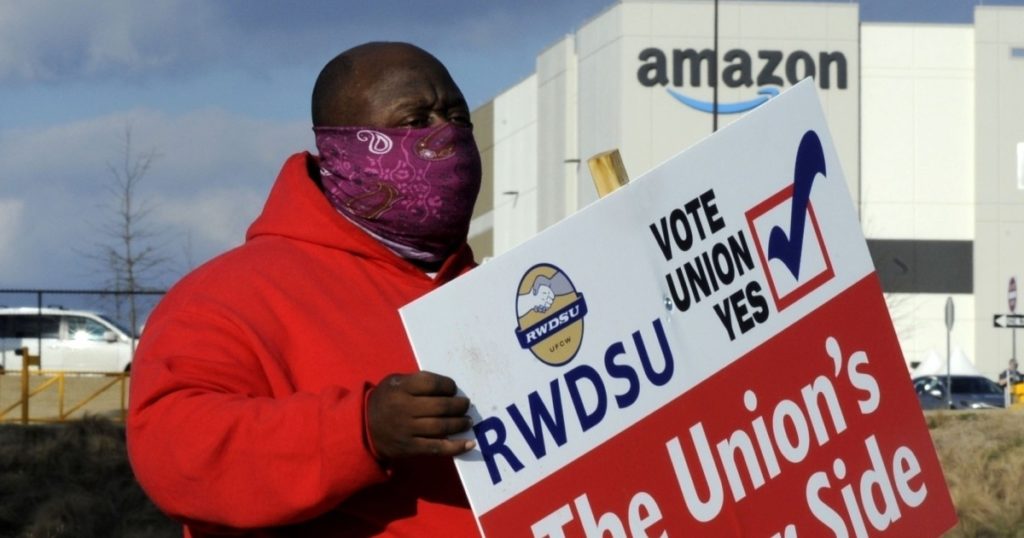 One of the nation’s largest unions, the International Brotherhood of Teamsters, announced it will mount a nationwide effort to organize Amazon’s delivery and warehouse workers, declaring that the multibillion-dollar behemoth is an “existential threat” to workers across the logistics industry.

In a resolution presented Tuesday at its 30th international convention, the 1.4-million-member union proposed to fully fund and “supply all the resources necessary” to help Amazon workers organize.

The announcement, coinciding with Amazon’s annual sales bonanza Prime Day, comes in the wake of a stunning defeat for the labor movement and its progressive allies.

In April, Amazon workers at a giant Bessemer, Ala., warehouse voted overwhelmingly against representation by the Retail, Wholesale and Department Store Union after a fierce anti-union campaign by the company.

The Teamsters’ 500 locals, meeting online, are expected to approve the initiative Thursday.

Amazon did not respond to a request for comment.

With 1 million workers, the Seattle e-commerce giant is on pace to be the nation’s biggest company, capturing market share from UPS, the Teamster’s largest unit, and other logistics companies. It is already one of Southern California’s largest employers, feeding goods from the sprawling ports of Los Angeles and Long Beach to destinations across the U.S.

At least at first, the Teamsters will reportedly bypass the standard approach to union organizing through facility-by-facility elections under the National Labor Relations Board, which has been widely criticized as favoring employers.

“We chose not to go down the path of an NLRB election for the reasons that were validated in the Bessemer union election,” National Teamsters Director for Amazon Randy Korgan told Vice this week. “The list is very long in how workers can seek justice on the job. The NLRB is not the only way.”

Instead, the Teamsters are mobilizing their members at UPS and other companies to form alliances with community groups and help train Amazon workers to advocate for their workplace rights — an effort which has already been underway in Southern California’s Inland Empire, where Amazon is the largest employer, and other regions.

In San Bernardino, Teamsters Local 1932 has worked for several years with environmental groups and the Warehouse Worker Resource Center, a nonprofit in Ontario, in an effort to force a $200-million Amazon airport cargo hub to boost wages and reduce air pollution from trucks in the smog-plagued region.

Unionizing any part of Amazon’s exploding workforce amounts to a brutal challenge. The company’s giant workforce has a high worker turnover rate, which makes organizing difficult.

The Teamsters, which lost 9% of its membership during the COVID-19 pandemic as well as 65,000 members in 2019, have mounted few organizing campaigns at Amazon facilities.

Despite a decade-plus campaign aimed at truckers serving the Los Angeles and Long Beach port complex, the Teamsters have made little progress in unionizing companies that rely on independent contractors.

The stakes are becoming even higher. Amazon’s global workforce shot up by more than 50% last year as the COVID-19 pandemic drove demand for online shopping.

Last year, the company tripled its suburban logistics nodes in Southern California from nine to 32, according to a survey by the Southern California News Group, adding new facilities in such places as Mission Viejo, Palmdale, Playa Vista and Upland, and quadrupling its industrial footprint.

“Amazon is changing the nature of work in our country and touches many core Teamster industries and employers such as UPS, parcel delivery, freight, airline, food distribution and motion picture, and presents an existential threat to the standards we have set in these industries,” the Teamsters resolution said.