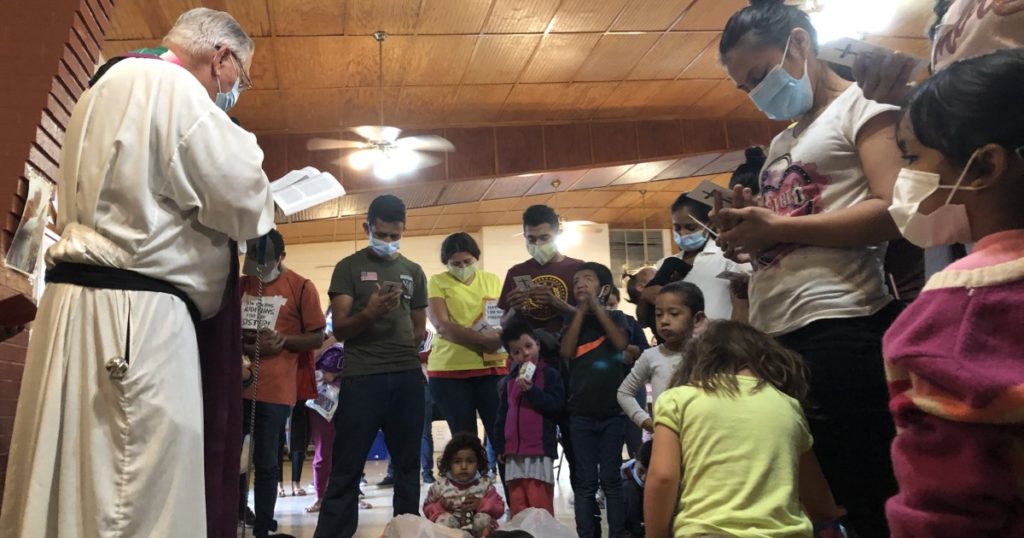 The priest arrived to bless about 90 Central American families Tuesday at an old parish hall that had been converted into a shelter to absorb the rising number of migrants and unaccompanied children streaming into Texas’ Rio Grande Valley.

The Rev. Roy Snipes, a native Texan who preaches in a straw cowboy hat, stood in front of a portrait of Our Lady of Guadalupe. He prayed in Spanish over the families, sprinkling them with holy water drawn from the Rio Grande, the same river many had crossed just days before.

“You made it here, and here you are,” said Snipes. The parents — some holding infants — applauded.

Migrant families and unaccompanied children are overwhelming U.S. Customs and Border Protection holding areas and federal youth shelters even as the facilities are being expanded. The surge is happening as families flee gang violence, unstable governments, poverty and hurricane damage at a time many believe the Biden administration will be more welcoming than the former Trump White House.

“We are on pace to encounter more individuals on the southwest border than we have in the last 20 years,” Homeland Security Secretary Alejandro N. Mayorkas said Tuesday. “We are securing our border, executing the Centers for Disease Control and Prevention’s public health authority to safeguard the American public and the migrants themselves.”

The number of migrant families has doubled this year but remains below previous spikes, including the most recent influx in 2019. But the flow of youths arriving without adults has increased to near-record levels, to 9,457 last month from 5,858 in January — more than the number who arrived in the same period in 2019. The influx is straining U.S. immigration resources and intensifying pressure on the Biden administration to stem an emerging crisis Republicans say it should have been prepared to handle.

Federal officials have reopened a migrant youth shelter for 700 in central Texas and created a temporary shelter for another 700 at a former oil camp in west Texas. The Dallas convention center will house up to 3,000 youths. Some shelters have faced criticism in the past amid allegations of mistreatment, and migrant advocates oppose reopening them.

The Border Patrol’s main holding center for migrant families in the Rio Grande Valley is closed for renovation. More than 1,000 migrants were sent to a nearby tent facility this week, some sleeping on the floor because there were not enough mats, according to nonprofit lawyers who interviewed youths held there.

Young migrants have told the lawyers they had been held at the facility for a week or longer, despite the federal government’s three-day limit for detaining children. Many said they had not been allowed to phone their parents or other relatives.

Some parents have been unable to locate children for more than a week after they arrived in the U.S., said Dr. Amy Cohen, co-founder and executive director of Every Last One, a Los Angeles-based nonprofit that works to reunite separated migrant families.

“We are forcing the hand of these parents who are in a situation of tremendous danger in Mexico, where they are seeing or experiencing being kidnapped again and again,” Cohen said. “I’ve had parents who were in the situation where they were afraid they would be murdered and their child left alone.”

Two Honduran children, ages 11 and 9, were separated from their uncle recently. The man was returned to the Mexican border city of Miguel Aleman, where he was kidnapped and freed only after his relatives in the U.S. paid $5,000 ransom, Cohen said. Relatives in Texas are still trying to find out where federal officials are holding the children.

By law, children are supposed to be transferred by Border Patrol to Health and Human Services shelters within 72 hours, but there have been delays because of pandemic restrictions. Some children have also been transferred out of state to federal foster care, Cohen said.

Republican lawmakers have raised alarm about the migrant surge.

“This crisis is created by the presidential policies of this new administration. There’s no other way to claim it than a Biden border crisis,” House Minority Leader Kevin McCarthy (R-Bakersfield) said Monday after touring a Border Patrol migrant processing center in El Paso with a GOP congressional delegation.

The Federal Emergency Management Agency has been called into Texas to help, but it will not be able to leverage disaster funding without approval of Republican Gov. Greg Abbott. The governor has rejected a proposal for FEMA to test migrants for the coronavirus. He has also increased law enforcement at the border in response to fears of migrants spreading the virus.

Abbott announced Tuesday that he plans to hold a briefing with state officials at the Dallas convention center Wednesday, “to discuss the unaccompanied minor crisis.”

“Texas is putting President Biden on notice that his policies are risking the health and safety of Texans and putting children at risk,” the governor said in a statement.

Congressional Democrats have insisted that the region is not in crisis: “My community becomes a prop for them so that they can continue to fuel the divisions in our country,” Rep. Veronica Escobar (D-Texas) said during a Monday briefing, “… to get the American public to believe that the southern border is a place to be feared.”

The Biden administration has so far upheld former President Trump’s pandemic policy of returning most asylum-seeking migrants to Mexico. But in recent months, the Mexican state of Tamaulipas opposite Texas’ Rio Grande Valley refused to accept the return of migrant families with children under age 7. Some have been released locally. Others have been held at two family detention centers in central Texas or flown to El Paso to be released or sent back to Mexico.

“There’s no crisis on the streets of El Paso,” said Sami DiPasquale, executive director of Abara, a nonprofit that works with migrant shelters there and across the border in Ciudad Juarez. “There’s definitely challenges to dealing with it, but the crisis is in countries people are fleeing from.”

Sister Norma Pimentel, who runs a center that receives recently released migrant families in the Rio Grande Valley, agreed. Inside the Catholic Charities center in downtown McAllen on Monday, hundreds of families lined up to claim toiletries, took showers, ate meals and rested on pallets spread on the concrete floor.

“I think if we work together, we can do this respectfully, establish a narrative that there is a way to enter the United States in a safe and orderly way,” Pimentel said. “We can control this immigration process in the right way.”

Before migration spiked last month, Pimentel and other local leaders contacted Snipes, who agreed to take in migrant families at Our Lady of Guadalupe. The reverend had been hosting weekly Masses in support of migrants and in opposition to Trump’s border wall.

Outside the church on Tuesday, children squealed and darted across a playground. Parents gathered donated clothes into trash bags as they awaited vans that would take them to the nearby airport for flights to join relatives in Maryland, North Carolina and Pennsylvania.

Honduran migrant Fabiola Romero, 28, said her brother had bought tickets for her and her two children to join him in Wilmington, N.C. Romero said smugglers led her across the Rio Grande on March 3 on a raft with her 3-month-old son, Hemsford, and 6 year-old daughter, Victoria. They turned themselves in to Border Patrol. They were held at the temporary tent facility, tested negative for the coronavirus and released Monday.

An elementary school teacher and single mother, Romero said she migrated for economic reasons. She earned about $250 a month teaching in her rural town, not enough to support her family. She decided to leave for the Mexican border after she heard that migrants with children under age 7 would be allowed into the U.S. She plans to work in the U.S. to repay her brother for her trip to the border and to support her father and younger sister in Honduras.

“We came for our children, for their future,” she said, cradling her sleeping baby.

While waiting to cross the river in the border city of Reynosa, Romero said she met a migrant mother who had sent her children — ages 3 and 6 — across a border bridge alone after they were returned to Mexico by U.S. Border Patrol.

“If you send them alone, they can cross,” Romero said of migrant children. “The people know that. It’s their only opportunity.”

About 9:30 a.m., two vans arrived and Romero lined up to board with the rest of the families. Snipes followed them outside, sprinkling holy water on them as they boarded.

“Go with God,” the priest said in Spanish. “Have a good trip.”

At noon, volunteers from a Catholic Charities center in nearby McAllen would call to tell Snipes how many migrants to expect Tuesday night. The respite center has been receiving more than 800 migrant families daily. They send about 100 to the church.

Up to 25 volunteers staff the makeshift shelter, cooking meals and organizing donated supplies. Some are vaccinated against COVID-19 but others, like Albert Solis, the shelter’s coordinator, are still awaiting vaccination. They bought rapid COVID-19 tests in case migrants show up with symptoms, he said, but so far all have tested negative before arriving.

“Every day has gotten easier, especially with the help of the community,” Solis said as he readied the shelter for more arrivals Tuesday afternoon. “We don’t know how long it’s going to be before it calms down.”

After the vans left, Snipes returned to his office to await word of how many more would arrive. He planned to bless them.