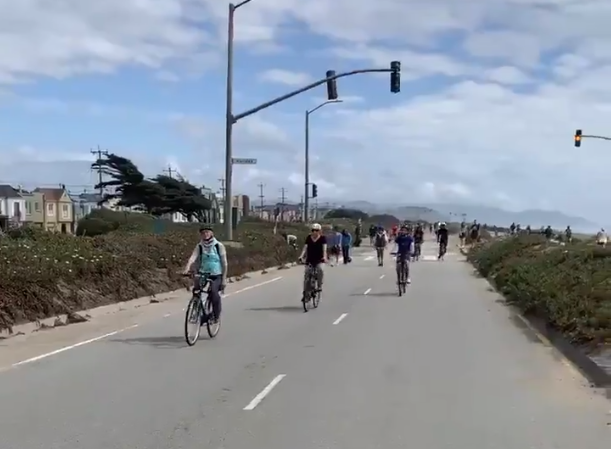 The Great Highway will be re-opened to motorists on August 16th, dashing the hopes of safe-streets advocates to keep San Francisco’s iconic beachfront street safe and available for cyclists, pedestrians, and children.

From a release from the mayor’s office, issued Thursday afternoon:

Today Mayor London N. Breed and Supervisor Gordon Mar with support from Supervisors Connie Chan and Myrna Melgar, announced that starting Monday, August 16th, the Great Highway will have an adjusted operational plan tied to the pandemic emergency closure. The Great Highway between Lincoln Way and Sloat Blvd will be open for weekends and holidays for pedestrian and bicycle use only, and open to car traffic on weekdays. The timing of this new operational plan is to combine with the first day of school to support students and families getting to and from school, as well as people returning to getting to and from work during the week.

Starting Monday, August 16th, the Great Highway will be closed to car traffic and open to pedestrians and bicycles only from Fridays at 12:00 pm until Monday at 6:00 am, and will be open to vehicular traffic from Mondays at 6:00 am to Fridays at 12:00 pm. On holidays, the Great Highway will also be closed to vehicular traffic. This modification phase to the emergency response will be in place until the Board of Supervisors considers legislation to establish a one- or two-year pilot in this or in another configuration that would extend beyond the pandemic emergency closure.

“The creation of an oceanfront promenade on the Great Highway during the pandemic has been transformational, with incredible benefits and real challenges,” said Supervisor Mar, as quoted in the mayoral statement. “It’ll take new and robust investments in westside transit and transportation to truly address the traffic impacts, and it’s unreasonable to continue a 24/7 closure without them.”

😫THEY CAN’T TAKE AWAY THE GREAT WALKWAY!😫

Take one minute right now to tell this to Supervisor Mar.

Mar is about to announce that traffic will return to the Great Highway on weekdays by Aug. 16.

Meanwhile, rumors of a backroom deal to blow up the Great Walkway were already circulating and advocates had already planned an emergency press conference via Zoom for Thursday at 3 p.m.

The press conference agenda was as follows:

As previously reported, the “Great Highway” was opened to cyclists, pedestrians, and children during the COVID pandemic. Since then, motoring interests, not satisfied with having access to every other street in San Francisco, have fought to return one of San Francisco’s most beautiful areas to the realm of noise, pollution, and danger from speeding cars.