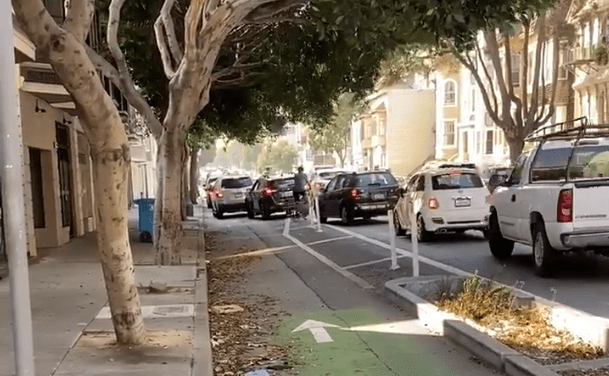 A drunk-driving suspect crashed his car into a cyclist on the Wiggle on Wednesday near the intersection of Fell and Divisadero, a notorious spot where the Wiggle bike lane’s curb drops out to allow motorists to enter an ARCO gas station. The driver also hit two other cars.

“Three individuals sustained injuries. Thankfully, all are stable and injuries are reportedly minor. We appreciate the updates from SFPD and SFFD regarding the incident,” wrote Supervisor Dean Preston, who represents the district, in an email to Streetsblog. “This block is well known to cyclists and pedestrians as being extremely unsafe, and it is one of our top Vision Zero priorities in District 5 to make this block safer. We have reached out to MTA about possible short-term and long-term solutions and will provide updates on our progress.”

Any cyclist who uses the Wiggle has had a close call at that intersection, where cars regularly back up from the gas pumps and block the bike lane. Worse yet, they often jink left across the bike lane into the gas station, putting cyclists in peril.

Supervisor Preston recently checked it out himself:

As wiggle riders know, this block (Fell between Scott/Divis) is a mess. Here’s a recent video I took showing how cyclists are forced out of bike lanes into traffic as cars line up to turn left into the gas station. Looking forward to working with ⁦@sfmta_muni⁩ to solve this pic.twitter.com/d3qQRq4fYp

“It is actually worse when there is less car traffic and motorists are traveling at 30 mph+ trying to beat the light. We need cement protection. Remove the ARCO entrance/exit from Fell,” wrote People Protected Bike Lane advocate Matt Brezina.

It’s infuriating how long this known hazard has been tolerated. In Streetsblog’s coverage from a decade ago, then-editor Bryan Goebel quoted Josh Hart, a former SFBC staffer:

“It’s just madness. Absolute madness. And day after day you have the police department ignoring the enforcement of a law that says you are not supposed to block any bike lanes in San Francisco,” said Hart. “You have people waiting to get into the ARCO gas station every day and you just sit there and you watch this unfold and it’s like this recurring nightmare.”

Ten years, countless crashes later, the problem remains. “This has been a harrowing gap in our protected bike lane network for too long,” wrote the San Francisco Bicycle Coalition in a statement, today.

As commenters on social media put it: the entrance on Fell to the ARCO station needs closed and the curb protection extended to the corner. There’s still an entrance on Divisadero for motorists to enter and exit the gas station. So basically this is a choice between making motorists who want gas go around the block, or continuing to clobber and risk killing cyclists on a regular basis. Anybody who has trouble making that policy decision is morally confused or psychopathic.

Streetsblog has reached out to SFMTA for a reaction and will update this post.