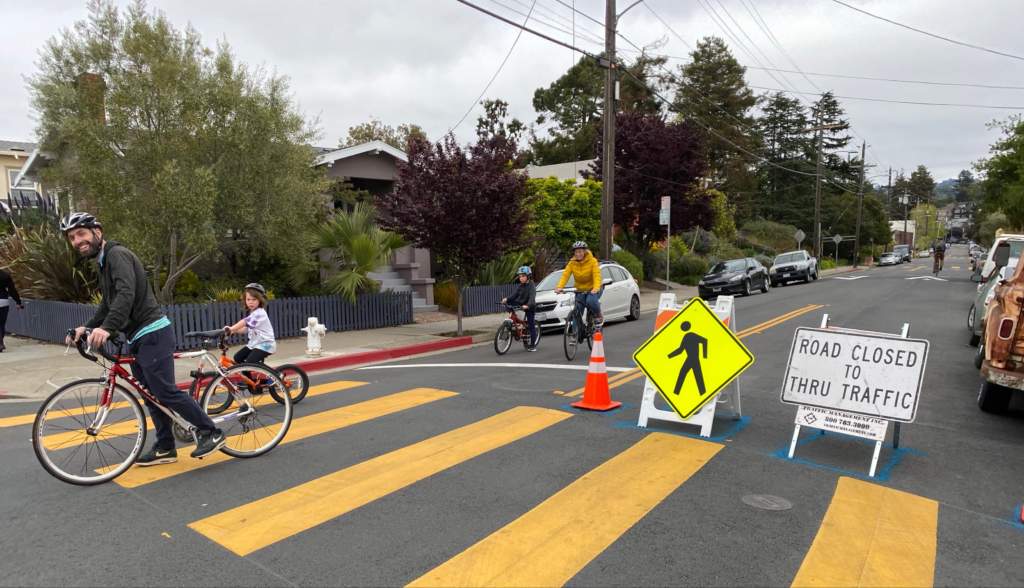 Slow Streets, emergency transit lanes, al fresco dining–the COVID crisis, despite all its horrors, ushered in an unparalleled period of experimentation, fast installations, and new uses for streets. But how much of it will last in the years to come, once the virus is truly defeated? “Will it outlast the pandemic, or will it go the way of the emergency order?” asked SPUR’s Nick Josefowitz, during a talk Wednesday with the heads of Oakland, San Francisco, and San Jose’s transportation departments.

“I think it will be halfway. Once the emergency order comes to an end, bureaucratic requirements will kick back in,” responded SFMTA’s Jeffrey Tumlin. But it created “…an appetite to have government be more efficient.”

And that appetite was born from the rate of implementation of “quick build” projects that got installed in all three cities over the last year and a half. “For Oakland, we’re quite proud that we kicked off the national movement towards slow streets,” said Ryan Russo, head of that city’s transportation department. He added that government officials, under normal circumstances, are risk averse and would never have sanctioned a program that allowed kids on scooters and people walking dogs to share the same “road bed as recycling trucks and Amazon delivery vans.” But the COVID crisis made it so providing open space was a health imperative. “We knew we needed social distancing.”

The imperative may have created a new form of “public outreach.” Rather than holding public meetings for months or years before a project goes in, the pandemic opened the opportunity to get pilots in fast–pilots, said the panelists, that can then be used to modify designs before they become permanent. “They’re easily reversible,” said Tumlin. “Use the pilot itself as community engagement.”

That also means, explained Tumlin, that people who aren’t the types who normally to go to government meetings get a chance to comment and really see what’s planned. But the push-back continues. “It’s largely from a more privileged set of voices who are used to dominating things and using procedure to stop things,” he added. “The establishment is getting frustrated. Their ability to slow progress is being taken away from them.”

“Process is used to gunk up the machinery,” agreed Ryan. He also said the key to creating a new process, based on pilots, is to be able to pivot and change and be humble enough to recognize mistakes. “We realized, frankly, that slow streets were serving wealthy, white communities more.” In response, they applied the same kind of quick-build traffic calming measures to help people of lesser means. “We pivoted slow streets to essential services and used that same tool box near grocery stores and COVID testing sites, so those most impacted were helped rather than just helping people who can work at home and just needed a place to go for a walk.”

“We’re doing aggressive changes on roads and intersections,” said John Ristow of San Jose’s DOT. He added that the city’s wide streets leave ample room for bike lanes, dining lanes, and many other uses aside from just motor-vehicles. “Now they’re going to be used by many more types of users—that’s just the way it is and everyone has to start thinking of it differently.”

But, as seen with the Great Walkway and J.F.K. Drive, the pushback is very real. And it’ll be a real question about how much will get torn back out.

Russo, however, seemed to think if the department responds to the immediate needs of people–block by block–much of what his city has accomplished will stay in place and, in fact, can be expanded. “We have to stay focused on crisis-type problems, not ‘what’s our mode split to have a sustainable transportation system,’” he said, adding that just like people are concerned about gun violence and crime, they are concerned about getting terrorized by dangerous drivers and the immediate risk they present. “People want traffic calming to prevent the reckless driving on their blocks. So yes we can add speed bumps and more traffic circles to address the uptick in traffic collisions.”

And if that accelerated, block-by-block approach, using quick-build pilots continues, the result will eventually be a much safer city overall.

“We have a big clamoring for safety,” said Ristow. “I think that we’re getting lots of interest and support for quick build projects,” that address that desire, he explained. He added that San Jose leaders are strongly behind expanding the network of protected bike lanes for that reason. “Quick builds pop up in a day. Motorists aren’t used to it, so we get push back … but we’re doing aggressive changes on roads and intersections.”

Tumlin stressed that there’s still a huge amount of work to do in outreach if the cities want to save the gains made during the pandemic. “We’ve designed the San Francisco Bay Area to force people to drive… and for essential workers living in low density, auto-centric locations we’ve denied them other modes.” As a result, there will always be push back, because for many reducing the width of a road to add a protected bike lane or widen a sidewalk is “a direct affront to their personal liberty–or their basic mobility. The ability to walk or bike and take transit has largely become a position of privilege.”

But, he warns, it’s also a trap–because if agencies don’t figure out a way to educate and show compassion for people in that situation, today’s car-centric streets and communities will be forever plagued by pollution and gridlock. City transportation officials have to find a way to convince people there can be better mobility if streets really do facilitate walking, biking, and transit over perpetuating a total dependence on automobiles.

Quick build, pilot projects, developed during the pandemic, the panelists agree, may point the way for breaking out of that trap. “We have to understand how this impacts people who aren’t always open to change. We have to engage with people who are typically silent,” said Tumlin.