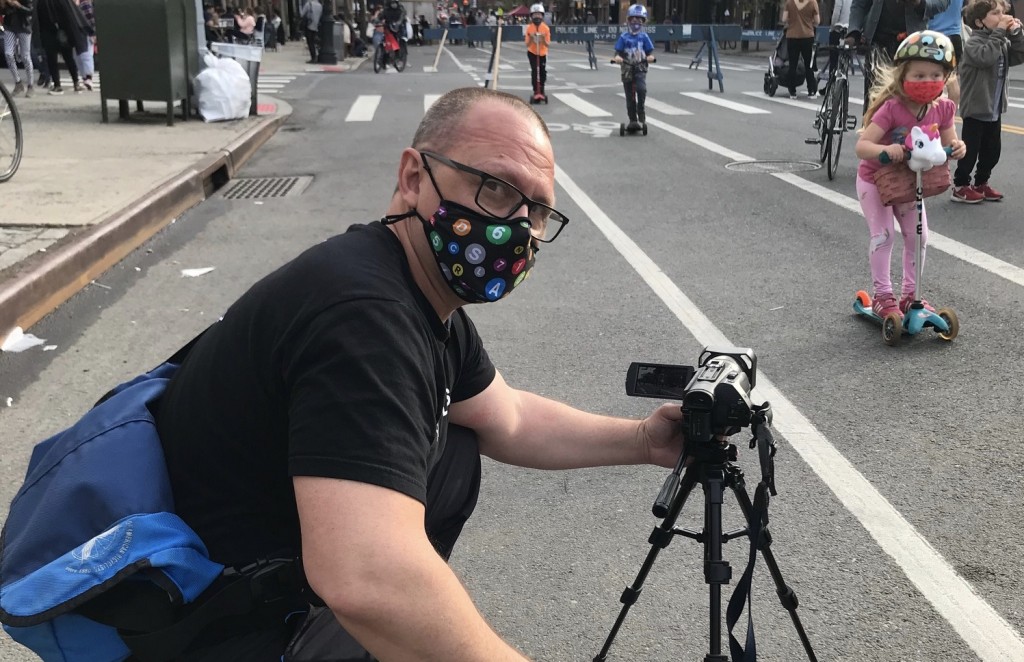 A few weeks ago, I published two eye-opening videos from a pair of Manhattan avenues with protected bike lanes (one at the First Avenue entrance to the Queensboro Bridge bike and pedestrian path, the other at multiple intersections on Second Avenue). The purpose was to count the number of cars and bikes — and show how much of a bike boom the city is already experiencing.

Here’s the one from First Avenue:

After the videos were posted, many people have tweeted, emailed and asked, “How can I do that, too?” not only here in New York City, but also all over the country.

I thought the exchange below was funny:

Luckily it’s really pretty simple if you have something to record with, a tripod and a few hours of time. The first thing you’ll want to do is identify a place thick with bike use and pick a good time to tape. It’s not shocking to predict rush hour weekdays are good. It is important to pick a spot where you can capture all you want (if you want cars, buses, pedestrians too, etc. you need to get as much of roadway as you can). Also: if comfort is important to you, bring a chair. I sat on sidewalks, which wasn’t exactly delightful as I was still recuperating from a torn meniscus.

The best-case scenario is to tape your intersection from a few floors up — like from a parking garage, a roof or a public place. But that requires some advance planning and luck. It also would help far more when tallying your end totals.

I chose to record standard speed rather than tape in a time-lapse mode or using an interval, Why?  I wanted to have the full video in case I wanted to use segments in other future Streetfilms and in case anti-bike nimrods accused me of manipulating the numbers. Plus, I wanted to make sure I didn’t miss any cars or riders. And since you’ll be counting later, it’s easier to scrub thru your footage if you want to fast forward thru breaks with nothing much to count. Plan on doing a few 15-minute counts. At least do 15-20 minutes once for an accurate read. (Below is the video from Second Avenue):

Once I finished my counting of each mode (I counted at least twice thru for each segment and had to do each in separate passes) then I started editing by speeding up most of the footage. After all, no one wants to watch a long video of a static scene (unless it’s Andy Warhol’s “Empire”). So I sped up some chunks by as much as 10x or more for the final cut. In the First Avenue video I also threw in a few facts to keep watchers a little more engaged.

The result? The videos really jumpstarted a debate of how crowded our NYC bike lanes are getting. On First Avenue, the ratio of cars to bicycles was nearly 1:1 (which shocked me)! As a result of the videos, a half-dozen elected officials have endorsed widening bike lanes when they get overcrowded! You can do the same in your city or neighborhood.

There are numerous other examples I have kept in mind from over the years. This above video from Copenhagen looking down from a rooftop on one of the busiest bike routes in the city is very cool (and shows that cars still get way too much space even in Europe).

And when Luke Ohlson (then working for Transportation Alternatives) did this time lapse four years ago showing how much use a Citi Bike dock gets on Broadway, right away it is apparent that spatially bike share serves far more people than a few parking spaces for cars ever would.

In the last two weeks I have gotten nearly a dozen requests from people to tape bikes vs cars (or just bikes) in places all over New York. But I just don’t have the time so I really hope to see plenty of others going forth and giving it a shot. Make sure to tag me on Twitter @streetfilms with your videos and I will certainly help promote them with a retweet!