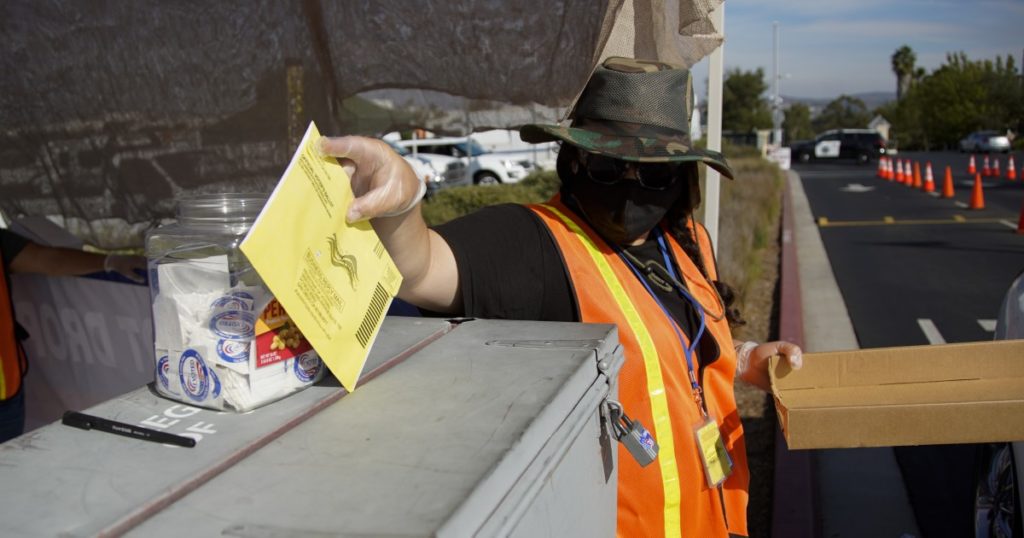 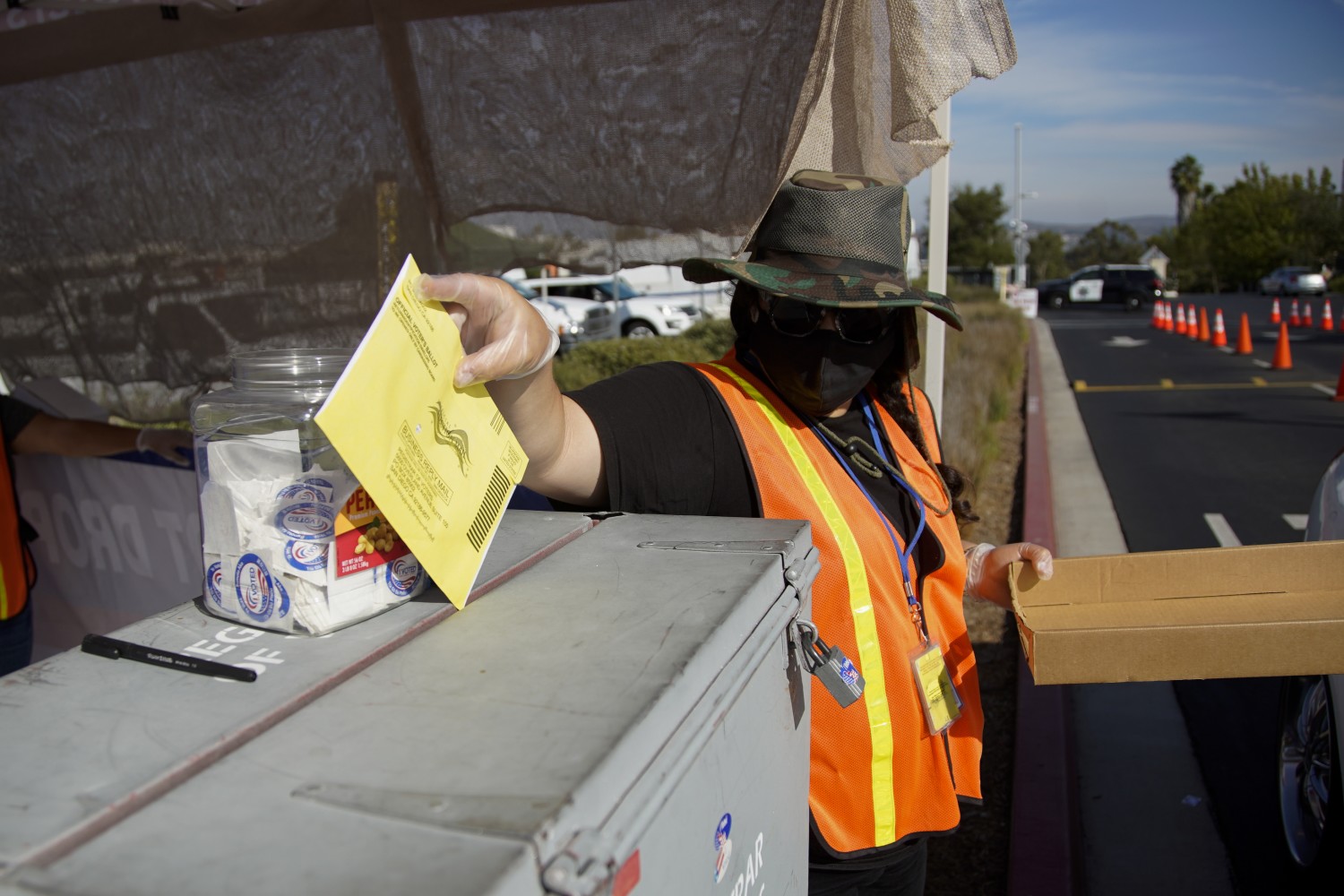 California officials have agreed to pay the balance on a $35-million contract for voter outreach due last fall, after months of wrangling over the payment details and Republican criticism of the company that did the work for its close ties to President Biden.

The contract is also the subject of a lawsuit filed last year by the Howard Jarvis Taxpayers Assn., which alleges the office of then-Secretary of State Alex Padilla violated state regulations by allowing only a small number of “partisan political consulting firms” to bid on the work.

Gov. Gavin Newsom signed legislation Tuesday affirming that the contract, awarded last year to SKDKnickerbocker for a statewide voter education campaign, can be paid from a combination of state and federal funds. Legislators added the provision last week to one of the bills related to a broad COVID-19 stimulus package aimed at helping low-income Californians and providing relief assistance for small businesses.

But the new authorization to pay the public affairs and consulting firm, which once boasted on its website that it was “on Team Biden” during the fall campaign, did not go unnoticed by its critics — even though the long delay in payment stemmed not from the firm’s political alliances but because of a dispute over the rules in last summer’s state budget agreement governing election-related expenses.

“We should never allow one of our agencies to go out and do a [contract] with a handful of people being able to apply for it and not do it in the daylight,” state Sen. Brian Dahle (R-Bieber) said during a Senate floor debate on Monday.

The contract was awarded to SKDKnickerbocker in August, one of seven public affairs firms that bid on a project intended to boost voter participation in the Nov. 3 election, in which millions of Californians cast ballots remotely for the first time while navigating other changes to election practices made in response to the COVID-19 pandemic. A fact sheet provided by the secretary of state’s office last fall says the company was selected through an “emergency contract process — available under state law — while ensuring a competitive process that is both transparent and consistent with state regulations.”

Supporters of the project said it was designed to ensure Californians felt comfortable with and trusted voting by mail or in a location other than a traditional polling place. It also provided for communications services to respond, as needed, to reports of voting irregularities or to counter any false claims about widespread voter fraud.

The voter outreach program also had the potential to boost the visibility of Padilla, who had served as California’s chief elections officer since 2015 and was widely viewed for much of the election season as the likely replacement for then-Sen. Kamala Harris if she was elected vice president. Newsom announced his selection of Padilla on Dec. 22, after projections showed Biden and Harris had enough electoral college votes to win office.

A memo from SKDKnickerbocker to state elections officials on Sept. 3 said the voter awareness effort would include “higher profile media opportunities” for Padilla.

“All of our work to refine the angles and themes we are actively pushing in the media will center around maintaining the reputation of the Secretary of State’s office or the credibility of the election itself,” the memo said.

But the company maintained its strong ties to Democrats during the election season — including the work of partner Anita Dunn, a former Obama administration official, as a top strategist to Biden. In California, SKDKnickerbocker was paid a total of more than $341,000 to work on campaigns opposing Republican Reps. Mike Garcia, Michelle Steel and Darrell Issa, all of whom won their congressional races in November. And it was paid another $98,000 for work on the effort to defeat the incoming state Senate GOP leader, Sen. Scott Wilk (R-Santa Clarita).

“Imagine the outcry if Democrats found out the state awarded a $35-million contract under the guise of ‘Vote Safe California’ to an organization with strong conservative ties,” Jessica Millan Patterson, chairwoman of the California Republican Party, said in a written statement. “The hypocrisy is astounding — Democrats must be held accountable for their actions.”

The contract, while controversial to some, would likely have moved forward without delay if not for a dispute last October between state Controller Betty Yee and Padilla over the rules governing its payment. Yee said there was insufficient authority in the budget signed by Newsom in June to spend money on a statewide voter education program. She refused to write checks covering the 19 invoices submitted by SKDKnickerbocker, which totaled $34.2 million.

On Oct. 9, the Jarvis taxpayers group filed a lawsuit seeking to block payment of the contract, alleging violations of state contracting rules and citing Yee’s refusal to accept the plan. The legal challenge is still pending and the association’s president, Jon Coupal, said the new spending authority given by lawmakers and Newsom might not be enough.

The lawsuit claims the use of federal funds earmarked for local elections operations — which are still part of the agreement Newsom signed — is illegal. It also alleges only a select number of public affairs firms were invited to apply for the job.

“I think that [the secretary of state] and controller realize that this case is not just going to magically disappear,” Coupal said.

Yee’s office did not respond to a request for comment on the bill signed Tuesday by Newsom and the legality of paying the contract. A spokesperson for Padilla’s successor, Secretary of State Shirley Weber, said her office is appreciative of the effort to “clarify budget authority” for the 2020 voter outreach effort.