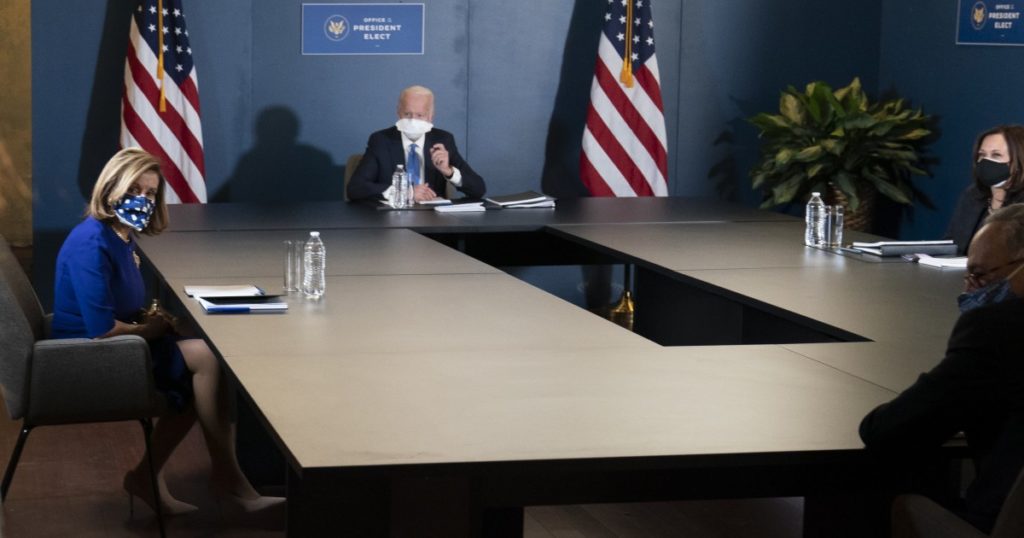 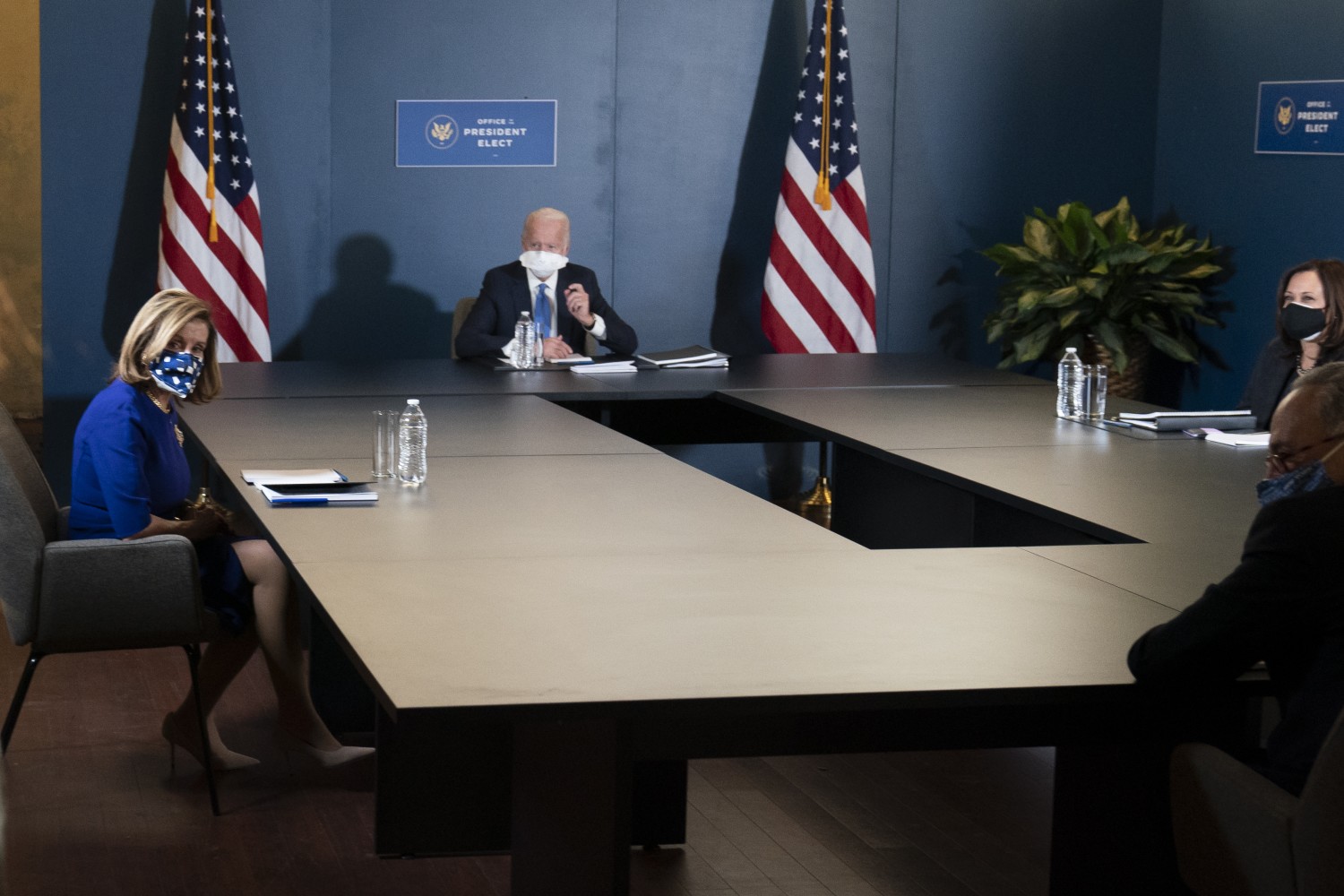 Joe Biden’s first two weeks as president-elect have been a throwback to days of yore, when presidents were, well, presidential — one of the many norms that Donald Trump busted during his years in the White House.

Since being declared the election winner, Biden has consulted national security and health experts. He’s had somber chats with world leaders. He’s convened groups of governors, congressional leaders, labor and business bigwigs. He has listened via videoconference to healthcare workers describing their coping with the COVID-19 pandemic, even shedding a public tear with one.

Meanwhile, President Trump has refused to concede and taken ever more brazen steps, legally and politically, to reverse his election defeat. Yet he’s shown little sign of performing the job he’s trying so hard to keep. On Saturday, Trump left the virtual G-20 summit to play golf as other leaders, including those of Germany, France, South Korea and Italy, discussed by video a global response to the worsening pandemic.

The result is a vivid split-screen view of the presidency: While Trump puts governing responsibilities on the back burner to mount his all but doomed rearguard action to hold power, Biden is modeling the role of president as he builds his administration-in-waiting.

He has responded to Trump’s intransigence by expressing supreme confidence in his own status as president-elect, following the advice of former First Lady Michelle Obama: When they go low, we go high.

Some Democrats wonder whether Biden needs to make a more forceful response to Trump for what amounts to an attack on democracy. He has called the president’s actions “embarrassing” to Trump and the nation, but, for now, Biden has left the most pointed takedowns of Trump’s maneuvering to aides and allies. “It’s absolutely appalling … it’s also pathetic,” said Biden legal advisor Bob Bauer.

Biden’s strategy has been to focus, with increasing urgency, on the public health and national security risks of Trump’s failure to cooperate in easing the transition and denying Biden’s team access to federal agencies’ data and resources. The president-elect is betting that his election mandate is to keep his cool and be the adult in the room.

“Biden got hired because the public wanted something like this,” said former Democratic Party Chairman Howard Dean. “They didn’t want four more years of reality TV and Sturm und Drang.”

Biden’s determination to not fly off the handle is visible every time reporters ask him about Trump’s attacks on the legitimacy of the election result.

He pauses to compose himself, shakes his head a bit and says something like, “Let me choose my words.” It is a marked contrast to Biden’s impassioned critiques of Trump during the campaign.

Now his demeanor sends the clear message: The campaign is over.

Jill Alper, a Michigan-based Democratic strategist who is a veteran of past presidential campaigns, called the Biden transition team’s approach to Trump “pitch perfect.”

“It reminds me of a lesson in Sun Tzu’s ‘Art of War’: ‘The supreme art of war is to subdue the enemy without fighting.’ And there is no need to fight,” she said. “The best thing Biden can do is move quickly to assemble his team, end the pandemic and build back the economy. And that’s what he’s doing.”

Biden’s strategy mirrors his campaign’s in one important respect: Just about everything he does is intended to draw a contrast with Trump.

“You’ve seen, over the last several days, Donald Trump holed up in the White House consulting with people like Rudy Giuliani and … hatching conspiracy theories about Venezuela and China,” Bauer said. “And you’ve seen President-elect Biden meeting on a bipartisan basis with governors, addressing the public health emergency, and acting like the president-elect he is and the president that he soon will be.”

Biden has been especially visible during this interregnum, holding some kind of public event or announcing senior staff appointments almost every day. Trump, meanwhile, has all but disappeared from the public stage.

Friday, when he announced a policy to reduce the cost of prescription drugs from the White House briefing room, it was only his third public appearance since election night.

“Biden is playing the role of reassurer-in-chief,” said Paul Light, a New York University professor who is an expert on presidential transitions. “He has to be out there, and the transition has to get underway, to reassure people that somebody is at home. Trump has virtually disappeared.”

Americans are giving Biden good marks. A poll released Friday by the nonpartisan Pew Research Center found that 62% of voters rated Biden’s postelection conduct good or excellent, double the percentage who said the same about Trump.

Biden’s transition is a down payment toward fulfilling his campaign promise to restore stability to government after Trump’s tumultuous reign.

Prizing both personal loyalty and competence, Biden is assembling a White House staff packed with longtime confidants and experienced Washington hands. Ron Klain, who will be his chief of staff, has a history with Biden and the Democratic establishment that reaches back to the 1980s; so do top advisors Steve Ricchetti and Mike Donilon.

One complication: Biden was supported not just by voters craving normalcy, but also by progressives who want far-reaching change in economic and social policies.

That wing of the party is watching carefully as he builds his Cabinet, and is pushing him to reach beyond establishment regulars to give the left a strong voice.

Many dreamed of seeing Warren in a top post such as Treasury secretary, but that seems unlikely — if only because of the political risk of removing her from the narrowly divided Senate when Massachusetts’ Republican governor would name a replacement.

Sen. Bernie Sanders (I-Vt.), the last primary rival to be vanquished by Biden, is being promoted — by progressives and himself — for Labor secretary.

“It seems to me pretty clear that progressive views need to be expressed within a Biden administration,” Sanders said in an interview with the Associated Press. “It would be, for example, enormously insulting if Biden put together a ‘team of rivals’ — and there’s some discussion that that’s what he intends to do — which might include Republicans and conservative Democrats, but which ignored the progressive community. I think that would be very, very unfortunate.”

Some progressives have already sniped about a few of Biden’s early picks for his staff and transition team. The Sunrise Movement, a group of young environmental activists, called it a “betrayal” of Biden’s commitment to combat climate change that he tapped Richmond, who has received large political donations from the oil and gas industry — hardly a surprise given that it is a major employer in his House district.

Demand Justice and other groups on the left have complained that Biden’s transition advisors include many with corporate ties.

Progressives have mounted campaigns to discourage Biden from offering Cabinet posts to people including Rahm Emanuel, a former advisor to President Obama whom they consider too moderate and criticize for his handling, as Chicago mayor, of the police shooting of a Black teenager.

Jen Psaki, a transition spokeswoman, responded in a briefing for reporters Friday, saying, “I would encourage people to wait until we’ve made even one announcement about a Cabinet member — and certainly more than just a dozen White House names — before they pass judgment.”

Progressives and moderates alike praised Klain’s appointment as chief of staff. Members of the so-called Squad of progressive House Democratic women of color, including Rep. Alexandria Ocasio-Cortez of New York, gave him high marks for his willingness to listen.

Still, Biden’s honeymoon may be short. Ocasio-Cortez and her colleagues Thursday spoke at a Sunrise Movement demonstration in front of the Democratic National Committee headquarters, with a “Biden be brave” banner unfurled, to demand that the president-elect not falter in pursuing the aggressive climate policies he ran on.

“That’s what our next move is, to make sure the Biden administration keep its promise,” Ocasio-Cortez said. “We have to organize for it. We have to bring the heat for it.”