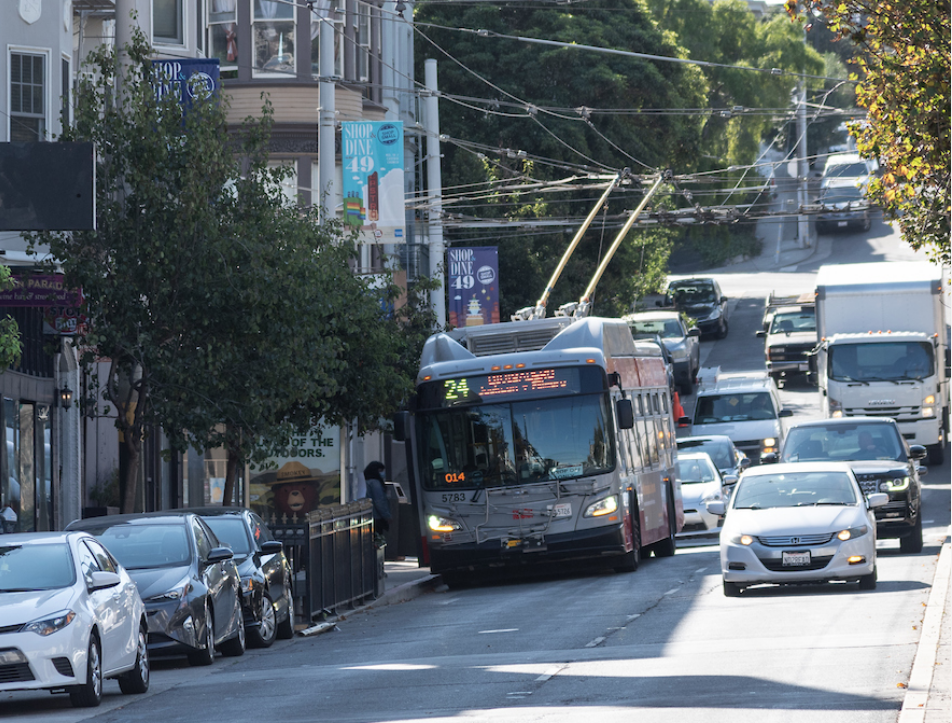 SFMTA is holding outreach meetings to get feedback on planned changes on the Divisadero Corridor to improve the speed and reliability of the Muni 24 bus. From the project page:

The 24 Divisadero provides critical north-south transit service for workers, residents, students, shoppers, seniors, the disabled, and others without access to private vehicles as well as serving neighborhoods with high percentages of people of color and low-income households.

SFMTA refers to the section between Geary and Waller as a “significant bottleneck…where buses are frequently caught in traffic.” A 2017  survey done by the agency indicates that 56 percent of riders on the 24 were people of color and transit speeds are as low as 5 mph, thanks to congestion caused by private automobiles.

That seems like a strong argument for giving the 24 a dedicated lane, as was done successfully on Mission.

Instead, as seen in the SFMTA map below, the plan is to restrict left turns.

Advocates, including tipster Elias Zamaria who emailed Streetsblog about this issue, were quick to call out the double-talk of doing “public outreach” while removing bus lanes as an option without public consultation. Or, as advocate Scott Feeney put it:

The San Francisco Transit Riders Cat Carter told Streetsblog they’d certainly like to see transit-only lanes on Divis, but accept that restricting left turns is more politically practical and welcome in the short term. “Removing enough parking on the Divisadero Corridor and to do it right with sidewalk widening and other improvements would likely mean a significant street redesign,” she said. “And we would love to see that–it would benefit the tens of thousands 24 riders as well as the merchant corridor–but that is a much larger project of a much bigger scope.”

However, in Streetsblog’s view, Divis was an obvious corridor for Temporary Emergency Transit Lanes (TETL). These bus-only lanes were installed on a handful of streets to assure that buses maintained speed and reliability and wouldn’t become overcrowded during the pandemic. Once established, say transit advocates, it’s much easier to talk about whether or not the bus lanes are worth making permanent. But, according to one source close to the SFMTA and City Hall, for that to have happened Supervisor Dean Preston, whose district encompasses the Divisadero Corridor, needed to request them. Streetsblog reached out to SFMTA for more information, but the agency’s page on the TETL program says: “24 Divisadero: Divisadero Street from Clay to Waller streets (TEMPORARILY PAUSED).”

“As a Muni rider for 26 years, the Supervisor remains committed to public transportation and making sure it is affordable and improving service,” wrote a spokesperson for Preston in a text to Streetsblog. On the specifics of removing parking, the spokesperson suggested Streetsblog reference the SFMTA documents on the project. (On a related note, the Board of Supervisors voted 7 – 4 to pass Supervisor Preston’s “Free Muni Pilot” as Streetsblog was working on this post. “Supervisors Ronen, Walton, Chan, Mar, and Peskin joined Supervisor Preston and lead co-author Supervisor Haney in supporting the measure. Under the proposal, Muni would be free from July 1, 2021 through September 30, 2021,” according to a release from Preston’s office)

Meanwhile, Streetsblog readers can take the SFMTA Divis Corridor survey HERE. And the next public meeting of the 24 Divisadero Transit and Safety Project is this Thursday, May 27, 4-6 p.m. Join via Microsoft Teams or by calling in at 415.915.0757, phone conference ID: 266 884 836#.

If approved, the left turn restrictions will be put in place this summer.