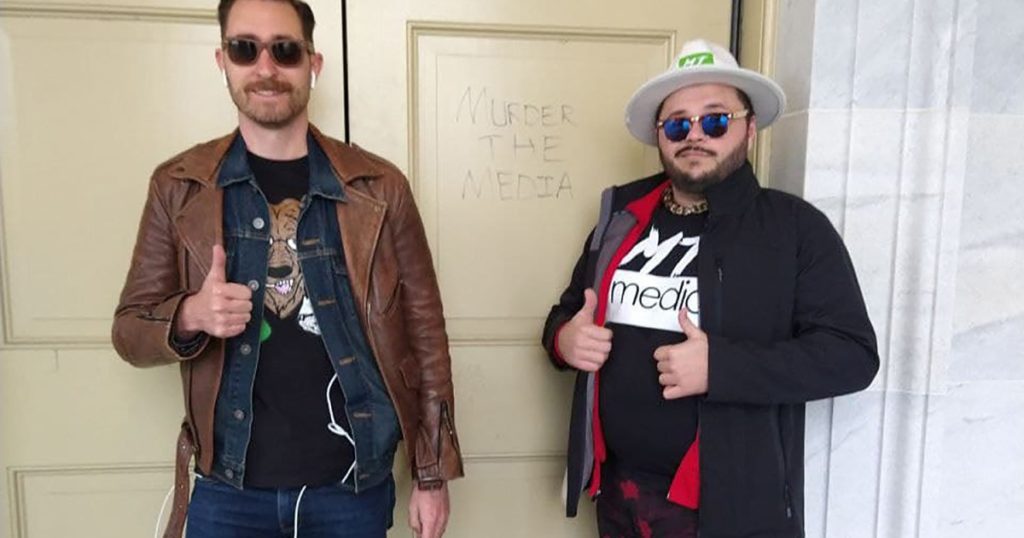 When the live streamer known as Dick NeCarlo entered the U.S. Capitol last week with a mob incited by President Trump, he said he wasn’t there to join the insurrection but to report on the mayhem shaking the nation.

But NeCarlo was treading a blurred line between journalism and activism for a far-right cause. He and colleague Nicholas Ochs were dispatched by Murder the Media, a right-wing company based in Monte Rio, Calif., that posts video and livestreams. NeCarlo donned an MT Media shirt and hat. Ochs — host of “The Ochs Report” and leader of the far-right nationalist Proud Boys in Hawaii — wore an MT Media badge.

They interviewed pro-Trump extremists and followed them into the Capitol. The two — who view themselves as gonzo journalists in the image of the late Hunter S. Thompson — paused for a photograph in front of a door where someone had scrawled “Murder the Media.” They identified themselves as reporters to police, who didn’t stop them, NeCarlo said.

“One did ask us when we were going to leave,” he said later by phone. “We said we’ll leave when we’re done reporting on it — when we’ve got our scoop.”

But there was less journalism and more far-right sentiment evident in video the two men soon posted: “Congress stopped the vote when we stormed the Capitol. As we’ve been saying all day: We came here to stop the steal,” says Ochs.

“We did it!” NeCarlo replied. “That’s what I came down here to do. That’s what we did.”

Some mainstream journalists were threatened and beaten by the crowd, but NeCarlo and Ochs emerged unscathed.

The next day, Ochs was arrested by the FBI on federal charges of unlawful entry into a restricted building. His Twitter account was shut down. NeCarlo continued to discuss the siege online.

Their actions crystalized the often overlapping roles of many “citizen journalists” in a world where technology and politics collide in promoting a variety of movements, including antifa anarchy, white supremacist venom and marches against racial injustice.

“What I did was journalism: Follow the events and show people what happened,” said NeCarlo, who uses a scrambled version of his real name, which he declined to disclose given the crackdown. “I’m not doing anything wrong.”

During the last year’s Trump rallies and Black Lives Matter protests across a polarized America, writers and videographers not aligned with traditional news organizations have emerged as valuable — if partisan — news sources. Their Facebook pages, Twitter accounts and livestreams on websites like Twitch and DLive have attracted hundreds of thousands of followers looking for on-the-ground, up-to-the-minute reporting. Many have used their streams to raise money for the causes they cover.

As the lines have blurred between advocacy journalism and activism, this breed of reporter, which has a deep distrust of the mainstream media, has increasingly faced arrest and censorship, culminating in a crackdown after the Capitol siege that left some arrested, others without online platforms. The attack on the Capitol also raised questions about who is considered a journalist, and whether the 1st Amendment applies when the law is broken.

“Not everyone qualifies as a journalist,” said David Hudson, an assistant law professor at Nashville’s Belmont University and a 1st Amendment fellow at the nonprofit Freedom Forum. “Even in the age of citizen journalism and participatory journalism — and no doubt there have been some valuable contributions from some citizen journalists — there has to be some limit.”

Hudson said the law considers someone a journalist “if they are engaged in investigative reporting, gathering news, and have the intent to disseminate such information to the public.” But the law is unclear on where to draw the line between advocacy and reporting. Some courts have found bloggers to be journalists, while others haven’t.

“At some point, we do need to address who exactly qualifies,” he said.

“The very best citizen journalists now have huge followings in their own right,” said Richardson, an assistant professor of communication and journalism at USC’s Annenberg School. “They often have tens of thousands of followers on Instagram and TikTok. On the ground though, they may appear to be indistinguishable from protesters.”

Richardson said she would recognize those like NeCarlo who ventured inside the Capitol as journalists, “especially if they have established livestreams and dedicated channels.” Like mainstream counterparts, they work in an increasingly hostile environment where they may be assaulted by police.

“Citizen journalists have taken on even more of a role as the first responders of the profession,” Richardson said, supplying photos and videos that are then contextualized by mainstream media. “This is serious, dangerous work for the unidentified citizen journalist.”

While covering Black Lives Matter protests after the police shooting of Jacob Blake in Kenosha, Wis., last fall, C.J. Halliburton livestreamed the shooting of three protesters by 17-year-old Kyle Rittenhouse, pausing to render first aid. Rittenhouse has since been charged in connection with the shooting, and Halliburton’s footage was submitted as evidence.

Halliburton started his livestream, CJTV, to cover Black Lives Matter protests in his hometown of Seattle after the killing of George Floyd at the hands of Minneapolis police in May. He built a following of about 50,000. More than 5,000 people tuned in to CJTV’s live coverage of the Capitol riot. Halliburton calls himself an independent livestream journalist, but he’s also seen people wearing “Press” labels protesting in Kenosha, Louisville, Ky., Los Angeles and Portland, Ore.

“There’s an element of participation that you have to really maintain a fine line on,” he said. “Every protest wants to claim you as their own. I’ve made it very clear I’m not on a side — I’m the eyes and ears of the people.”

His sister Shama Bartlett covered the Capitol rally for CJTV last week but did not enter the building with protesters, interviewing them as they left instead because she “felt a moral obligation to not support the actions.” She captured footage and questioned a man wearing a helmet and vest labeled “Press” confronting police. The man was later sought by the FBI in connection with the rally.

“I think it all comes down to intent,” Bartlett said. “Are you there to make the news or to report the news? C.J. and I have a policy: See the news; don’t be the news.”

But after Black Zebra posted video of a California Highway Patrol officer restraining a protester with a knee to the neck, its page was temporarily taken down by Facebook. They’ve also been targeted by police, Zingapan said.

“We haven’t been able to stand and record things happening in our community without harassment, violence and ongoing state repression from multiple law enforcement agencies, including federal ones,” she said. “God forbid we try to storm something. I don’t think we would have come out alive.”

Rachelle Dixon also straddles activism and journalism. The interim director of Black Lives Matter Portland, she has been freelance reporting and photographing for years and is in the process of getting a press pass through KBOO, a community radio station. Her rule: “A journalist doesn’t participate.”

“There is a line that has definitely been blurred,” she said. “When I go down to document what’s happening I have to document everything, not just the things that support my point of view. Once you start taking selfies and joking with the participants, you’re participating, and people who participated [in the Capitol siege] need to be charged. The fact that they’re joking about it means they don’t take this seriously.”

Ochs and NeCarlo appear to have drawn less of a distinction between objective reporting and participating. As Ochs left the Capitol last Wednesday, he posted a photo on Twitter of himself and NeCarlo smoking inside, captioned, “Hello from the Capital lol.” He also posted videos on Telegram.

“We actually stopped the steal,” Ochs said. “It may resume, but the steal is for now stopped. You’re welcome, America!”

When Ochs, who staged an unsuccessful state legislative campaign last year, flew home to Honolulu, he was arrested at the airport. The FBI is seeking to transfer him to Washington.

In charging Ochs, a federal agent cited the photo Ochs posted on Twitter of himself and NeCarlo in the Capitol as well as comments Ochs made to CNN confirming that he had gone inside as a “professional journalist,” according to court records.

On Monday, Ochs appeared by phone from jail at federal court in Honolulu. A prosecutor asked the judge to bar Ochs from the Capitol grounds and from attending future protests. The judge declined, and allowed Ochs to be released on a $5,000 bond. His attorney did not respond to calls for comment, but Ochs posted a message to followers Monday on Telegram: “Out on bond. Thanks for the support, y’all are great!”

Twitter removed Ochs’ account last week, and his Parler account disappeared when the social media company was forced to shut down by its host, Amazon. Murder the Media videos were also removed by DLive.

NeCarlo, self-employed in crypto-investments, has worked for Murder the Media for four years, often wearing a beard, hat and sunglasses.

“We want to be as unique as possible with our coverage. That involves taking risks, getting close to the action, talking to everyone, not just figureheads,” he said.

At the Capitol, “the goal was to show you firsthand what was happening,” he added.

NeCarlo described himself as “right-leaning” — not Republican, Libertarian or a QAnon conspiracy theorist. At times he’s been a Trump critic. He’s accustomed to being censored by social media (“I’m on my fourth Twitter account,” he says), but resents that law enforcement doesn’t recognize what he and Ochs did at the Capitol as journalism.

He saw Black Lives Matter activist John Sullivan of Insurgence USA praised by Anderson Cooper on CNN for reporting from the Capitol on his phone. “How is he labeled a journalist and Nick Ochs a terrorist?” NeCarlo said.

NeCarlo noted that other mainstream or “legacy” media were inside the Capitol too, “but because they have the right opinions or don’t have opinions, they weren’t targeted” by law enforcement afterward.

NeCarlo also resents that social media companies have cracked down on right-wing independent reporters since the Capitol attack, but have not applied the same standards to advocacy journalists covering antifa and Black Lives Matter.

“All these other riots that were going on last year were covered just fine but then they nuked us,” he said. “It’s like all the tech companies, because of all the pressure they’ve had from the [left-wing] activists, they sort of determine what you can cover and the opinion you can have.”

Unable to livestream during the Trump rally due to network issues, NeCarlo said he’s now waiting until he’s sure Ochs is OK before releasing video he filmed at the Capitol. He plans to continue covering rallies in coming days.