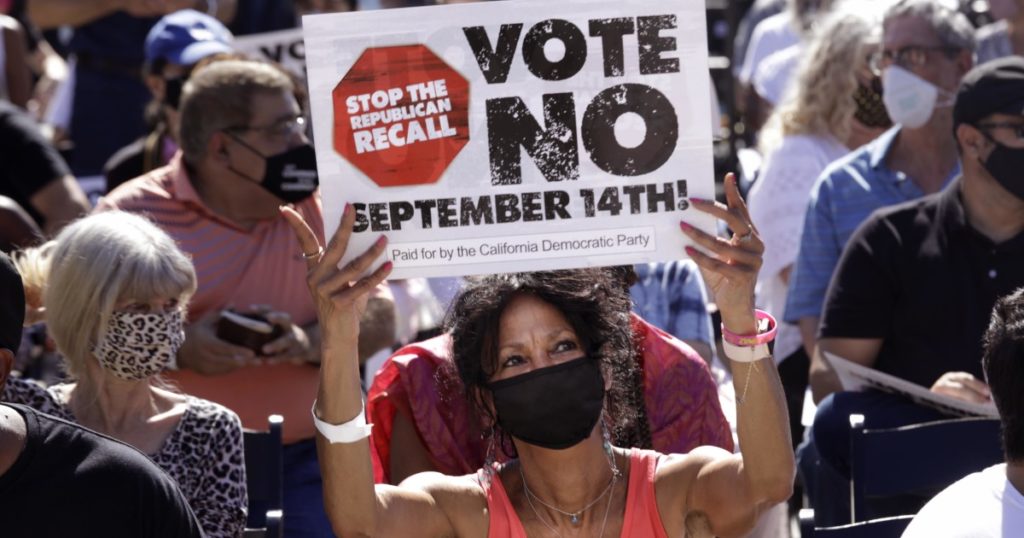 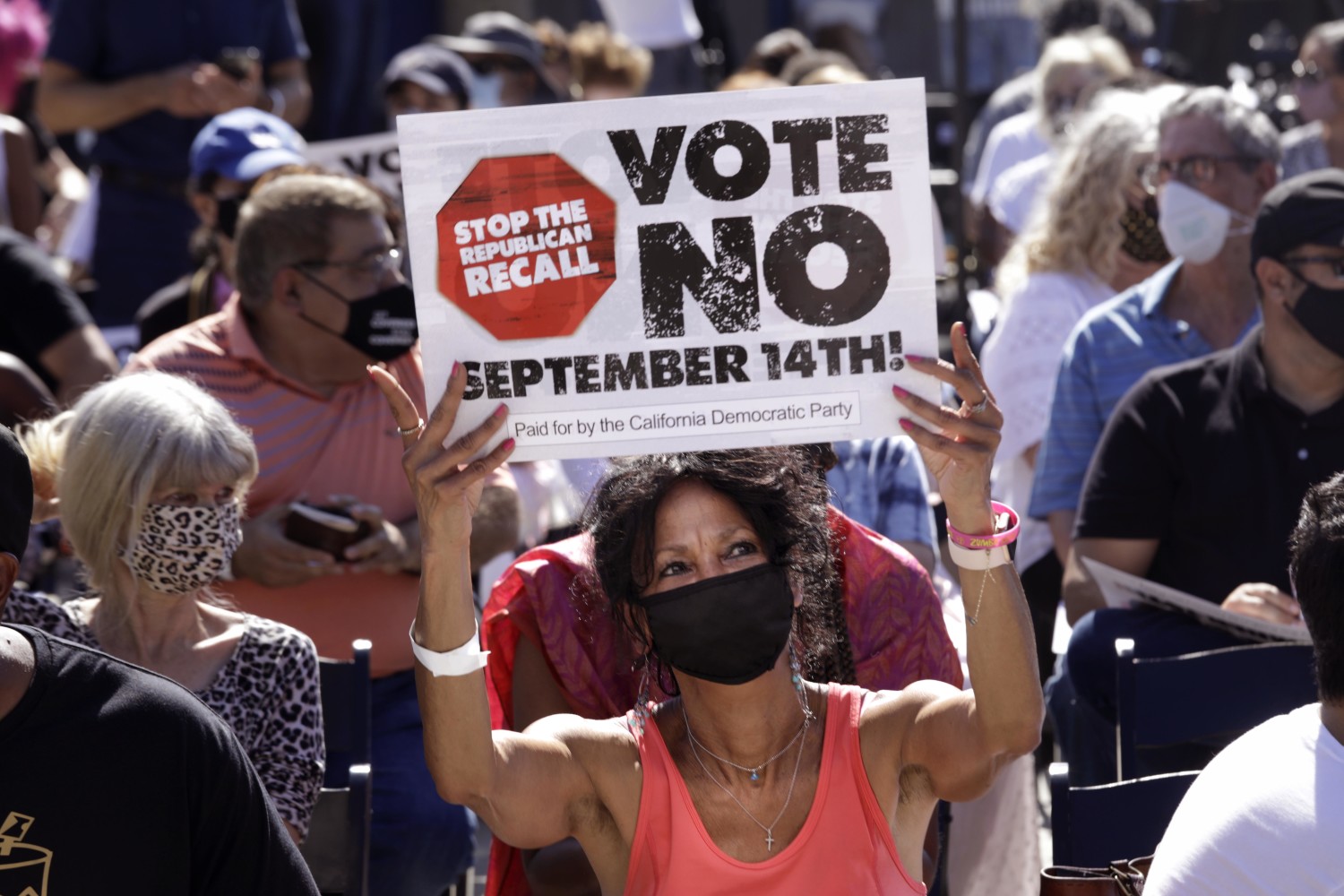 Politics is about math. And if you’re outnumbered 2 to 1, you invariably lose. That’s how Republicans started their recall fight and the way they’re ending it — apparent losers again.

Voting won’t be over until Sept. 14. We could be surprised. The polls may be wrong and the initial pace of ballot returns perhaps is misleading.

But the signs point so far to a wasteful GOP misadventure and political survival for Democratic Gov. Gavin Newsom.

A new poll last week by the nonpartisan Public Policy Institute of California found that 58% of likely voters oppose recalling Newsom. Only 39% want to oust him.

PPIC surveys have showed practically the same margin of Newsom support all year, largely a product of political polarization. Democrats heavily back the governor and Republicans overwhelmingly want him yanked from office. But there are nearly twice as many Democratic registered voters as Republicans in California.

The GOP has made no progress trying to persuade voters to fire the guy before his contract is up at the end of next year, based on PPIC polling. Other surveys have shown a closer contest, but virtually all have had Newsom at least slightly ahead.

And ballot tracking shows that Democratic voters apparently aren’t as apathetic as Newsom strategists had feared and we journalists have been reporting. At least they’re interested enough to be voting by mail relatively swiftly.

Meanwhile, Republicans haven’t been leaping to the mailbox with their ballots, far from being the excited voters eager to dump the Democratic governor that we’d expected.

It’s not clear what that means.

Numbers guru Paul Mitchell, vice president of Political Data Inc., who has been tracking the ballots, speculates it’s because Republicans’ minds were poisoned by former President Trump about alleged insecurity of mail ballots. They’ve been waiting to cast their ballots in person, he thinks.

“The conservative electorate became polarized about methods of voting,” Mitchell wrote in a blog Saturday. “Party leadership and talking heads promoted voter fraud conspiracies. This pushed many of their voters to want to vote at the polls.”

Conversely, Democrats in 2020 were warned that the Postal Service would be delivering ballots by donkey train and they’d better mail them early. That attitude may be carrying over into this year, he says.

As of Saturday, voters had returned 24% of the ballots mailed to them. Democrats had mailed back 28% of their ballots, Republicans 25% and independents 18%. More than twice as many Democrats have voted as Republicans.

“We’ve got to assume the final turnout is going to be above 50% and that’s the kind of turnout Newsom needs,” Mitchell says.

Something else is happening, but it’s not a surprise. Republican voters are hanging with the right — and are in danger of hanging themselves.

Republicans still haven’t learned their history lesson. There hasn’t been a conservative elected California governor since Ronald Reagan 55 years ago. And he governed as a moderate.

“Rather than adjusting to the new reality, Republicans have been regressing to some mythical California of the past which really never existed,” says GOP strategist Mike Madrid, an outspoken critic of Trumpism.

“It’s a martyr complex. They see themselves as the last stand at the Alamo.”

PPIC president and pollster Mark Baldassare puts it this way: “If Republicans want to win, they’ve got to find their way to the middle with candidates who appeal to voters outside the party that are not so doctrinaire.”

In the recall election, Republicans had a unique — if outside — chance of regaining relevancy in statewide politics. But they apparently squandered it.

The GOP could have captured the governor’s office if it had persuaded enough moderate Democrats and independents to vote “yes” on the recall. Republican candidates were the only major competitors to replace Newsom. He legally couldn’t replace himself. All other prominent Democrats were pressured by Newsom not to enter the contest.

But most Democratic and independent voters aren’t likely to back a right-wing Republican. And if it appears that one could become governor by voters dumping Newsom, they won’t support the recall either, regardless of whether they’re not wild about the incumbent.

That appears to be what is happening. Right-wing talk radio host Larry Elder is running far ahead in the replacement race, supported by 57% of Republican voters, the PPIC poll shows. And he’s carrying enough verbal baggage from 30 years of shock radio rhetoric to arm Newsom with ample ammunition to scare Democrats into voting against the recall.

Now Newsom has been handed a new gift: the abortion issue, historically a winner for California Democrats. With the conservative Supreme Court giving Texas the green light to outlaw abortions after six weeks of pregnancy, Newsom has been pounding Elder for opposing abortion rights.

The Republican candidate originally thought to have had the best shot at replacing Newsom was moderate former San Diego Mayor Kevin Faulconer. He supports abortion rights.

But in an effort to protect his right flank with Republicans, Faulconer announced in the fall that he had voted for Trump. That reversed his previous anti-Trump stance and made him persona non grata to many Democrats and independents.

“He was in a position to be an alternative to Gavin Newsom,” Madrid says, “and he squandered it by climbing up onto Donald Trump’s lap.”

Once Elder entered the race in mid-July, Faulconer was washed up with conservatives anyway.

GOP strategist Rob Stutzman says that except for Faulconer recently, “none of these Republican candidates has been trying to broaden their appeal to independents and Democrats, which is how blue states elect Republicans.”

The math is simple: There aren’t enough California conservatives to elect a governor who doesn’t also attract millions of moderates — even in a recall.