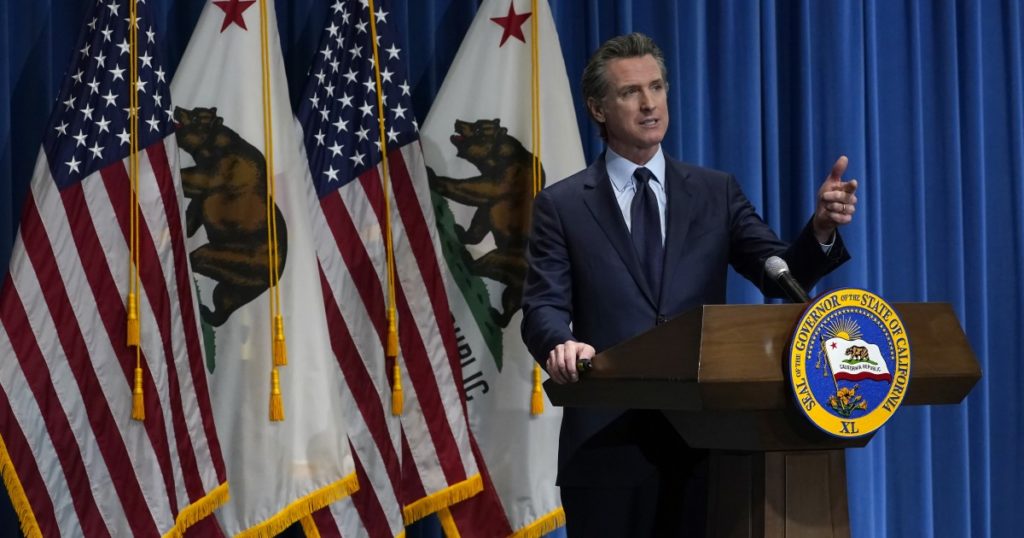 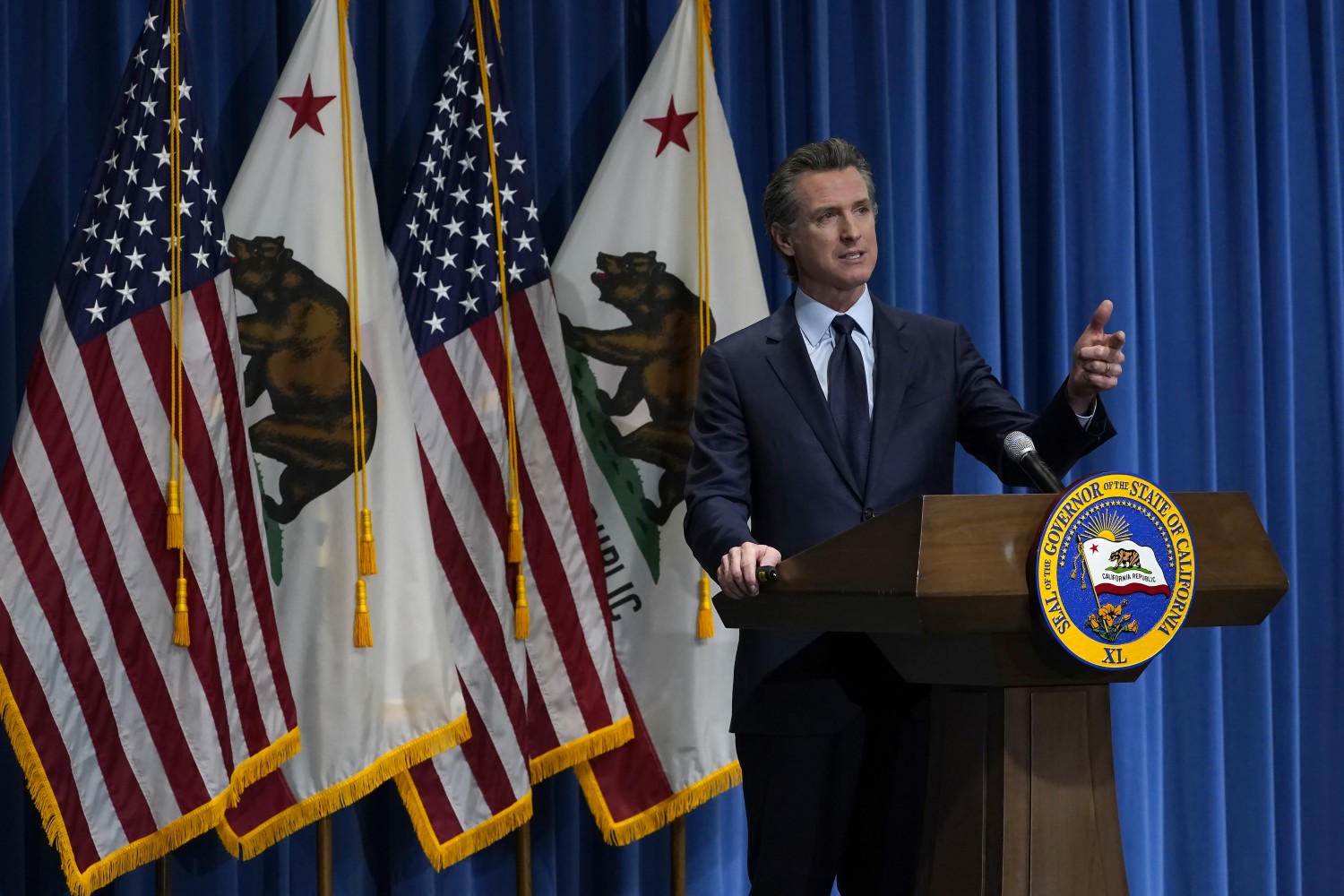 Gov. Gavin Newsom’s latest reshuffling of pandemic rules suggests this paraphrase of an old line: Nothing so concentrates the mind as the thought of a recall.

There has only been one recall of a governor in California history — Democrat Gray Davis in 2003 — and it must still be frighteningly fresh in Newsom’s mind. Back then, he was a member of the San Francisco Board of Supervisors and about to be elected mayor.

The prospect of a Republican-backed recall attempt qualifying for a state ballot seems slightly better than 50-50. But the odds these days of any Democratic governor actually being recalled by voters in this deep blue state are very low without a celebrity Republican challenger — such as an Arnold Schwarzenegger, who ousted Davis. And none is in sight.

But Newsom isn’t ignoring the risk.

“You can’t put your head in the sand,” one gubernatorial insider told me, asking for anonymity. “We’re realists. You have to always be prepared.

“We’re doing what we need to do. But at the end of the day, this is about governing and making sure he’s doing the right things.”

Newsom’s latest moves indicate he’s feeling the public pressure and reacting. Politicians always deny that, as if reading the polls and complying with people’s desires is somehow a sign of weakness — or even sleaziness. To me, these denials are silly.

In a healthy democracy, there’s a delicate balance between leading the voters and following them. Politicians are elected to represent the people’s interests and desires, after all.

Newsom has recently taken swift actions in an effort to get a grip on managing the pandemic, gradually return everyone’s lives to normal and calm anger over the snails-pace delivery of vaccinations, failure to reopen public schools and other complaints. Some major moves:

— He suddenly lifted stay-at-home orders all over the state. It meant reopening outdoor dining, hair salons and other struggling small businesses. People were going stir-crazy in midwinter and restaurateurs were facing bankruptcies. Newsom heard the griping.

— He shifted prioritization for vaccinations to seniors 65 and up. The governor figured that 75% of COVID-19 deaths are in that age group and seniors are more likely to require hospitalization. Getting them vaccinated means clearing hospital rooms, reducing high medical risks and speeding up the time until everyone can resume normal life.

An earlier attempt to vaccinate 65-year-olds became a nightmare when there wasn’t enough vaccine. President Biden has promised larger deliveries to states.

— With websites crashing or unnavigable, Newsom created a state-run site where people can check on their vaccine eligibility and schedule shots. It’s starting as a pilot project in Los Angeles and San Diego counties but is slated to go statewide soon.

Good idea — in theory. But other Sacramento forays into technology haven’t always worked out.

— He hired Blue Shield of California to oversee distribution of vaccine to counties, pharmacies and private healthcare providers. Newsom thought the distribution system needed more centralization because the current locally managed operation was sluggish and inconsistent, depending on the locale.

“We needed help,” the insider says.

Whoa there, countered a coalition of county governments and health officials. In a letter to Newsom, they expressed “tremendous concern” about loss of local control and the role of a “third party” — Blue Shield — “in vaccine allocation without the benefit of local context.”

— Newsom and the Legislature extended until June 30 a program to protect renters from eviction if they’ve been hurt financially by the pandemic. The program was going to expire Sunday. Tenants must pay 25% of their rent to avoid eviction.

We’ll see how this renter relief flies with small landlords who must pay mortgages on their units while losing income.

— There’s an incredible scandal involving fraud, incompetence and past inattention at the state Employment Development Department. Two state audits last week blistered EDD for sending out at least $11 billion in fraudulent unemployment benefits — some to state prisoners and foreign criminal gangs. An additional $19 billion is being investigated.

Newsom inherited the mess. It’s largely the fault of bureaucratic inertia and an outmoded computer system that should have been updated years ago. Now it’s Newsom’s problem to fix. He’s trying, but it’s still pokey and flawed.

— Newsom’s ballyhooed $2-billion back-to-school plan for elementary students is flunking. He set a mid-February target for classroom reopening. Forget it. Another pandemic failure.

One major holdup is that teachers understandably insist on being vaccinated first. But there’s not enough vaccine and teachers are behind healthcare workers and 65-year-olds on the priority list.

“If we wait for the perfect, we might as well just pack it up and be honest with folks that we’re not going to open for in-person instruction this school year,” the agitated governor told school administrators last week.

By the weekend, the recall campaign had collected 1.3 million voter signatures, strategist Dave Gilliard says. The deadline is March 17 for turning in the 1.5 million required to qualify the recall for an election. But about 2 million should be collected to ensure enough signatures are valid.

Even if there is no recall election, Newsom needs to keep his mind concentrated on voters’ grumbling. He’ll be asking them for a second term next year. 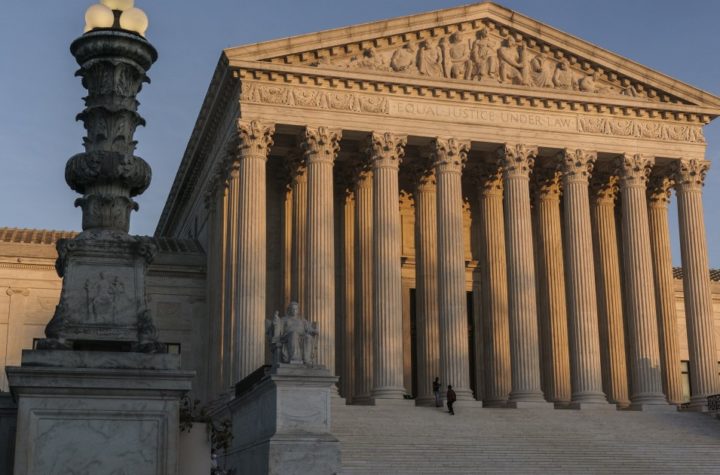 Direct Mail San Diego: What Is It?