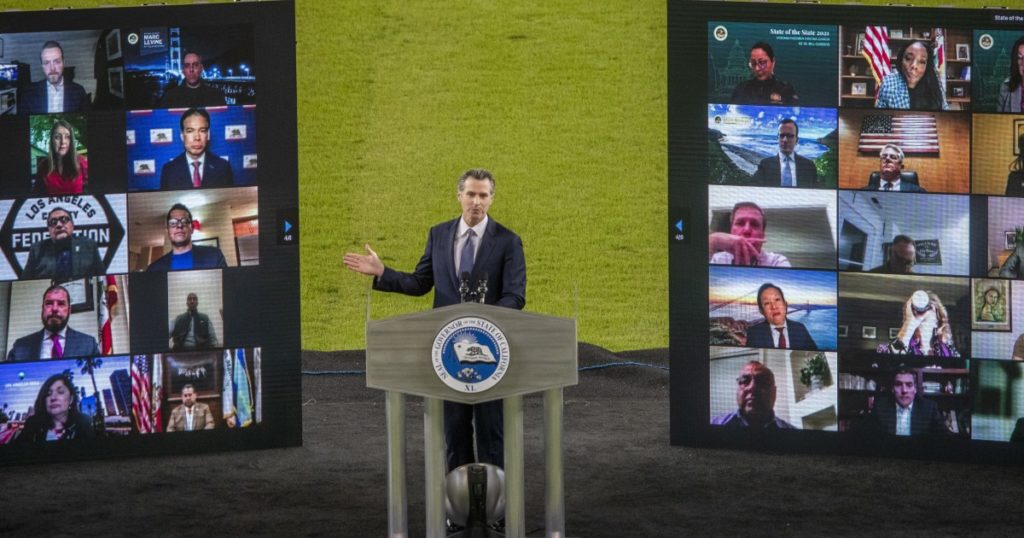 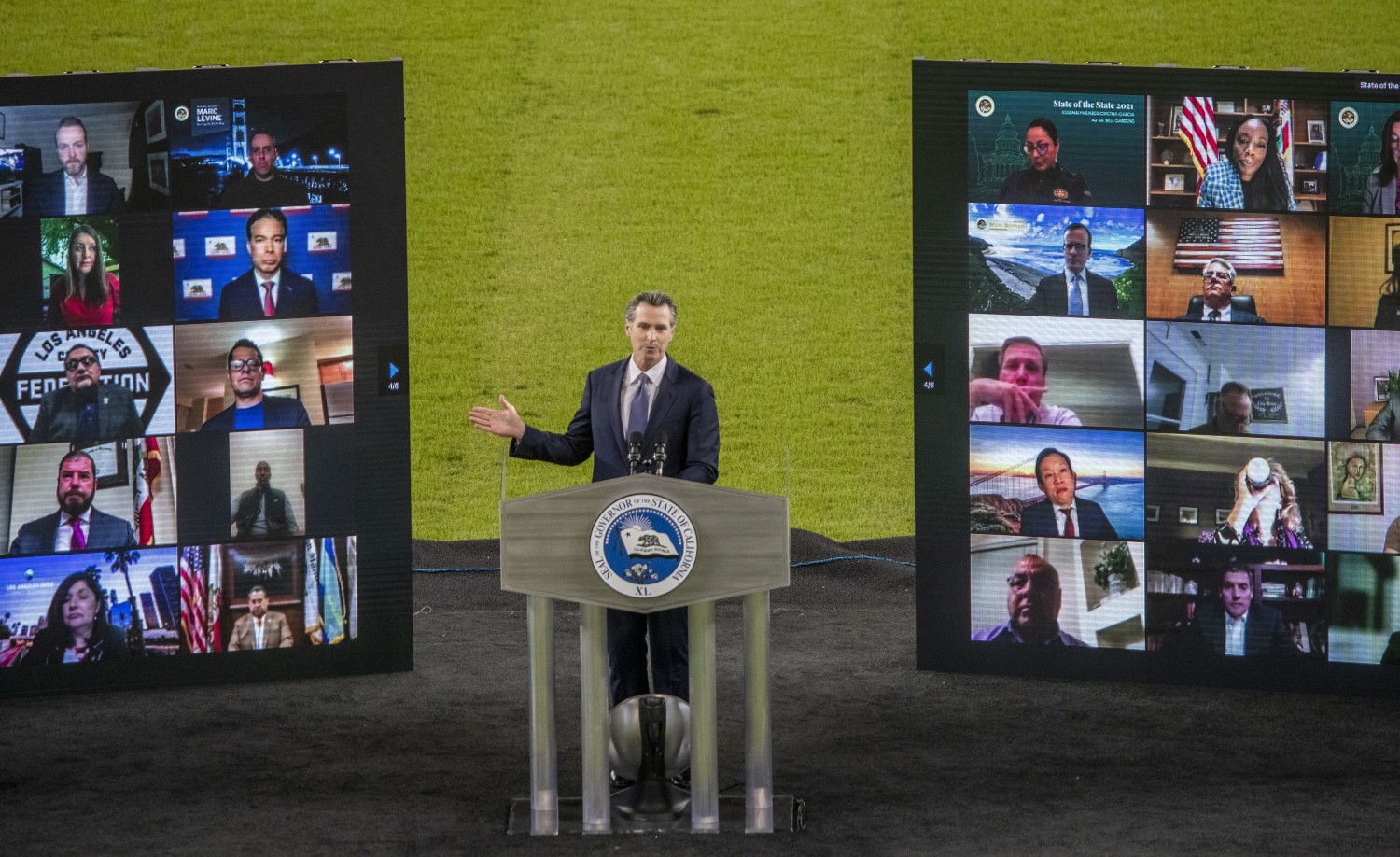 Whatever that was in Dodger Stadium on Tuesday night, it definitely was not a State of the State address.

The player was way out of position.

It doesn’t matter what Gov. Gavin Newsom and Democratic leaders thought or pretended.

The event would have been credible if it had been called what it was: the official kickoff of the governor’s campaign to beat the Republican-led effort to recall him. And it should have been delivered at a political rally or Democratic convention.

Or he could have legitimately called it a first anniversary report on California’s handling of the deadly COVID-19 pandemic. And detailed how we’re gradually moving toward recovery, medically and financially. Not quite “Happy Days Are Here Again,” but “Here Comes the Sun.”

Newsom’s highly orchestrated event, however, ended with the song featured in his 2018 campaign commercials: “California Stars.”

State of the State?

What if President Biden delivered a State of the Union address from Yankee Stadium in New York? No one in the stands. No “Madam Speaker, the president of the United States.” He’d be jeered across America louder than umpires before instant replay.

Yankee Stadium would make as much sense as Dodger Stadium.

Legislative leaders justifiably called off the normal State of the State trappings because they feared the Assembly chamber could become a superspreader of the coronavirus if a joint session of both houses was crammed into the historic hall. Fair enough.

But if that happened in the nation’s capital, my guess is the State of the Union would be held at an alternative D.C. site, such as the Kennedy Center or the Washington Wizards’ basketball arena.

The governor and his advisors decided that if the annual address wasn’t going to be held in the Capitol, he’d do it virtually — from Dodger Stadium.

The stadium is in the heart of the state’s largest TV market where more voters were certain to view his speech, Newsom theorized. He could feature the nurses and other healthcare workers injecting people at what has become a mass vaccination site. And the empty seats could symbolize the more than 54,000 Californians who have died of COVID-19.

“That’s almost the same number of empty seats behind me, marking a silent tribute to loved ones who live forever in our memories,” Newsom said, looking into the TV camera just off the warning track in deep center field.

“As someone who has written many speeches for many politicians,” Duran wrote, “I know you never want the boss speaking to an empty room, much less a stadium with 54,395 imaginary dead people.”

The whole show just did not connect with how it was billed.

Newsom was flanked by panels of faces in squares — healthcare workers? It wasn’t explained — that periodically were flashed on TV alongside him as he spoke. That surely distracted viewers from the governor.

And he was out of uniform for a baseball field, standing on green grass in a dark blue suit with white shirt and tie. That’s the appropriate outfit for a State of the State address to a joint legislative session. This event called for his favorite attire: jeans and a fleece jacket.

“The ‘State of the State’ gimmick was probably not necessary,” says Dan Schnur, a USC and UC Berkeley political science lecturer who was former Republican Gov. Pete Wilson’s spokesman.

“A speech on COVID will get on TV in Los Angeles no matter where a governor gives it. And he can’t afford to alienate the Legislature by snubbing it on what would be their moment in the spotlight.”

Democratic consultant Steve Maviglio, who was Gov. Gray Davis’ spokesman when he was recalled in 2003, called the event “overproduced and seemingly over-rehearsed.”

Before the speech, Maviglio, who is also a former legislative advisor, told me: “I’m a traditionalist. I think it cheapens the State of the State a bit.

“There are two audiences for a State of the State: the Legislature and the public. I don’t know how he takes care of the Legislature, whose relationship with him is pretty rocky. For legislators, it’s the highlight of the year, really.”

“It’s bad enough that it’s in the middle of March,” Maviglio added.

Before Newsom, governors always punctually delivered the annual address in January, outlining agendas for the year ahead. Newsom delayed his first two until February. Now he has dragged the third into pre-spring.

The conventional analysis is that Newsom waited until there was better news to report on COVID-19 — and timed the speech to coincide with when recall sponsors are ready to submit enough voter signatures to presumably qualify their effort for the ballot.

But I think the main cause of Newsom’s March delay was disorganization.

The speech itself was so-so.

For me, it was a little too much rah-rah happy talk for the still scary situation. You can’t speed voters into feeling joyful when people continue to die and businesses close.

You can read all about what Newsom said in The Times’ speech coverage.

What I’m saying is that whatever the virtual show might be called, it didn’t look real.