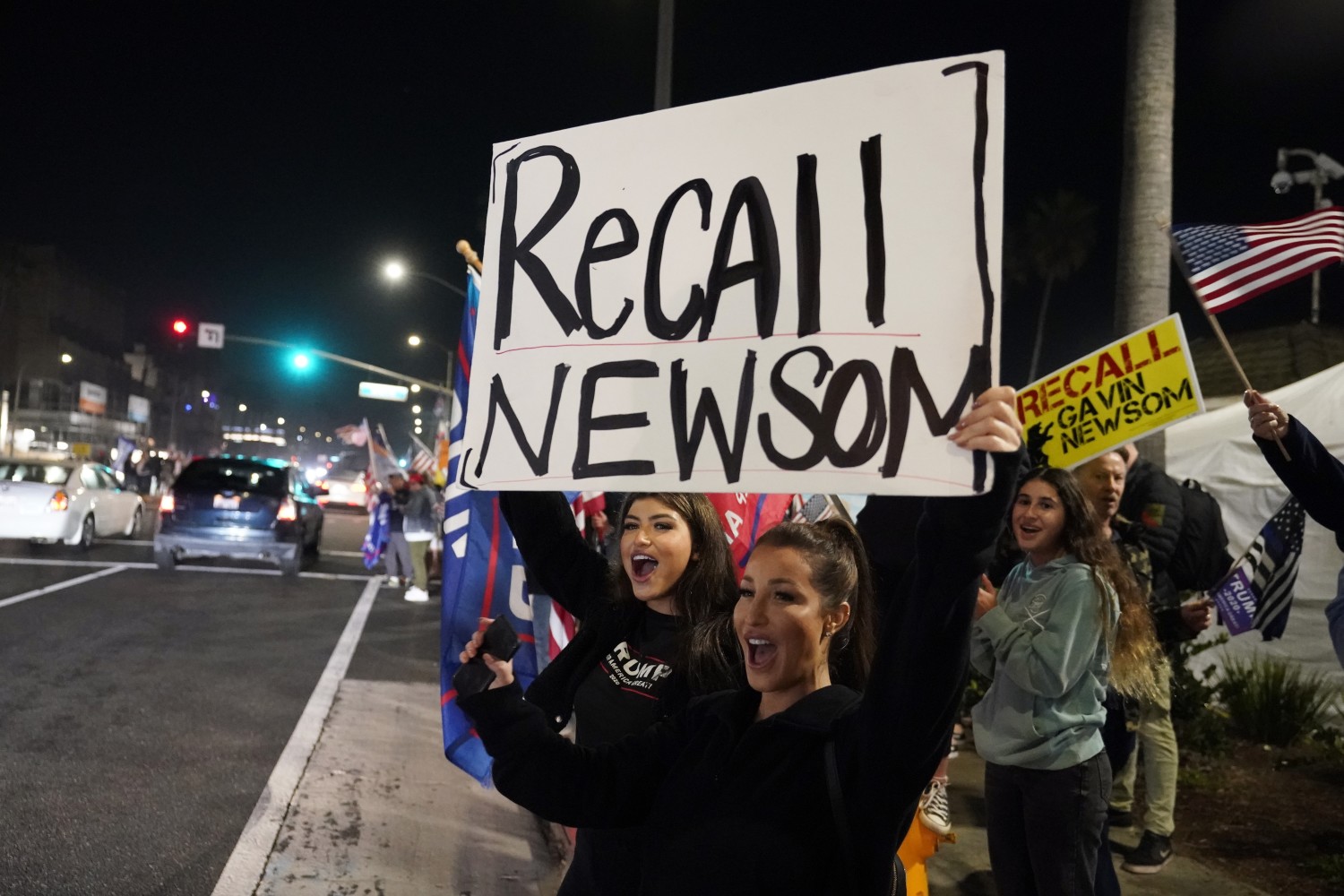 New major polls this week on Gov. Gavin Newsom show two things: The effort to recall him probably will make the ballot. And the odds are high that he’ll survive.

He’s likely to beat the recall attempt because Americans today are so polarized, they tend to vote knee-jerk with their parties. And there are nearly twice as many Democrats as Republicans in California.

“There’s probably going to be a recall election,” Mark Baldassare, president and pollster of the nonpartisan Public Policy Institute of California, told me.

“But the likelihood of the election succeeding is a different story. It’s a heavy lift. Most voters are Democrats.”

“In short,” Baldassare asserted in a written statement accompanying his new poll, “the math favors the effort to qualify for the ballot. But the base of Republicans (24%) or Trump voters (34%) falls well short of the majority needed to remove and replace the governor.”

It’s not a lock for Newsom, however. Voters will be grading his handling of the COVID-19 pandemic. Right now, even some Democratic voters are holding back their support.

Newsom “should be getting [voters]; he’s not,” says Mark DiCamillo, poll director at the nonpartisan UC Berkeley Institute of Governmental Studies. “They’re withholding judgment until they see what happens with COVID.

“It’s like a storm cloud over the governor’s head.”

The registered voters DiCamillo refers to are the 20% of Democrats and 28% of independents who said they’d be undecided if a recall election were held today.

Overall, however, the numbers favor Newsom — only 36% for the recall and 45% against it.

That’s because of polarization and the Democrats’ big advantage in numbers. Among Republicans, 84% are ready to vote for the recall, but 69% of Democrats are against it. Independents are also opposed, but more narrowly: 32% for, 40% against.

In a recall election, “the political wildcard” will be the status of the pandemic, Baldassare says.

In his poll, likely voters named the coronavirus as by far the most important issue the governor and Legislature should focus on. Homelessness — the No. 1 issue in a PPIC poll one year ago — was selected by only 6% of voters in the new survey.

“If there is a recall election, it’s going to be a referendum on how Newsom has handled the pandemic,” says USC and UC Berkeley political science professor Dan Schnur, a former Republican political operative. “That’s the only issue that’s going to matter.”

The PPIC and Berkeley polls conflict over how upset voters are with Newsom’s managing of the pandemic.

In the PPIC poll, voters are mixed: 50% approve and 47% disapprove.

But in the Berkeley survey, only 31% rate the governor’s pandemic efforts as good or excellent — a steep drop from 49% in September. Meanwhile, those giving him a poor grade rose from 28% to 43%.

To qualify for a ballot, the recall campaign must submit 1.5 million voter signatures by March 17. But about 2 million should be collected to ensure enough signatures are valid. By last weekend, the campaign said it had collected 1.3 million.

It’s not exactly clear when a recall election would be held. People have been assuming sometime in the fall. But one joker card is that Democrats could legally — under a relatively new law — delay it well into next year, when hopefully the pandemic will have almost run its course and be less of a hot issue.

“Theoretically, they could manipulate the timing to have the recall on the same ballot with the regular primary — when the governor is running for reelection,” says Tony Quinn, a longtime political analyst who is editor of the nonpartisan Target Book, which charts California election races.

Democrats fiddled with the law four years ago in an unsuccessful effort to save state Sen. Josh Newman (D-Fullerton) from a recall. Newman, representing a competitive district, committed the GOP-declared sin of voting for a big gas tax increase to finance highway construction.

In 2017, the Legislature and Gov. Jerry Brown extended the time between signature gathering and calling of the election by four months to make sure the voting coincided with the June 2018 primary. Newman lost anyway but won back the seat last November.

The most likely dates for a Newsom recall election would be in mid-to-late November, Quinn says. But the law allows the state to delay the recall voting for up to 180 days if it can be consolidated with a regularly scheduled election. Right now, the 2022 state primary is slated for June, but it could be moved up to March to help Newsom.

The primary was originally scheduled for March but delayed until June because new redistricting maps for congressional and legislative seats wouldn’t be ready. To protect the governor, Democrats could hold the primary for statewide races in March and still conduct district races in June.

But that would stink for many voters and might be too cynical a move even for Sacramento Democrats.

At first glance, the Berkeley and PPIC surveys seem to conflict on Newsom’s job approval ratings — but in reality, not so much.

The Berkeley poll showed 46% approval for the governor’s job performance, a steep drop from 64% in September. The PPIC survey founded 52% approval — not that big a difference statistically — and a huge decline from 64% in May.

In the PPIC poll, Newsom’s job rating is actually up slightly from a year ago, just before COVID-19 hit. But the recent trend is a downer.

Bottom line: There probably are enough Republicans in California to get the recall measure on the ballot, but not enough to pass it.