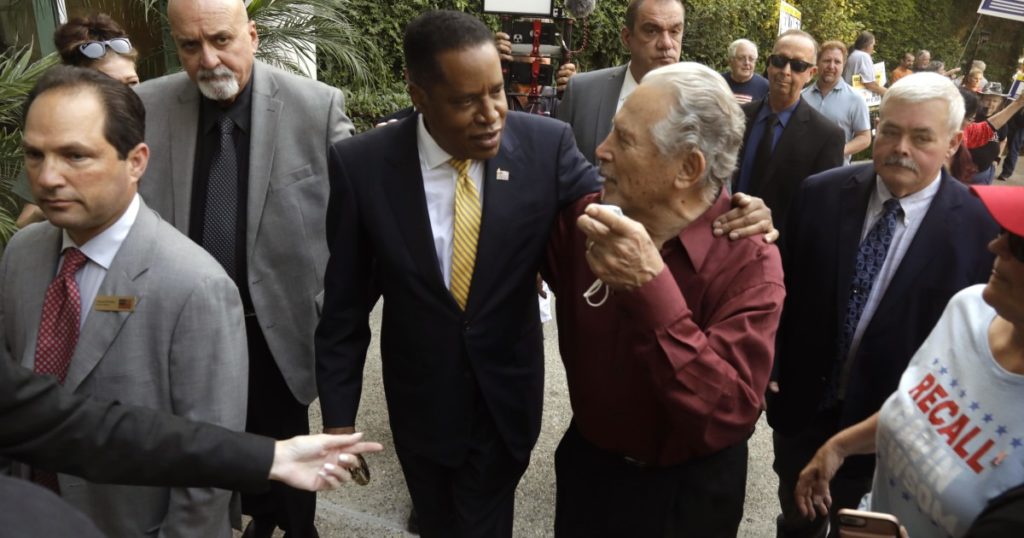 Gov. Gavin Newsom and radio talk host Larry Elder are fierce enemies in the recall election. But they’re also valued allies who rely on each other.

In fact, if you didn’t know better, you’d say they were close pals.

The more the liberal Democratic governor — and throw in the so-called “mainstream media” with him — attack the Republican conservative, the stronger he becomes among GOP voters.

Conversely, the more Newsom and the media scare Democrats about Elder, the more they’re motivated to vote against the recall and turning over the governor’s office to a Republican.

At least that’s the theory and it seems to be holding up.

Newsom has had his own scary problem heading into the election now underway: Polling showed Democratic voters were apathetic and didn’t seem to give a rip while Republicans were enthusiastic about recalling the governor and ending one-party rule in Sacramento.

Republicans have been threatening to overcome a nearly 2-to-1 registered voter deficit in this deep blue state by casting more ballots than Democrats. They still might. Balloting doesn’t end until Sept. 14. But early returns show Democrats voting in higher numbers than expected.

Maybe they’re just now waking up to the fact that there’s this weird special election happening. And maybe they’re being jarred by Newsom ringing the alarm about Elder while making him — along with Trumpism — the symbol of the entire Republican-led recall movement.

Meanwhile, Elder seems to be strengthening his front-runner position among the Republican candidates running to replace Newsom if he’s recalled. No major polls have been released since July, but several private and smaller surveys indicate Elder is leading.

Elder has taken a barrage of hits recently by Newsom and his political allies — and received significant negative news coverage — but that has probably helped him among conservative voters.

“The irony is that as Newsom elevates Elder for his own benefit, it enhances Elder’s notoriety with conservatives,” says Republican consultant Rob Stutzman. “Newsom did the same thing in 2018 in the June primary.”

Stutzman recalls when Republican businessman John Cox was running for governor — as he is again — and trying to land the No. 2 spot in the primary to qualify for the November general election runoff. Then-Lt. Gov. Newsom attacked Cox for his conservatism, which helped promote him to GOP voters.

The strategy worked for Newsom: Cox won the No. 2 slot over former Los Angeles Mayor Antonio Villaraigosa, a Democrat Newsom feared facing in November. Cox was an easy pushover for Newsom in the runoff.

Elder’s front-runner status “has been a big help to Newsom,” Stutzman says. “Newsom needed someone to run against and Elder fit the bill. Voters are going to see Elder as the likely top vote getter and that will lead them to vote ‘no’ on the recall.”

“Each day of coverage that Larry Elder gets is a good day for Gavin Newsom. Elder’s support on the replacement question motivates Newsom’s Democratic base to vote ‘no’ on the recall question.”

But often the political target’s supporters become even more committed to their candidate — as was the case with former President Trump’s followers and now with Elder’s, Schnur believes.

Elder has been bombarded lately with political attacks and negative commentary. The fodder includes a former fiancée who says he checked whether a revolver was loaded during a heated argument. He has made disparaging remarks about women and dismissed the significance of racial discrimination.

And there’s a long list of conservative positions on public policy — including opposition to abortion rights and the minimum wage — that don’t play well in socially liberal California.

When I talked with Elder, what especially irritated him was a quote from Melina Abdullah, cofounder of Black Lives Matter Los Angeles, calling him “a Black face on white supremacy.” The quote ran in a Times column by my colleague Erika D. Smith.

“I find it pretty disgusting … jaw dropping,” said Elder, who would be California’s first Black governor.

The broadcaster, who grew up in South Central L.A., has just cut a TV ad with him looking into the camera and asking: “Do I look like a white supremacist? I walked those hard streets….”

Many voters find all this confusing, probably because it’s only the second gubernatorial recall election in the state’s history. But it’s very simple. There are only two questions on the ballot.

First question: Should Newsom be recalled from office? Yes or no.

Second question: If he’s recalled, who should replace him? There are 46 candidates listed. Choose one. Or leave it blank. Whoever gets the most votes is the new governor if the recall passes.

Newsom has by far the most campaign money — more than $56 million so far.

But Elder has Newsom to help him with Republicans. And Newsom leans on Elder’s help to beat the recall.