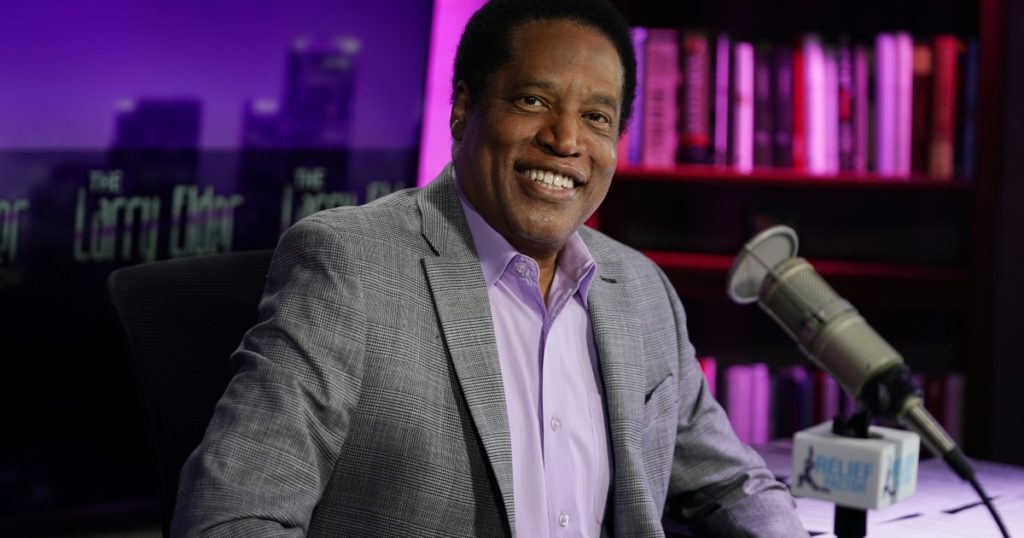 Conservative radio host Larry Elder is the latest Republican trying to recall Gov. Gavin Newsom and get elected to replace him. And why not?

It’ll only be a two-month campaign for Elder since he entered the arena late, just before the candidate filing deadline. Unlike some other major candidates, he won’t need to spend nearly a year on the tiresome and tedious campaign trail.

More important, there is a narrow, uphill path to victory for Elder. Don’t scoff.

Yes, the odds are heavily against him and the expectations are low. Newsom is the overwhelming favorite to retain his job based on polls and logic. Democratic voters outnumber Republicans in California by nearly 2 to 1. And no Republican has been elected to statewide office since 2006.

But there’s a conceivable scenario that works for Elder, 69, a Los Angeles native who has been a talk radio host since 1993. He would be California’s first Black governor.

There will be two questions on the Sept. 14 ballot: Should Newsom be recalled? Who should replace him?

For Newsom to be recalled, many Democrats would need to be so apathetic that they don’t bother to cast ballots. A significant number who did would have to vote for the recall. It won’t help the governor that his campaign team screwed up and didn’t get him identified on the ballot as a Democrat.

And Republicans — especially the most conservative — would need to be so excited about dumping Newsom that they turn out heavily.

Next, the expected large Republican field of several dozen would splinter the vote. Elder, with wide name ID and outspoken conservatism, would attract a plurality of Republican votes. He could win with a relatively small percentage of the total cast.

The more candidates the better in Elder’s view. Each candidate will bring out relatives, friends and supporters to vote for the recall. And it seems likely these candidates will take more votes from other contenders than from him because of his high ID.

Former San Diego Mayor Kevin Faulconer, 54, is the most qualified Republican candidate based on experience. He was twice elected to lead the state’s second-largest city and before that served eight years on the City Council in an increasingly Democratic community.

But Faulconer is a moderate who might not be conservative enough for many Republicans. And he was a 2020 supporter of former President Trump. That could turn off Democrats.

Faulconer’s main rival in the polls has been businessman John Cox, a perennial candidate best known for being trampled by Newsom in the 2018 gubernatorial election and hauling around a 1,000-lb. Kodiak bear this year to get attention.

Former Olympian and reality TV personality Caitlyn Jenner is the best-known Republican candidate. But she seems lost in the political world with little clue about the issues that confront a governor.

Another candidate, former U.S. Rep. Doug Ose from the Sacramento area, is little known with hardly any money. A recently entered Sacramento-area state assemblyman, Kevin Kiley, is barely known in his own district.

Elder is well-known among conservatives because his nationally syndicated, three-hour talk show is broadcast daily in L.A., San Francisco, San Diego, Sacramento and several smaller California cities. He’s heard in all 50 states in 200 markets, with a national audience of 1.5 million.

He also has 2.5 million followers on social media.

This is why having radio audiences in Utah, Texas and Florida — and being followed by millions on social media across the country — is important politically in California.

“These are potential donors,” says Lou Barnett, his campaign manager. “He has a national fundraising base.”

There are millions of American conservatives who believe that California’s liberal leadership is nuts and fear its ideology is spreading nationally.

Elder will need whatever bucks he can muster. Newsom will have all the campaign dollars he wants. There’s no limit on individual contributions to a recall target.

“There seems to be little appetite to recall the governor. The problem is, people are just not tuned in at all,” says Steve Smith, communications strategist for the California Labor Federation.

Smith means Democrats. And he bases his opinion on recent focus groups of undecided union members conducted by the federation.

“People have a lot of other things on their minds,” he says. “If there’s not a big turnout, things could get interesting.

“Clearly, in the Republican Party they’re enthusiastic. If they all turn out, things can get severe.”

But Democratic consultant Garry South, strategist for former Gov. Gray Davis, who was recalled in 2003, dismisses talk of apathy.

Elder has never run for office. But he has been studying and talking about public policy for 28 years. I asked him why he had never before sought an office where he could change policies.

“I always thought politics was an ugly, sordid business I didn’t want anything to do with,” he answered.

So, why run now? He didn’t like the governor’s handling of the pandemic — especially the school closings — and voiced a bunch of other typical anti-Newsom criticisms.

“I said, ‘Hell no, California is ungovernable,’” Elder recalls. “Democrats dominate the Assembly and Senate.”

And, he added, “I’m not in favor, in general, of recall elections.”

But he decided “Gavin Newsom has to go” and he’d have a “bully pulpit” to rouse public demand for change.

Newsom is a heavy favorite — but not a cinch.