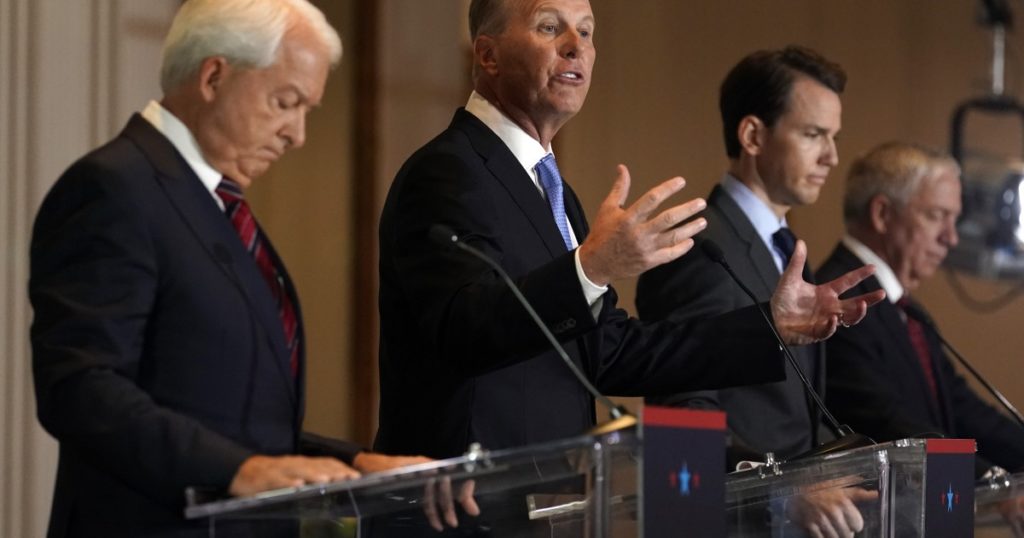 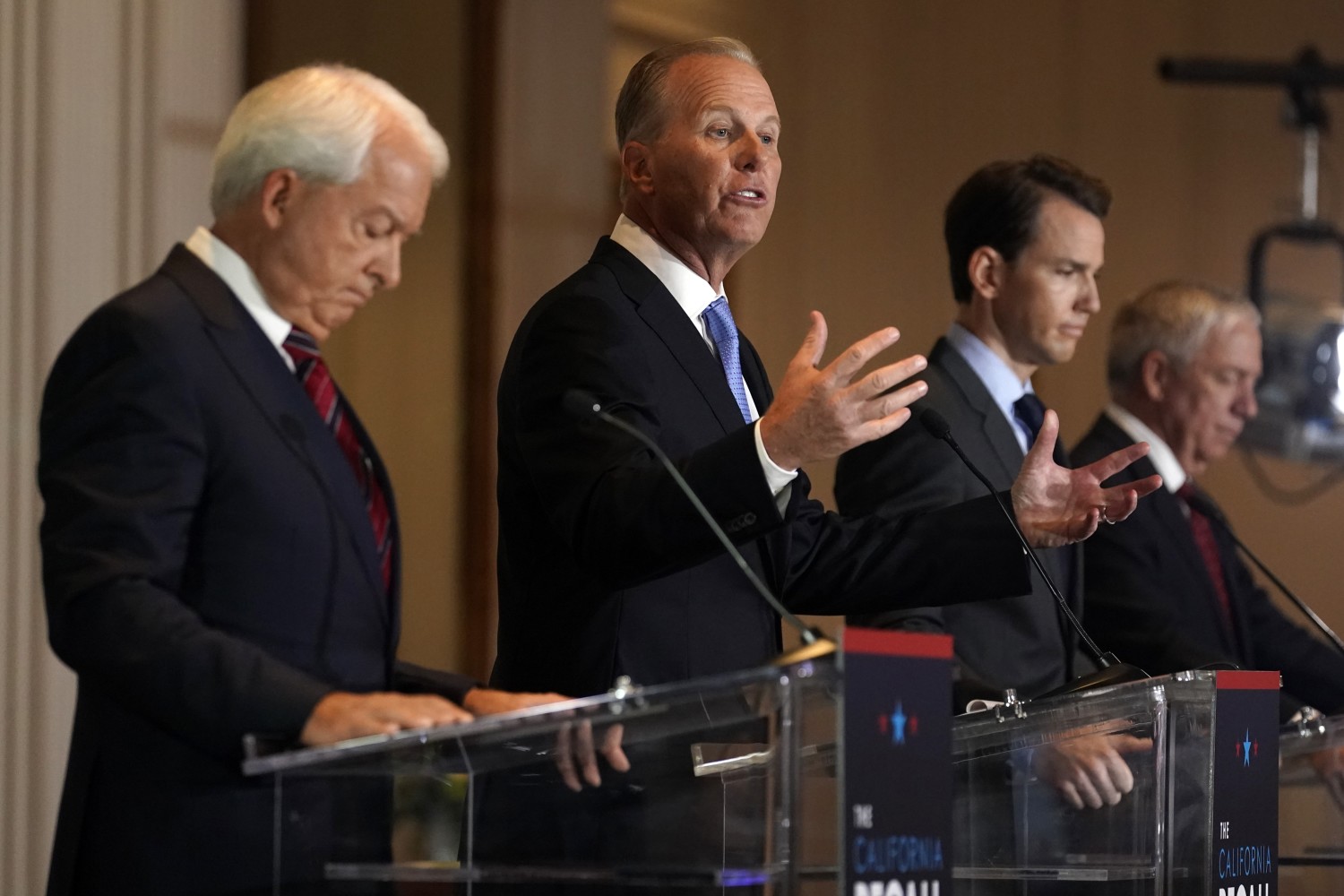 Former San Diego Mayor Kevin Faulconer looked and sounded like he could be an OK Republican governor. He could handle the job.

The three other Republican candidates competing in last week’s debate among gubernatorial wannabes also made some good policy points.

Two little-known Sacramento area contenders — former Rep. Doug Ose and Assemblyman Kevin Kiley — performed above most experts’ expectations, I suspect. Yes, it was a low bar. But both were articulate, to the point and clearly knowledgeable.

None of the candidates put on a clown show. Rancho Santa Fe businessman John Cox left his attention-grabbing campaign prop, a live Kodiak bear, at home.

Of course, if you’re a true-blue Democrat who abhors the prospect of a Republican capturing the California governor’s office — even if you’re not wild about Gov. Gavin Newsom — there’s no GOP contender who will please you.

Democratic voters outnumber Republicans nearly 2 to 1 in California. And polls show they overwhelmingly oppose the GOP-led attempt to recall Newsom.

But that matters only if Democrats actually vote. And many don’t give a rip about the Sept. 14 recall election, polls indicate. Republicans, meanwhile, are excited about the prospect of ousting a liberal Democratic governor and ending one-party rule in Sacramento.

“Turnout is likely to be far higher among Republicans than Democrats and No Party Preference voters,” reports Mark DiCamillo, poll director at the UC Berkeley Institute of Governmental Studies.

That’s why a recent IGS poll found the contest to be surprisingly close among likely voters: 47% for the recall and 50% against, a statistical dead heat.

Newsom is still favored to win. But it’s no longer inconceivable that the Democrat could be dumped and a Republican would wind up as governor. That’s what made the low-profile GOP debate important.

The only loser in the face-off held at the Richard Nixon Presidential Library and Museum in Yorba Linda was the replacement candidate leading in the polls: conservative Los Angeles-based radio talk show host Larry Elder. He refused to debate.

One of the first rules of politics is to show up.

And to win a competitive contest, you’ve got to compete — including in debates.

Elder’s excuse was that he wants to debate only Newsom — not participate in “a circular firing squad” in which Republicans wound one another.

But virtually all bullets were fired at Newsom. The only significant shot at a Republican was Ose calling Faulconer “a plastic man” for his homelessness policy in San Diego.

Faulconer said he reduced street encampments by double digits and the city found shelter and treatment for many. Ose claimed many homeless people merely moved into nearby communities.

Had Elder been onstage, he probably would have taken guff about his political inexperience. But celebrity governors Ronald Reagan and Arnold Schwarzenegger deftly handled such attacks: They were citizen politicians running against the corrupt political establishment.

Elder missed a golden opportunity to distinguish himself from the other Republicans — especially the moderate Faulconer — and rally his conservative base, not only to his candidacy but to turn out en masse for the recall.

Elder may have lacked confidence in his knowledge of state issues — at least the details — compared with the four who debated. But details are overrated in campaign debates. Voters mostly just want to size up the candidate’s demeanor and positions.

Newsom also could have benefited from participating in the debate. He was invited but didn’t respond.

Joining the debate would have violated conventional wisdom that says a political target doesn’t voluntarily stand before a firing squad while also drawing more public attention to his opponents.

But Newsom could have touted his record, which the public seems confused about, and slapped down some of his opponents’ hyperbole and falsehoods. One example: Faulconer’s claim that Newsom supports the “defund the police movement.” He doesn’t.

The most insensitive comment was uttered by Cox. After asserting that people once infected by COVID-19 have antibodies and don’t need to be vaccinated, he added:

“This disease is an awful one. I had it very early on…. But it’s 99.9% survivable by people who are in decent health who aren’t elderly.”

Well, whoopee-do. What about the rest of us who aren’t in decent health or are elderly?

Everybody needs to get the shot.

But Cox also had one of the wiser observations: “Climate change may or may not be causing wildfires, but we’ve got to deal with it.”

I’m sick of Newsom persistently blaming wildfires on climate change — another version of “not on my shift.” Inept forest management by the state and federal governments also is a big culprit. They can deal with that a lot faster than reversing climate change.

Kiley had the most refreshing, good government promise. Asked whom he’d appoint to replace 88-year-old Democratic Sen. Dianne Feinstein if she leaves office before her term expires in 2024, the legislator replied:

“I wouldn’t make an appointment at all. I’d leave it up to the voters.”

Of course, it’s highly likely that would lead to the election of a Democrat — and probably Kiley’s recall by fellow Republicans.

Faulconer focused on denouncing Newsom and wisely avoided making grandiose commitments. For example, he wouldn’t be pressed into promising to prevent schools from mandating student masks. “I’ll look into doing it,” he said.

Faulconer quickly pivoted when asked whether he still supported former President Trump after voting for him last year.

“What happened on Jan. 6 was abhorrent to our country,” Faulconer replied, referring to the deadly Capitol insurrection inspired by Trump.

He immediately added: “What Gavin Newsom wants to do is to make this all about Donald Trump.”

Pressed whether he would welcome Trump’s endorsement, Faulconer had a Reaganesque answer:

“I would proudly take the support of any Republican or Democrat who wants to get rid of Gavin Newsom and make California a better state.”