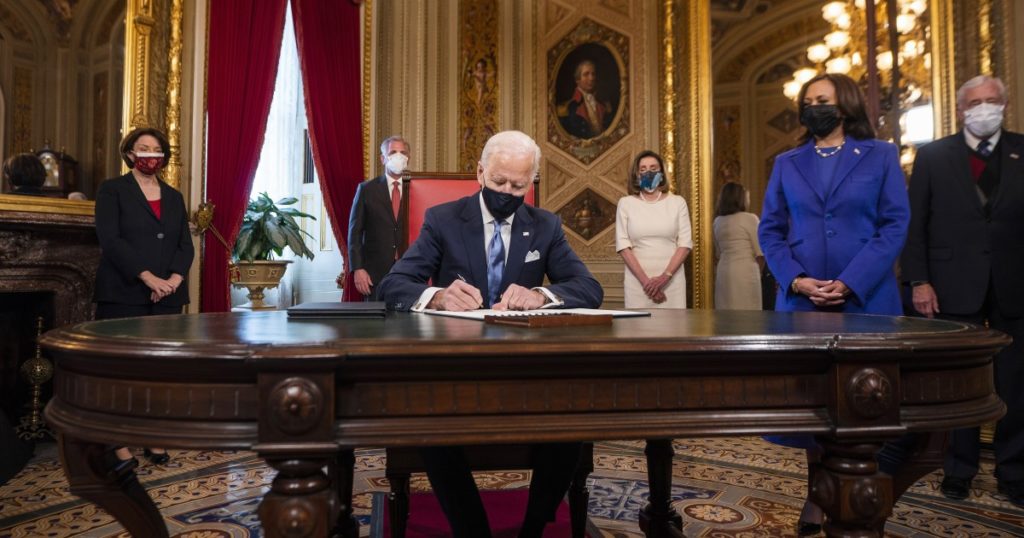 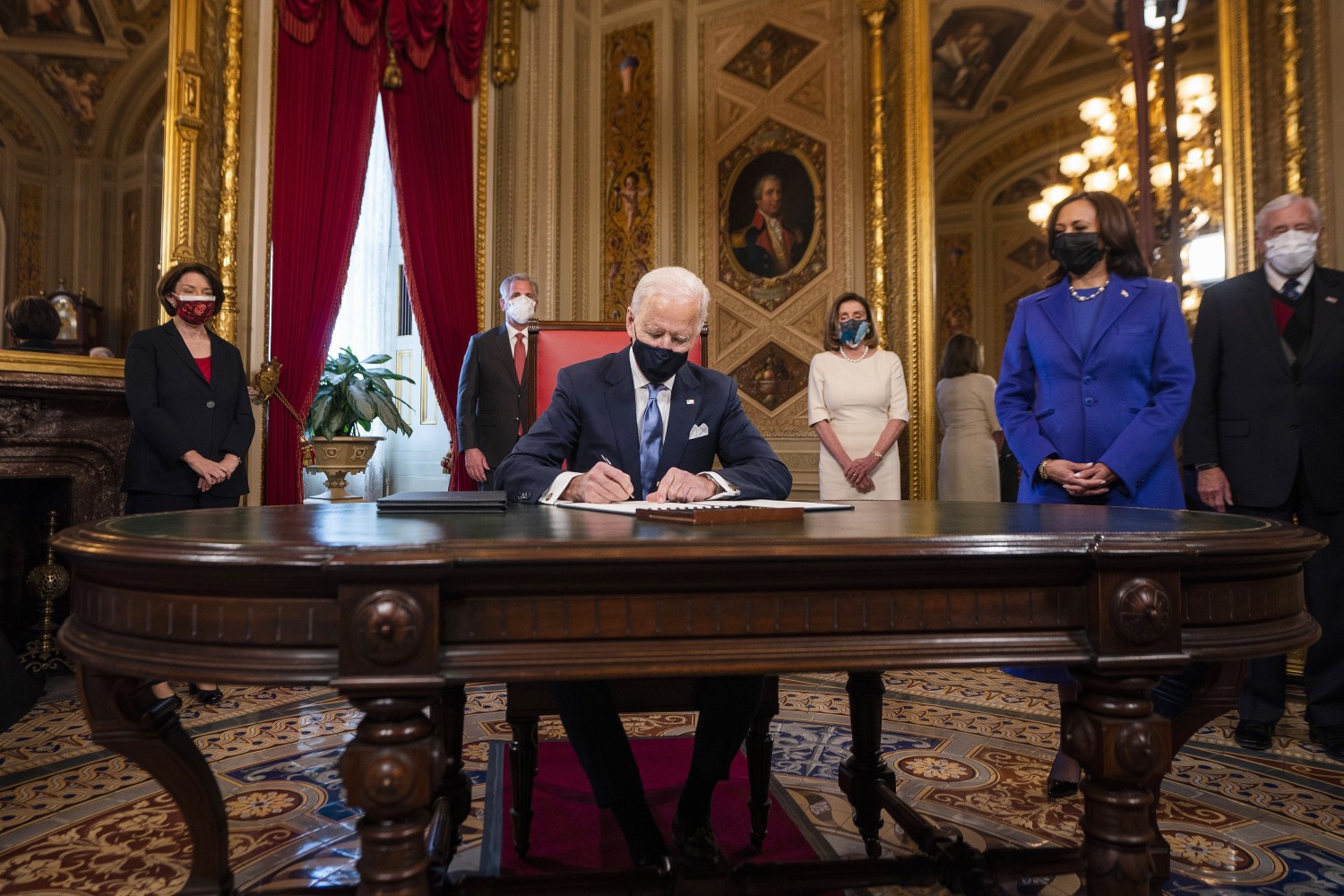 Forty years ago, I watched awestruck as Ronald Reagan moved into the White House amid pageantry that was 180 degrees different from Joe Biden’s subdued arrival.

California’s former governor, an upbeat dreamer, always envisioned America as a “shining city on a hill.” Biden was inaugurated in a city that depressingly resembled an armed camp — as did California’s state Capitol and statehouses around the country on Wednesday.

That’s because the departing president had recklessly whipped up supporters into a deadly mob that stormed and ransacked the U.S. Capitol, leaving the nation shaken.

Jimmy Carter, the president whom Reagan defeated, had always promised Americans, “I will never lie to you.” Donald Trump, ousted by Biden, was a serial liar. First, he lied that “illegal” voting cost him a popular-vote victory in 2016. Finally, he lied about “fraudulent” state elections “stealing” the presidency from him in 2020.

It probably was why Biden felt compelled in his inaugural address to pledge, “I will always level with you.”

Reagan was honored with the grand ritual accorded virtually every new president throughout history. He and his wife, Nancy, were driven through the northwest gate of the White House complex and up the curving driveway to the north portico, where the departing president and first lady waited to cordially greet them. Then they very civilly rode together to the inaugural ceremony.

It’s a proud tradition that symbolizes America’s peaceful transfer of power. Until Wednesday.

Poor loser Trump skipped town early without saying hello or goodbye — or even conceding he’d honestly lost the election. The man who promised to “make America great again” — but divided and degraded it — wasn’t civil enough to even attend his successor’s swearing-in, snubbing a long presidential custom.

It was the pre-ceremony linkup at the White House that especially struck me 40 years ago — probably because I knew most of the arriving Californians. And also because it was my first day as a full-time White House correspondent for The Times.

Standing on the snow-covered lawn between the West Wing and the driveway, I watched one Reagan staffer I’d closely known for many years spring from the limousine motorcade, wide-eyed and grinning broadly.

Mike Deaver grew up in Bakersfield with “lower-middle class” roots, he told me. His father was an oil distributor. The family “scrimped and studied price tags.” But it could afford piano lessons. He learned lounge music and paid his way through San Jose State performing at a piano bar. We lived across the hall from each other in a fraternity.

Now, the kid from Bakersfield was gazing at the White House, about to become one of the president’s “troika” of most powerful advisors — and already the Reagans’ most trusted.

“My heart was in my throat,” Deaver told me years later. “This was a pretty big pond and treacherous waters.”

Unfortunately, there wasn’t a ceremonial passing of the torch in the driveway for Biden and his top aides. No limousine motorcade.

After a rather depressing “parade” along fenced-off empty sidewalks without the usual cheering citizens, Biden and his family walked through the northwest gate and up the driveway to the residence. No one was there to greet them.

A little bit of Americana was lost.

But Biden made the most of it, emphasizing in his speech to a relatively tiny crowd — limited by COVID-19 and security concerns — that “democracy has prevailed,” despite the Trump-incited violent mob that tried to stop Congress’ certification of electoral votes.

“Stop the shouting and lower the temperature,” the new president pleaded, repeatedly stressing the need to unite the nation.

“We must end this uncivil war that pits red against blue, rural versus urban, conservative versus liberal. We can do this if we open our souls instead of hardening our hearts. If we show a little tolerance and humility and if we’re willing to stand in the other person’s shoes, as my mom would say.”

That goes especially for the pandemic, he said.

“We’re entering what may be the toughest and deadliest period of the virus. We must set aside politics and finally face this pandemic as one nation. One nation.”

Ken Khachigian, a Republican strategist who grew up on a Tulare grape farm, wrote Reagan’s 1981 inaugural address. Khachigian gave Biden’s speech only a C-plus, partly, he said, because the Democrat “didn’t really reach out” to Trump’s disaffected voters.

“He just said, ‘I’ll be the president of all the people,’” Khachigian asserted. “He didn’t actually try to voice their concerns, didn’t say anything about their feeling removed from the government.”

“It was not a landslide election — 74 million people voted for Trump,” Khachigian continued. “Biden didn’t roll in with a massive mandate like Reagan. … He’s not entering into a nice quiet environment.”

In deep-blue California, Trump was clobbered in a landslide. But 6 million people still voted for him.

These are some things Biden could do to help Californians:

Get everyone vaccinated. Help business reopen. Eliminate the Trump-Republican $10,000 cap on state and local tax deductions. Aggressively clean up national forests to remove wildfire fuel. Reinvest big in the pokey high-speed rail project. Pour money into getting kids back in school. But don’t dare raise taxes on the middle class.

Reagan was underrated — by Democrats at least — and turned out to be a pretty effective president. He and Soviet leader Mikhail Gorbachev ended the Cold War. Likewise, Biden is largely underrated — by voters in both parties.

The former vice president and senator may be just what we need right now in the Oval Office: Invaluably experienced, relatively moderate — and basically truthful.