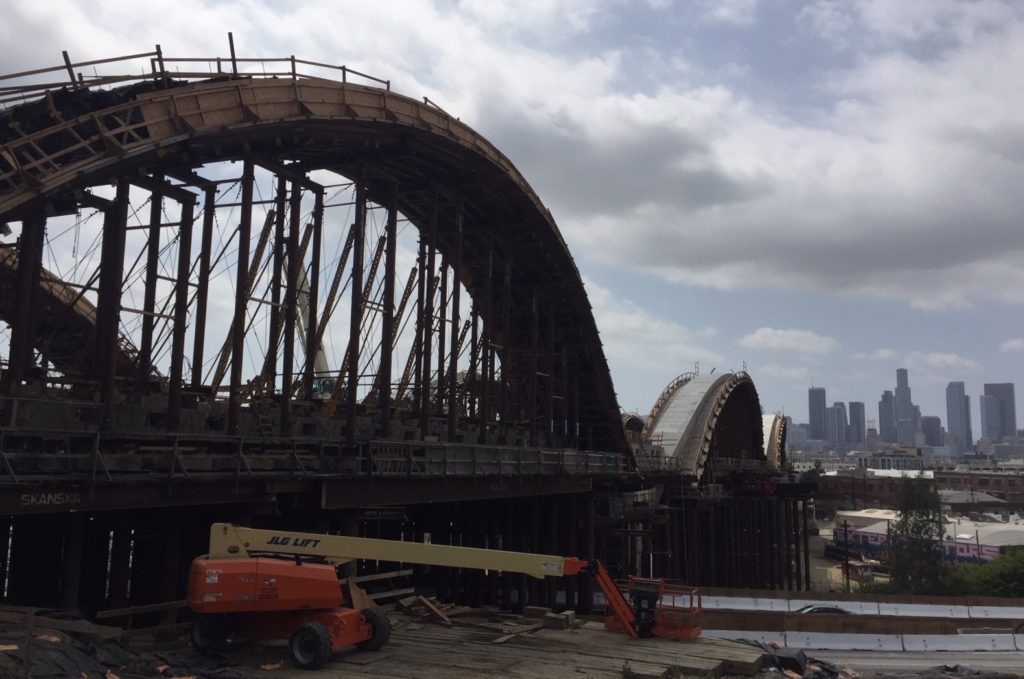 Last weekend, in order to proceed with construction of the Sixth Street Viaduct, the city of Los Angeles had planned a 55-hour closure of the 101 Freeway through Boyle Heights and downtown Los Angeles. Specifically, the city was pouring concrete for two 40-foot high arches that tower above the freeway. By Sunday morning, the city Bureau of Engineering announced that pouring the new arches had gone so smoothly that the freeway was reopened 20 hours early.

In the video below, City Engineer Gary Lee Moore expresses his enthusiasm for the $588 million nearly mile-long viaduct, now expected to open in Summer of 2022.

Department of Public Works spokesperson Mary Nemick reports that the city has now completed six of the 20 monumental arches on the Sixth Street Viaduct. Of those 20, two pair are 60-feet tall, one pair (over the 101 Freeway) are 40-feet tall, and seven pair are 30-feet tall.

The Sixth Street Viaduct includes ten sets of LED-lit, color-changeable arches that will make up “The Ribbon of Light” design of the bridge. The arches are 10 feet wide, with a typical arch span of 300 feet. Each arch takes 260 cubic yards of concrete to construct or about 65 trucks of concrete. In order to keep the concrete cool enough, it is delivered to the site, then injected with liquid nitrogen to keep it close to ambient temperature. This reduces the potential for concrete cracking.

We will continue to pour arches in the coming months and also begin to remove the scaffolding/falsework below the bridge, though I don’t have a timeframe on that.

Streetsblog visited the site Sunday afternoon, hoping to catch the tail end of the weekend work, only to find work had already been completed. Below are photos of the under-construction bridge.

Compare these latest photos to Streetsblog’s May 2018 and October 2020 viaduct construction posts – and find earlier SBLA coverage of the project.