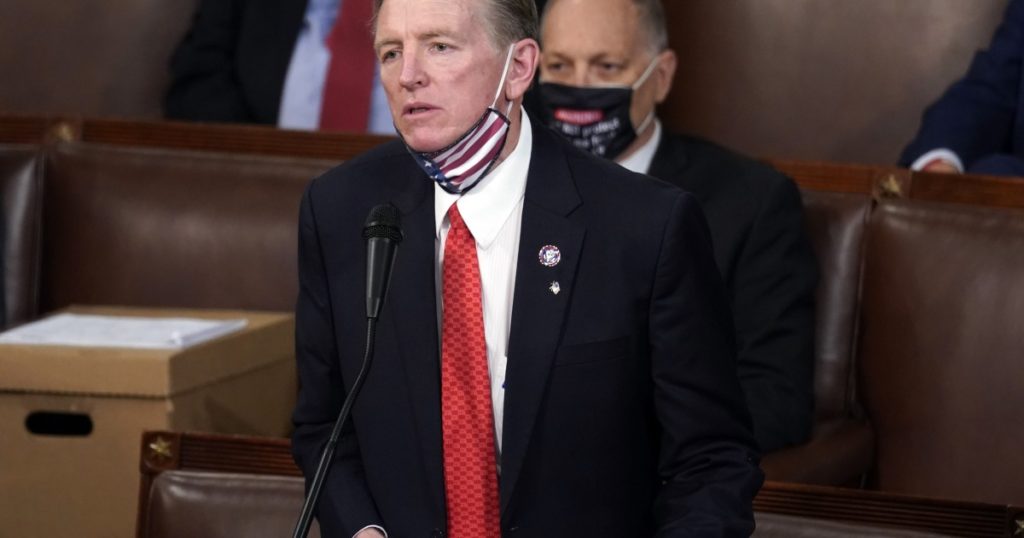 Growing up in small-town Wyoming, the Gosar kids never lacked for companionship. There were 10 of them — seven boys, three girls — and they were loving and close.

“We always had a baseball game or a football game or something to do because we always had our friends to do it with right at home,” recalled Tim Gosar, one of the middle boys.

The youngest of the clan, Jennifer Gosar, bears a striking resemblance to the oldest, Paul, whom she remembered as “kind of this golden, sweet big brother.”

It’s been years, though, since either sibling has spoken with Paul Gosar, now a Republican congressman from Arizona. They use words like racist, corrupt, ignorant and hateful to describe him.

“He is, in my opinion, about as despicable a politician as I have ever seen,” said Dave Gosar, another of his brothers.

The poison-filled politics of the past many years have cleaved the country in deep and profound ways. There are vast and stark differences among lawmakers over any number of policy issues. There have been, as well, countless small ruptures, less visible but more personal and agonizing: friends who are no longer friends, relatives who no longer speak, parents who have become estranged from their children.

What makes the Gosars extraordinary is their brother’s position in Congress and the public steps his kin have taken to condemn his actions and show their contempt. In 2018, six of Gosars’ siblings appeared in campaign ads urging their brother’s defeat. (He was overwhelmingly reelected in his deeply conservative district.)

Now, after watching Gosar spread lies that helped fuel January’s Capitol insurrection, several of them are trying to get him kicked out of office. “We feel it’s our moral obligation,” Dave said. “We have to come out, we have to do this.”

It has been wrenching nonetheless.

The Gosars were raised Catholic and Republican in southwestern Wyoming, the kind of place with more land and sky than buildings or people. Their father, an oil field geologist, and their stay-at-home mom were both active in the GOP, but talk around the dinner table, mainly about current events, was never dogmatic.

“We used to have lively discussions,” said Dave, an attorney in Jackson, Wyo. “It was a lot of fun. A lot of teasing, joking.”

Paul’s siblings were surprised when their oldest brother announced in 2009 he was running for Congress. He had no political background — Gosar was a dentist in Flagstaff, Ariz. — but he emerged as a favorite of the tea party movement, winning the endorsement of right-wing luminaries including Sarah Palin and Joe Arpaio, the Latino-harassing sheriff of Maricopa County. Gosar unseated a Democratic incumbent as part of the 2010 Republican tidal wave.

His siblings were even more surprised by some of the beliefs he began to espouse. He embraced the racist fiction that Barack Obama was born in Africa and ineligible to be president. He disparaged Muslim immigrants and consorted with anti-government militiamen.

He snubbed the pope, skipping his historic speech to Congress, because of the pontiffs’ stand on climate change, which the congressman denies. He suggested financier George Soros, a Holocaust survivor, organized a violent white supremacist rally in Charlottesville.

“He started at an extreme place, he started at a bigoted place… and he’s gone even further into that,” Jennifer said.

Many in the family quit the Republican Party a long time ago. For Jennifer, 47, it happened in high school, as she became more environmentally conscious. Tim, 57, drifted away in college. Dave, 59, grew estranged during the Reagan years.

But in a lengthy conversation, tethered via Zoom, the three emphasized the falling out was not a matter of political or philosophical disagreement but revulsion over racism, anti-Semitism and other reprehensible words and deeds.

“What are you supposed to do?” said Tim, a private investigator in Fort Collins, Colo. “Give family a pass on hate?”

Over the years there were attempted interventions.

Jennifer, a medical interpreter in Seattle, wrote a research paper on immigration and shared it with the congressman. There were texts and emails. There were raised-voice discussions, including one at a family wedding that turned ugly. The decision to go public and star in advertisements supporting their brother’s 2018 reelection opponent came gradually, but all three said it seemed inevitable.

“I felt like a liar, to be honest with you,” said Jennifer, choking up as she spoke of her work translating for refugees and other immigrants wracked by health issues or poverty. “Because they were trusting me and there was this man out there, who I knew looks very much like me, saying the most hateful, despicable, dehumanizing [things].”

The ads didn’t move the needle a whole lot in Arizona. There was worldwide publicity, though, along with yucks about awkward holiday gatherings. On Twitter the congressman called his brothers and sisters a bunch of liberal Trump haters who “put political ideology before family. Stalin would be proud.” He did not respond to a request for comment.

Their mother sided with the congressman, telling the New York Times, “I share the same philosophy and policies that Paul does.”

That widened the breach. Dave likens his parents to brainwashed disciples of a cult.

“They just sit there and marinate in Fox News,” he said, “and that’s what they believe.”

Tensions also grew between those family members who spoke out against Paul and those who stayed silent.

Still, after the Jan. 6 attack on the Capitol, David, Tim and Jennifer spoke out again, urging lawmakers to expel their brother from Congress for his actions leading up to the insurrection.

Rep. Gosar had been among the loudest voices promoting the falsehood that November’s election was stolen from President Trump. He was, according to one organizer, among those who helped plan the rally that ended in the deadly assault. As it happened, Gosar was speaking on the House floor, attempting to thwart routine certification of Joe Biden’s victory, when lawmakers were hustled away from the rampaging pro-Trump mob.

It’s extremely unlikely Gosar will be punished by his peers, barring some legal action. Still, his siblings remain determined to drive him from office.

“Paul has no character, no integrity, no honor,” Tim said, “and is absolutely close as you get to a pathological liar.”

“The only way I can care for my brother,” Jennifer said, “is to hold him accountable.”

Blood, the saying goes, is thicker than water. But sometimes principle matters more.