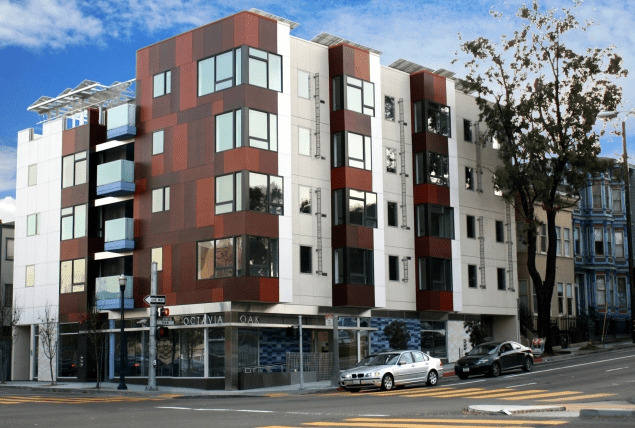 At 4 p.m. on Tuesday, the Berkeley City Council is scheduled to take up the topic of parking regulations. Reforms recommended by the Planning Commission would remove minimum parking requirements for all residential land uses, with the exception of some lots located on roadways less than 26 feet wide in hillside areas. The Planning Commission also recommends adopting maximum parking limits and instituting transportation demand management requirements for residential land uses.

Councilmember Sophie Hahn has proposed maintaining the current minimum parking requirements throughout the Hillside Overlay zones, which would mean continuing to force the inclusion of parking in residential buildings adjacent to UC Berkeley, where residents (mostly students) are least likely to own a car. She also recommends continuing to require disabled parking spaces in larger residential buildings.

What’s the best approach? To figure this out, consider what minimum parking laws do, who pays the cost of complying with them, and how they affect people with disabilities.

Minimum parking regulations specify the minimum number of parking spaces that must be provided for every land use. The cost of complying with them is high. In the Bay Area, the cost of building, operating, and maintaining a parking garage typically exceeds $300 per month per parking space, every year, for the expected 35-year useful life of the structure.

Builders pay for this parking, but they pass its cost along in the form of higher rents. Research by Santa Clara University’s C.J. Gabbe and UCLA’s Gregory Pierce found that, nationwide, bundling the cost of a garage space into rents adds about 17 percent to a unit’s rent.

“Minimum parking requirements create a major equity problem for carless households,” the study authors write. The regulations force carless – generally low-income – people to pay higher rents for parking they do not need and cannot use.

Minimum parking requirements act like a matching grant program – limited to those who can find a way to match the grant. The high cost of complying with them raises rents for everyone, but only those who are wealthy enough to purchase, insure, refuel, and maintain an automobile benefit from them.

Additionally, one must be able to pass a driver’s license exam. For millions of Americans with a disability, these two hurdles are too much. About 13 percent of American adults report that they have trouble seeing even when wearing glasses or contact lenses. Many more Americans cannot drive due to strokes, developmental disabilities, or other impairments. Others cannot afford a car.

Minimum parking regulations often raise rents for disabled people who cannot drive, under the mistaken belief that this creates “free” parking for everyone – but mostly for able-bodied people with higher incomes.

In the worst cases, rent increases caused by minimum parking regulations lead to homelessness. The U.S. Department of Housing and Urban Development’s 2008 Annual Homeless Assessment Report found that about 43 percent of people in homeless shelters had a disability of some kind. Too often, Americans with disabilities end up sleeping in doorways, under freeways, or in unheated garages.

Cities across America have now recognized the unintended harm caused by minimum parking regulations and have adopted reforms to reverse the damage. Two key reforms are:

Removing parking minimums benefits people with disabilities in multiple ways. For some, it can make homeownership possible. UC Berkeley researchers Wenyu Jia and Martin Wachs found that in San Francisco, twenty percent more households could qualify for loans on condominiums that don’t include parking.

Others can convert unused garages into homes. The average rent for a studio apartment in Berkeley is about $1800 per month. A Berkeley homeowner with failing eyesight or some other disability that makes owning a car pointless could use a home equity loan to convert their garage into an apartment. That could pay for a lot of taxi rides, while providing a modest home to someone who needs one.

Removing mandatory requirements to build parking doesn’t mean that new developments will have no parking. It just makes parking an optional amenity, instead of a required purchase. That gives everyone the option to save money by owning fewer cars.

It also opens up new options for providing parking. In San Francisco, new car-free homes often come with the option to lease surplus parking in nearby buildings. If Berkeley removes minimum parking laws, the same phenomenon is likely to emerge there.

A recent study commissioned by the City of Berkeley found that minimum parking regulations have created so much surplus parking that at the average Berkeley apartment building, 45 percent of the off-street parking supply sits vacant during the hours when it is most in demand. At below-market-rate apartment buildings, 58 percent of the off-street parking supply is vacant – unused and unneeded – at peak hours. Removing minimum parking regulations will allow this existing but wasted space be put to use, or converted to a better use.

Octavia Court, for example, provides fifteen affordable homes for people with developmental disabilities and their families. Making the project a car-free building served three purposes: it reduced the cost per home, allowing the city to build more homes with its limited funds; it maximized the number of apartments that could fit on the constrained site; and it avoided spending money on a costly amenity – parking – that its developmentally-disabled residents will never be able to use. San Francisco has realized a simple truth: when thousands of Americans with disabilities are living on the street, scarce affordable housing dollars shouldn’t be used to subsidize cars.

Some Americans – including some of my family members – have a disability and do drive. It’s important to meet their needs, by allowing new apartment buildings to include parking for those who want it. But people who cannot afford or choose not to own a car should never have to pay for a parking space they can not use.

And blind people shouldn’t have to pay for parking spaces that they don’t need and can’t use.