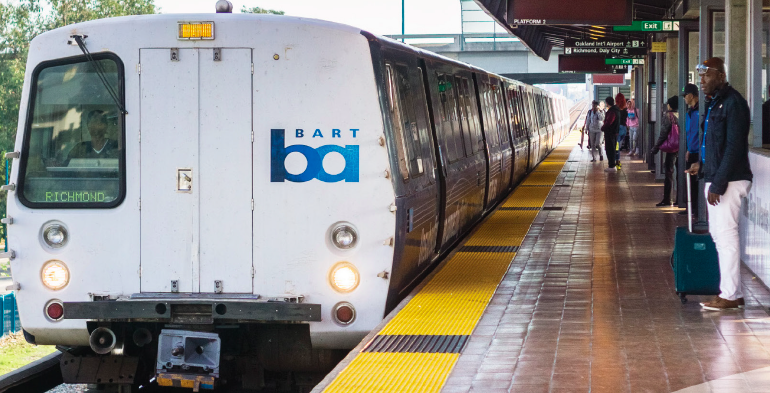 The California State Transportation Agency (CalSTA) recently released a draft version of a plan to help guide the state’s transportation investments towards sustainable, climate-supportive projects. The Climate Action Plan for Transportation Infrastructure, or CAPTI, focuses on “discretionary funding” – that is, state transportation money that is not assigned by statute or regulation for a specific purpose.

CAPTI addresses the urgent question: How can California best use transportation investments to help reduce emissions? Tailpipe emissions account for roughly forty percent of all emissions in the state, and even though there was a temporary reprieve during the shelter-at-home orders, they show every sign of rising quickly to former levels.

At the recent California Transportation Commission meeting, representatives of labor and business groups pushed back against some of CAPTI’s policy suggestions. Commissioner Bob Alvarado several times spoke of the need to keep “promises” made to voters on what S.B. 1 – gas tax – funding would be used for.

“There seems to be a notion that CAPTI will shift transportation funds to non-transportation projects,” said CalSTA Secretary David Kim in a recent interview with Streetsblog. “That is not the case; there is no suggestion that transportation money would be used for anything other than transportation. In addition, as we’ve said repeatedly: our focus on ‘fix-it-first’ will continue.”

“We are firmly committed to doing what S.B. 1 calls for, which is maintaining a state of good repair on California’s roads, bridges, and other infrastructure. That’s a requirement of the law.”

CAPTI proposes ten guiding principles for decisionmakers to consider in transportation funding decisions, emphasizing social equity, safety, climate risk, and clean vehicles, among others. One principle specifically addresses reducing the amount Californians drive, because “even under the most aggressive scenarios for zero-emission vehicle adoption and a transition to cleaner fuels, the state simply cannot meet its climate goals relying solely on a shift in transportation technologies,” as CAPTI acknowledges. That principle calls for:

Promoting projects that do not significantly increase passenger vehicle travel, particularly in congested urbanized settings where other mobility options can be provided and where projects are shown to induce significant auto travel…. When addressing congestion, consider alternatives to highway capacity expansion, such as providing multimodal options in the corridor, employing pricing strategies, and using technology to optimize operations.

“CAPTI is not about taking things away from people,” said Kim. “It does not say ‘do not drive,’ nor does it take away your car. CAPTI is about giving people more options.”

That means making it possible for everyone, not just car drivers, to get around safely and conveniently – via robust and frequent transit, on bike or by foot. Substituting a skateboard, scooter, or bike for short car drives can over time put a big dent in emissions, but to be feasible there must be supportive infrastructure.

Commenters at the CTC meeting stated that any effort to reduce vehicle miles traveled (VMT) would “harm the economy.” Several also claimed that it would “harm low-income and people of color” who can’t afford to live in the urban core and therefore must drive farther between housing and jobs.

But others, including Nailah Pope-Harden of ClimatePlan, called CAPTI “long overdue, and the bare minimum.” “We can’t just make small pivots” to fix climate change, she said. “We understand the desire to be methodical, but communities can’t wait.”

The national transportation planning culture has been running with the idea that to solve congestion and access problems, it’s necessary to expand capacity so people can drive more quickly to more places – and now communities are paying the price for it in increased car reliance, few reasonable alternatives, worsening congestion, and a poisoned and warming planet.

CAPTI is an attempt “to shift us away from that kind of thinking,” said Kim. But “change is hard and doesn’t happen overnight.”

“Some people may view CAPTI as a major change to the way we live our lives,” he said. “But I would point out that the biggest change by far to our lives is the climate crisis. As a transportation community, we have to get our arms around that. We can’t pretend to be a part of that solution if we don’t figure out how to best spend our discretionary transportation dollars.”

A really good use of that funding would be adding more money to the Active Transportation Program, which was a suggestion made by Commissioner Alvarado at the CTC meeting. Such a one-time infusion would be completely in alignment with the goals of the CAPTI, which says an important strategy would be to increase active transportation funding.

“There’s no question that the ATP is heavily oversubscribed and underfunded,” said Kim. “The entire transportation community is united on that point. The proposal for $2 billion appropriation would be a one-time infusion, but what’s really needed is a long-term, sustainable increase for the ATP. We are fully committed to working with the commission on a way forward on this.”

Potential sources include federal funding, which could be part of the infrastructure package being discussed now in Washington. CAPTI contains other suggestions, including an overall increase in the ATP by taking a small amount from each of multiple other programs, in recognition of the need but also the impact on travel and emissions that could come from high-quality active transportation infrastructure. Bringing the ATP a tiny bit towards being on a par with highway funding would be an amazing change for California, and would show that the state is serious about fighting climate change.

At the CTC meeting, Kim and CalSTA staff emphasized that the CAPTI is a “living document,” meaning it is not supposed to be set in concrete, but adaptable and flexible “as conditions change and we learn more – either about climate science, or about the benefits of certain investments over others.”

The overarching framework and principles are meant to be a foundation for the shift that needs to happen; the plan would move California into new and somewhat uncharted territory. Defining CAPTI as “living document” means it can be updated with new experience and new data, as well as new input.

At the recent CTC meeting, Kiana Valentine of Transportation California complained that the plan had no substantial performance measures –  that it doesn’t propose to evaluate its effectiveness at meeting climate change, health, and equity goals.

“That is a point well taken,” said Kim, “and that’s the kind of feedback we want to hear. I’m glad that came up the other day, and there will be further opportunities to provide comments like that. Technically, the deadline for comments is May 4, as we have a July 15 deadline to submit a final plan, but there will be multiple opportunities to offer comment.” CAPTI will be presented at the joint CTC-CARB-HCD (Housing and Community Development) meeting coming up on April 8, and CTC Commissioner Hilary Norton called for more public workshops, which are in the works.

Does the document mean that the CTC would need to change its own guidelines for programs it funds – such as the Congested Corridors program, which is aimed at easing congestion along busy routes, and the Trade Corridors program, which focuses on freight movement? CAPTI would seem to call for a stronger commitment in these programs to avoiding widening highways, for example – something that has been a contentious point in the past.

CAPTI was written in response to Governor Newsom’s executive order to find ways to leverage $5 billion in discretionary transportation funding to further the state’s fight against climate, and is aligned with other state policies, including the Air Resources Board’s emissions reduction scoping plan, and its report on the progress of Sustainable Communities Strategies.

It is meant to be “a piece of the puzzle” and not a total solution for transportation emissions. Applying these principles to only a portion of the state transportation budget won’t get California all the way to its climate goals, but creating a shift in thinking – creating a practice whereby planners, engineers, and decision makers at all levels consider the climate implications of their work – is a start.