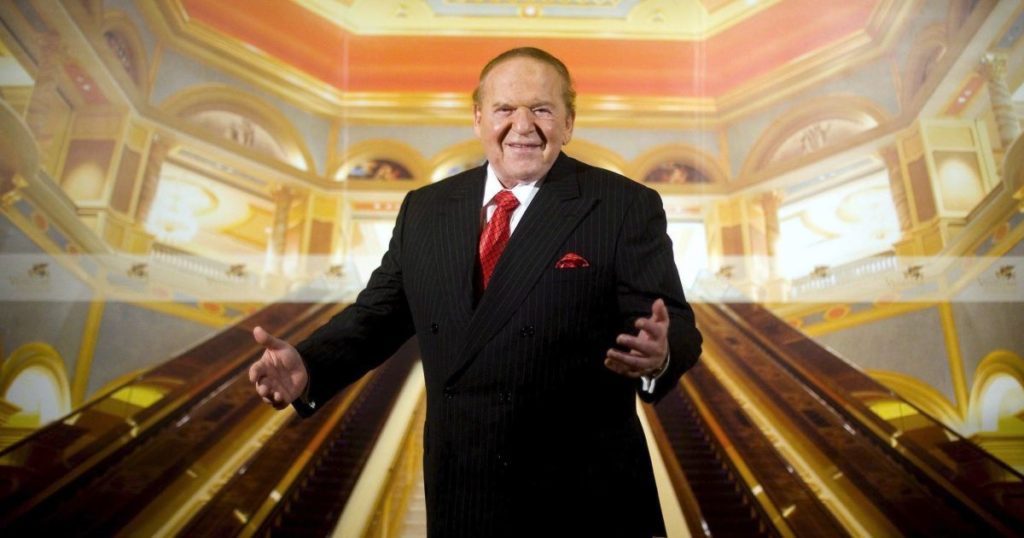 His death was confirmed by his wife, Miriam Adelson. Adelson was being treated for non-Hodgkin’s lymphoma, his company disclosed in early 2019.

Adelson was listed by Forbes magazine in 2020 as the 19th-richest American, with holdings estimated at $29.8 billion. After he took his Las Vegas Sands Corp. public in 2004, his wealth increased by $1 million an hour. During the 2008 recession, it plummeted for a time at $1,000 a second.

In the primary and general elections of 2012, 2016 and 2018, Adelson was far and away the top Republican political donor, giving a total of more than $302 million, including at least $35 million to President Trump. He and his wife, Miriam, a physician specializing in addiction, also contributed $5 million for Trump’s inauguration, the largest donation of its kind in U.S. history.

But when Adelson connected with the president in the summer of 2020 to discuss the coronavirus relief bill and the economy, Trump instead confronted the billionaire on why he wasn’t doing more to bolster his reelection campaign, Politico reported. Stung that Trump seemed unaware on how much money he’s donated, Adelson ended the conversation. Nonetheless, Adelson later donated $75 million to a political action committee supporting Trump’s reelection.

Adelson also was politically active in Israel, his wife’s homeland and a focus for much of the couple’s extensive philanthropy. In 2007, Adelson began financing Israel Hayom, a free tabloid newspaper that became Israel’s largest-circulation daily. The paper reflected Adelson’s hawkish positions on Israel and backed the hard-right policies of Prime Minister Benjamin Netanyahu.

Like Democratic mega-donors such as George Soros, Adelson was excoriated for using his vast wealth to buy political influence. But he shrugged off his critics, saying he was only trying to set right a system that had gone tragically wrong.

“There is absolutely no expectation of any favoritism whatsoever,” he told the British newspaper the Guardian in 2012, when he showered Republican candidates with more than $92 million. “Though if I’m fortunate enough to be invited to the White House Hanukkah party, I hope someone would save me a couple of potato pancakes. They ran out the last time I was there.”

A short man with thinning red hair who was forced into a motorized wheelchair by a painful nerve condition, Adelson had a grandfatherly affection for cornball jokes. He was also known for his uncompromising drive to succeed, his zeal for litigation, and his hardball negotiating tactics. At a panel discussion in 2014, he suggested demonstrating U.S. opposition to Iran’s weapons program by dropping a nuclear bomb over an unpopulated region of that nation’s desert.

“Then you say, ‘See? The next one is in the middle of Tehran. So, we mean business,’” Adelson said. “‘You want to be wiped out? Go ahead and take a tough position and continue with your nuclear development.’”

Both took a hard stand on what they saw as existential threats to Israel.

After Trump announced the U.S. would move its embassy from Tel Aviv to Jerusalem, “the true capital of Israel,” the Adelsons had front-row seats at the celebration of its opening. Adelson advocated cutting aid to the Palestinians and withdrawing from the Iran nuclear deal — actions Trump took in 2018. On election night in 2018, Adelson and his wife dined at the White House with the president and his inner circle, watching the midterm results roll in.

“I would put Adelson at the very top of the list of both access and influence in the Trump administration,” Craig Holman of the watchdog group Public Citizen told ProPublica. “I’ve never seen anything like it, and I’ve been studying money in politics for 40 years.”

Sheldon Gary Adelson was born in Boston on Aug. 4, 1933, and grew up in the tough Dorchester neighborhood. He was raised in a one-room tenement apartment, where he slept on the floor with his sister and two brothers.

“Mine is a rags-to-riches story,” he liked to say, “but we couldn’t afford the rags.”

At 12, he borrowed $200 from an uncle and landed the right to hawk newspapers on a prime street corner. At 16, he broke into the candy machine business, then did a stint in the Army and a year at City College of New York.

A driven young man, Adelson threw himself into business after business. He sold de-icing fluid for windshields and ad space in financial magazines. He was a mortgage broker and a travel agent. In 1979, he started Comdex, a Las Vegas-based computer trade show that drew crowds of more than 200,000 and became the biggest event of its kind in the world.

Adelson’s career was framed in superlatives. After buying and later demolishing the aging Sands hotel, he and his partners built the Venetian Las Vegas, an opulent resort with marble pillars, Renaissance-style ceiling frescoes, a fleet of gondoliers skimming down a Grand Canal, and more than 1,000 slot machines.

“It’s full of richness. It’s full of luxury. It’s full of decadence, and it’s full of romance,” he told reporters on a preview tour in 1999, adding that it was inspired by the city where he and his wife had honeymooned.

The Venetian also was the setting for what came to be called “the Adelson primary” — meetings where Republican presidential hopefuls would woo Adelson and pitch their agendas to the Republican Jewish Coalition, a group he backed.

From his office in the Venetian, Adelson laid the groundwork for even grander, glitzier operations. In Singapore, his company’s Marina Bay Sands boosted tourism by 20%. In Macau, the former Portuguese colony just off China’s coast, Adelson supersized the Venetian, constructing what his company described not just as the world’s largest casino, but “the world’s largest inhabited building.”

Adelson developed four more hotel-casinos in Macau — all on a strip that had been swampland before he filled it in. Macau became the world’s biggest gambling destination and, despite bitter litigation over his efforts, Adelson thrived.

In 2016, he agreed to a $9-million settlement with the U.S. Securities and Exchange Commission over accusations that his Macau operation had bribed Chinese officials. He also agreed to pay a reported $75 million to a Sands executive in Macau who resigned after allegedly being pressured to seek dirt on Chinese regulators and to allow prostitution in Sands properties.

When the chips were down, Adelson often went to court. In a 10-year period, he was a party to 150 lawsuits in Nevada’s Clark County alone, according to the Washington Post. In 2018, a lawsuit accused him of “legal sadism” for needlessly prolonging legal proceedings to weaken his adversaries.

In a libel action filed by Adelson, a Las Vegas Review-Journal columnist was forced into bankruptcy just as his young daughter was undergoing treatment for brain cancer. When Adelson secretly acquired the Review-Journal in 2015, the columnist, John L. Smith, quit after being banned from writing about the new owner of the state’s largest newspaper.

Adelson was even sued by Gary and Mitchell Adelson, two sons from his first marriage, who claimed he had cheated them in a transaction of company stock. A Massachusetts judge ruled that Adelson, while “perhaps lacking paternal kindliness,” had not defrauded or misled his sons.

Mitchell Adelson died of a drug overdose in 2005.

In addition to his wife, Adelson’s survivors include four children from his two marriages.

In 1993, the Adelsons established a nonprofit drug clinic in Tel Aviv. They subsequently built two more, in Las Vegas and Macau. Adelson also invested heavily in campaigns against the legalization of marijuana, contending it was a gateway to addiction for his son and countless others.

Through family foundations, the Adelsons gave millions to medical researchers in Israel and the U.S. They also funded Jewish education, contributed to Yad Vashem, the Israeli Holocaust memorial, and gave more than $410 million to Birthright, an organization that brings young Jews from all over the world to Israel.

Even before his marriage to Miriam, Israel was a cause close to Adelson’s heart.

On his first trip there, the well-heeled businessman wore shoes that had belonged to his late father, a Lithuanian immigrant who drove a taxi for a living.

Arthur Adelson had never gotten to visit Israel, his son told many audiences, and it was only fitting that at some point his shoes should touch the ground.