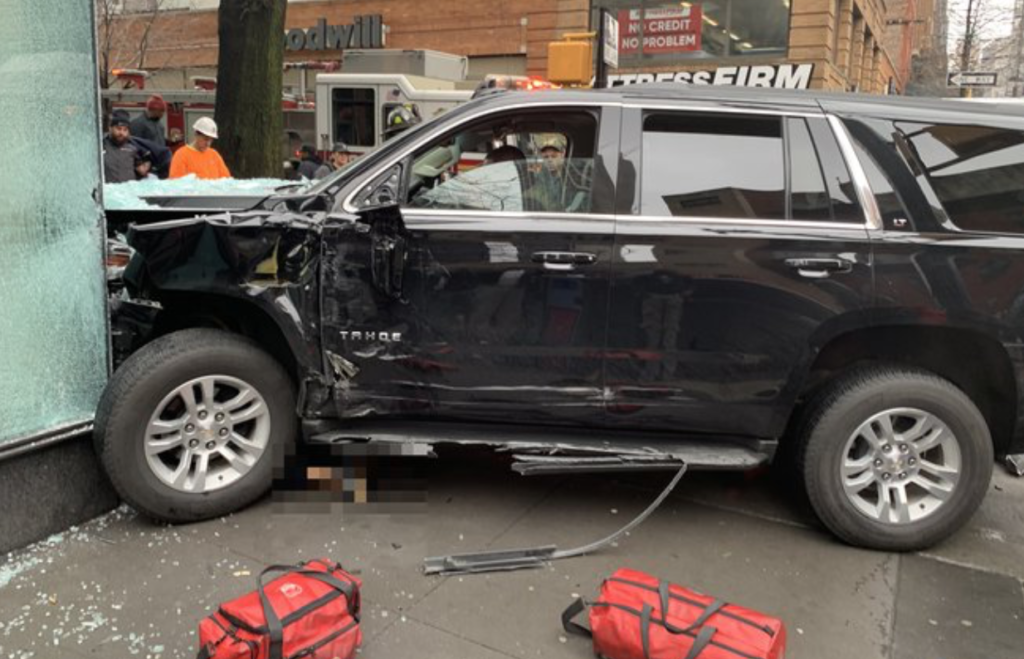 SUV ownership is on the rise in New York City, and that’s bad news for pedestrians, cyclists and anyone who values safe streets.

The number of sport utility vehicles owned by city residents rose by 21 percent between 2016 and 2020, from 974,359 to 1,180,722, according to state Department of Motor Vehicles data obtained by Transportation Alternatives through a public-records request. Over that same period, the number of sedans in the five boroughs dropped by 17 percent, from 971,908 to 807,482.

By 2020, SUVs made up more than 60 percent of personal vehicles in the city, up from around half just four years earlier, the data show.

So it’s no surprise then that SUV-caused carnage on city roads has risen as well. In 2016, SUV drivers killed 40 pedestrians and cyclists in the city and injured 3,103 more, according to Crash Mapper. In 2019, the last full year with reliable statistics, the numbers had risen to 70 SUV-caused pedestrian and cyclist deaths and 5,926 injuries.

That’s an increase in fatalities of 75 percent and an increase in injuries of 91 percent. The share of fatalities involving SUVs has increased 55 percent for cyclists and 47 percent for pedestrians compared to 2014, the first year of Mayor de Blasio’s tenure. The share of cycling and pedestrian deaths involving sedans declined 57 and 33 percent over the same period, Transportation Alternatives reported.

Staten Island and Brooklyn saw the greatest increases in the number of SUVs.  Those boroughs also happen to be on pace this year to have the most traffic fatalities since the beginning of Vision Zero in 2014, according to TA. Brooklyn has had 33 so far, while Staten has had eight.

Experts — including former city DOT Commissioner Polly Trottenberg — say the rise in deaths and the rise in SUV purchases are, of course correlated.

“The popularity of SUVs and light trucks are contributing to the increase in roadway fatalities in New York City and nationally,” Trottenberg said in 2019. “If you’re behind the wheel of one of those vehicles … you need to take extra caution. It has a lot more weight … poor visibility, it takes you longer to brake and it is harder to see around turns. Drivers of those vehicles need to drive very carefully to compensate.”

Present-day DOT spokespeople did not respond to a request for comment for this story. In prior stories, the agency has said it is doing a lot to reduce road carnage of all kinds, including increasing the number of speed cameras, continued road redesigns to calm left-turns and various education programs.

Nonetheless, 90 people have died on the roads so far this year, up 45 percent from the same period last year.

According to the National Highway Traffic Safety Administration, pedestrians are two to three times more likely to die if they’re hit by an SUV or other assault car compared to a passenger car.

The reasons are simple, according to the advocacy group Smart Growth America: SUVs are heavier than sedans, their tall front ends are more likely to strike a vulnerable road user in the torso or head, their height makes it harder to see down to ground level, and they’ve gotten bigger in recent decades.

Perversely, some of the same features that make SUVs dangerous to others might help explain their growing popularity.

Robert Sinclair Jr., a spokesman for AAA Northeast, said city drivers may be buying more SUVs because they make it easier to see farther down the road and over parked cars, they come with all-wheel drive that handles well in snow, and they typically fare better in crashes than smaller cars. Better for the passengers, that is. Meanwhile, pedestrian deaths are soaring nationwide.

New York street-safety advocates are pushing for immediate remedies, including a bill under consideration in Albany that would require information about vehicles for sale to include how dangerous they are to pedestrians and cyclists. The measure is part of a package of proposed street-safety statutes called the Crash Victim Rights and Safety Act.

“We need to pass the entire Crash Victim Rights and Safety Act this year to combat the rise in traffic violence across the entire state,” Transportation Alternatives Deputy Director Marco Conner DiAquoi said in a statement. “In doing so, we can become a leader nationwide in revealing the danger that SUVs pose to vulnerable road users outside of the vehicle.”

“These increasingly larger SUVs pose a real danger to pedestrians and cyclists across our city, and this growing trend must be addressed,” he said in a statement. “I’m proud to have sponsored a bill to create a transparent, accessible pedestrian safety rating system for motorists, cyclists, and pedestrians to understand the dangerous trends associated with certain vehicle models.

“We need to pass measures like these included in the Crash Victim Rights and Safety Act so that no one has to live in fear of crossing the street,” he added.

Lisa Koumjian, a spokeswoman for the state DMV, declined to comment, saying that she had not seen the data analyzed by Transportation Alternatives.