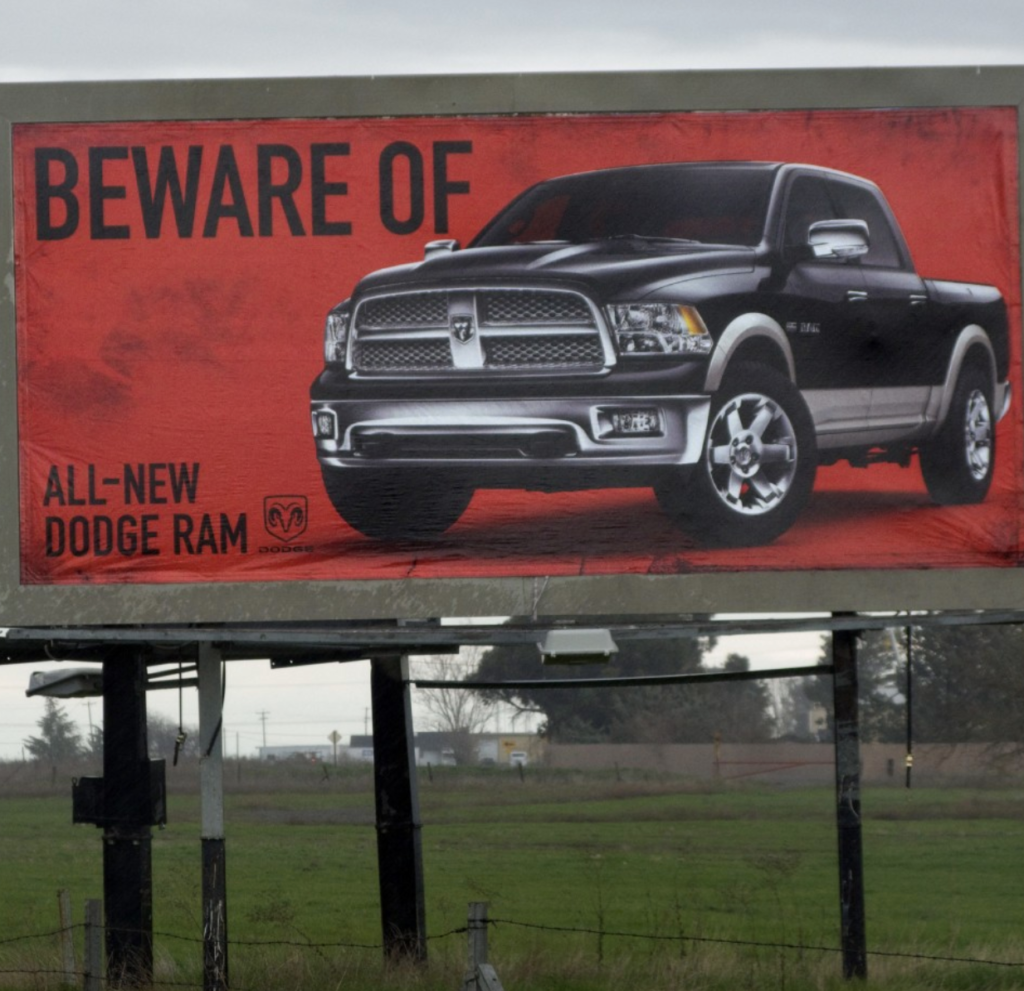 You’ve seen them more times than you can count.

An over-produced SUV commercial where a multi-ton megacar hits 100 miles per hour in an eerily empty downtown.

A macho pick-up ad where a truck the size of a Sherman tank climbs a pristine mountain in what looks like an endangered wolf preserve.

A Superbowl spot that celebrates an electric Hummer’s ability to silently accelerate from zero to 60 in three seconds, never mind what that might mean for an unsuspecting pedestrian in its path.

Yes, friends, we’re talking about U.S. car commercials. And today, we’re launching a contest to find the most worst of the bunch — and starting a conversation about the impact that auto advertising has on American culture, as well as our roads and streets.

They use that enormous budget — all that messaging — to influence drivers to buy bigger and bigger vehicles at higher and higher markups for them. With terrible consequences for the climate/safety/humanity

In the style of Streetsblog’s popular Sorriest Bus Stops and Parking Madness contests, America’s Most Toxic Car Commercial will culminate in a March Madness-style, bracket-based voting competition where you’ll have a chance to pick which ad deserves this year’s Most Toxic Car Commercial title. And along the way, we’ll dive deep into how this industry glorifies reckless driving, knowingly fuels our pedestrian death crisis, and often glosses over the climate impact of the dirtiest (and, critically, most profitable) cars around — as well as a few thoughts from advocates on what we should do about it all.

Submissions are open now via Google Forms, or feel free to upload a Youtube link to Twitter with a few words about why you think your ad deserves the title; just be sure to tag @StreetsblogUSA and use the hashtag #ToxicCarAds so we can find it.

And a few FAQs…

What makes a car commercial “toxic”?

There are certainly a lot of bad car commercials out there, but to claim the title of America’s Most Toxic Car Commercial, the submission should highlight something violent, aggressive, dangerous, disturbing, or otherwise corrosive about U.S. car culture, specifically. Does your least-favorite ad feature a driver performing a dangerous stunt maneuver usually reserved for action movies on a public highway? Does it celebrate speeding, swerving through busy pedestrian areas, aggressive off-roading, or other illegal or just-plain-reckless behaviors? Is it jaw-droppingly sexist, and seem to treat that sexism as a selling point? Does it just have a really unfortunate choice of spokesperson? Think big — chances are, we probably want to see it and poke a little fun at it.

But don’t car commercials just mirror back what consumers want?

Trust us, we’ll get into all that — but in the meantime, here’s a great op-ed from advertising pro Tom Flood on why it’s not quite so simple.

Oh, we couldn’t agree with you more. But while Washington debates a massive transportation bill that might do a little better on regulating at least some of the root causes of our traffic violence crisis (though it’s not looking good at the moment), we can at least have a little fun dissecting the ads that promote the most dangerous aspects of car culture as we know it — and talk about how we can do better going forward.

Does my submission have to be an American car commercial?

As long as the ad aired in the United States, it’s fair game. But it doesn’t necessarily have to come from a U.S. automaker.

Does it have to be video?

We’d prefer video — and we definitely need a link to an embeddable video file on Youtube, Vimeo or similar — but we could be persuaded by a toxic 2-D ad, too.

Does it have to be recent?

We prefer to talk about the ads that are shaping U.S. car culture right now — say, something that aired in the last five or so years. But when in doubt, submit it anyway.

Can I submit more than one?

When do you need my submission?

Tentative deadline for submissions is Friday, Sept. 3 at noon ET.

If we select your submission, we’ll DM or email you to give you a heads up the day before its match-up so you can be sure to vote and tell your friends.

What will I win if my submission is named the most toxic of them all?

Ultimately, everyone loses in a toxic culture, so…nothing but bragging rights. But you’ll have helped raise awareness about the subtle (and, uh, not-so-subtle) ways that auto advertising impacts American life (and our roadways death totals.)