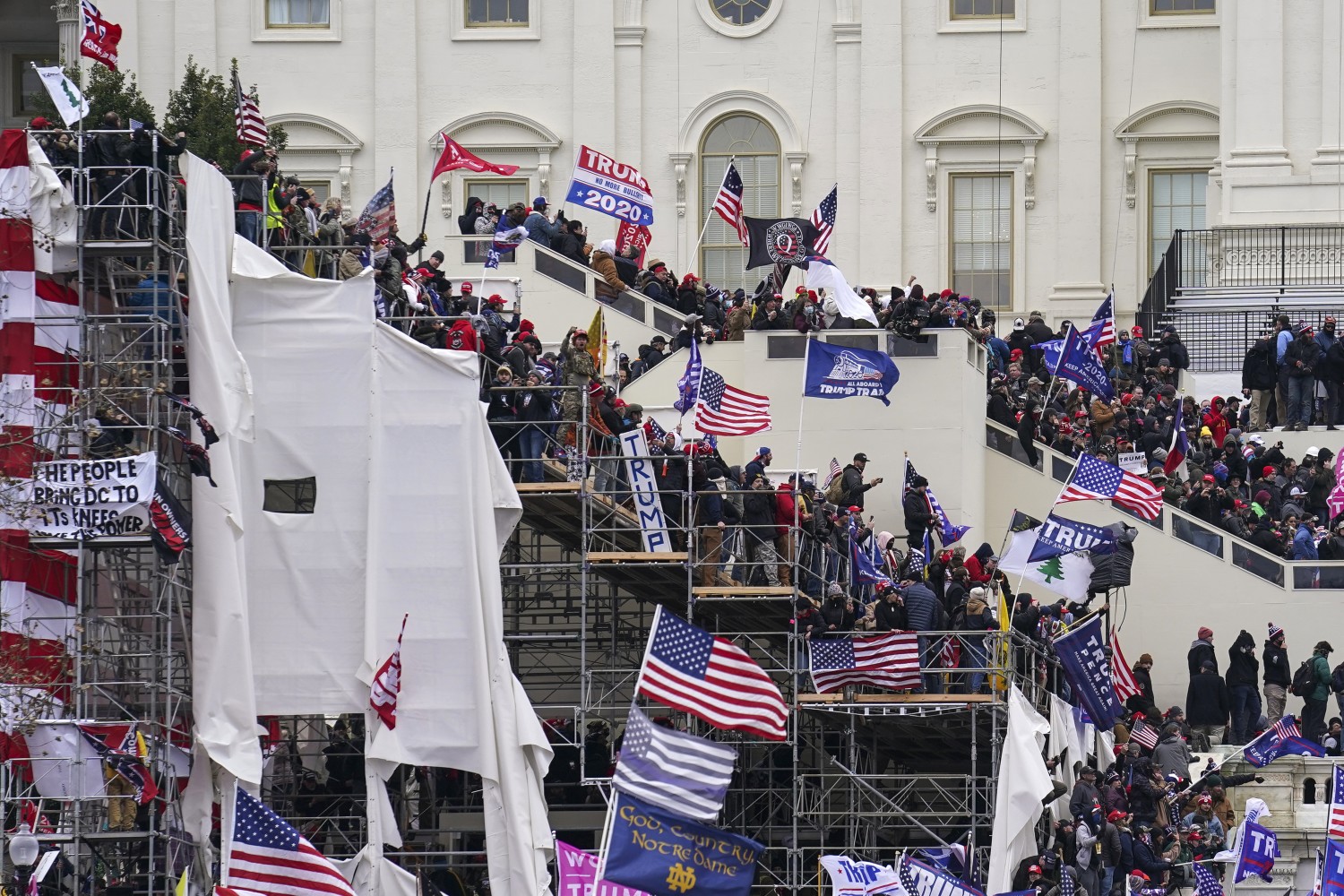 Less than five weeks after his riotous supporters stormed the Capitol, Donald Trump is set to go on trial a second time in the Senate — an impeachment proceeding that will give the public the fullest accounting so far of the former president’s role in the attack but almost surely not resolve a divided nation’s view of his legacy.

The split remains stark nationally and in California, where a new poll finds that more than 9 in 10 Democrats, but fewer than 2 in 10 Republicans, say they believe Trump was a major contributor to the insurrection.

Only 11% of California Republicans favor a Senate conviction of Trump, compared with 92% of the state’s Democrats, according to the poll released Monday by UC Berkeley’s Institute of Governmental Studies.

Republicans, however, have their own internal divisions over the former president, with a significant minority viewing him as at least partially culpable and rejecting him as a continuing leader for their party.

Similar divides show up in polls nationwide and in comments by Republican leaders.

“If it happened in the Soviet Union you would have called it a show trial,” Cassidy said on NBC’s “Meet the Press.”

But Rep. Liz Cheney of Wyoming, the third-ranking member of the House Republican leadership, defended joining nine other Republicans last month in voting to impeach Trump.

“What we already know does constitute the gravest violation of his oath of office by any president in the history of the country,” she said on “Fox News Sunday.” “This is not something we can simply look past, or pretend didn’t happen or try to move on. We have to make sure this never happens again.”

A recent survey for the Associated Press found only about 1 in 10 Republican voters nationwide support Trump’s conviction. That could be about the share of the 50 Republican senators who vote to convict: In a procedural vote late last month, five Republican senators voted against Trump — Susan Collins of Maine, Lisa Murkowski of Alaska, Mitt Romney of Utah, Ben Sasse of Nebraska and Patrick J. Toomey of Pennsylvania.

In addition to those five, a few others, including Senate Republican Leader Mitch McConnell of Kentucky, are considered possible votes against the former president. But the total remains far short of the 17 Republicans who would be needed, assuming all Democrats vote to convict, as seems likely.

Democrats say that even with the odds strongly against conviction, the trial, scheduled to begin Tuesday, must go on to provide some public and historical accountability for Trump’s conduct.

“Many Americans, and indeed, many senators may not be familiar with all of those facts that led up to that incitement of that mob,” Rep. Adam B. Schiff (D-Burbank) said Sunday on “Meet the Press.”

“You really need to present that full picture,” he added.

Both sides expect the trial to last roughly a week, which would make it significantly shorter than the previous one, a year ago. That timetable might not hold, however. The full schedule and many other details have yet to be announced.

Trump and House impeachment managers are scheduled to submit final trial briefs Monday. In their initial answer to the impeachment charge last week, Trump’s lawyers made two principal arguments: The statements he made to supporters before they stormed the Capitol were protected by the 1st Amendment, and the Senate cannot try him because he no longer holds office.

House prosecutors — and many outside constitutional scholars — dispute both those points. The 1st Amendment might protect Trump against criminal charges, they argue, but provides no bar to an impeachment trial, which is meant to protect the country against leaders who abuse their power, including the power of their words.

As for the Senate’s authority to try Trump, legal experts differ. Supporters of the trial note that Trump was in office when the House impeached him last month, making that vote clearly constitutional. The Constitution gives the Senate the power to try “all impeachments,” and House prosecutors stressed that the text has no exception for conduct that comes late in a president’s tenure. Otherwise, they note, a president would have a free pass to abuse his office so long as he waited until the final weeks.

“I think it’s clearly constitutional to conduct a Senate trial,” Toomey said Sunday on CNN’s “State of the Union.”

If Trump is convicted, the Senate could then vote by simple majority to bar Trump from running again.

Public opinion on the trial depends heavily on how voters view his culpability. In the AP survey, nearly 9 in 10 Americans who thought Trump bears significant responsibility for the riot favored his conviction, and about 9 in 10 of those who said he has little or no responsibility opposed it.

The UC Berkeley poll asked California voters to assess the role that eight factors played in the attack.

In addition to Trump, large majorities of Democrats — roughly 8 in 10 or more — blamed social media, political polarization, disinformation, Republican officials and white nationalists, saying each of those were a “major factor” in contributing to the riot.

Large majorities of Republicans also blamed social media and polarization, and about half of GOP voters blamed disinformation. But only a quarter of Republicans said white nationalists played a major role while about 8 in 10 said the news media did.

Nearly half of Republicans said President Biden was a major factor in contributing to the riot.

None of the Trump Republicans in the survey favored convicting the former president; about 1 in 5 Republicans who identified primarily with the party did so.

Those divides also showed up when the poll asked California voters how they felt about Biden’s election.

Asked how they think history will judge Trump, 60% of California voters said he’ll be viewed as among the worst American presidents, and an additional 9% said he’d be considered below average. By contrast, 12% said he’d be viewed as one of the best, and 9% said above average.

The Berkeley IGS poll, supervised by Mark DiCamillo, was conducted online in English and Spanish from Jan. 23-29 among 10,357 registered California voters. The margin of error for the full sample is about 2 percentage points in either direction. Details on the questions, methodology and data can be found at the Berkeley IGS website.