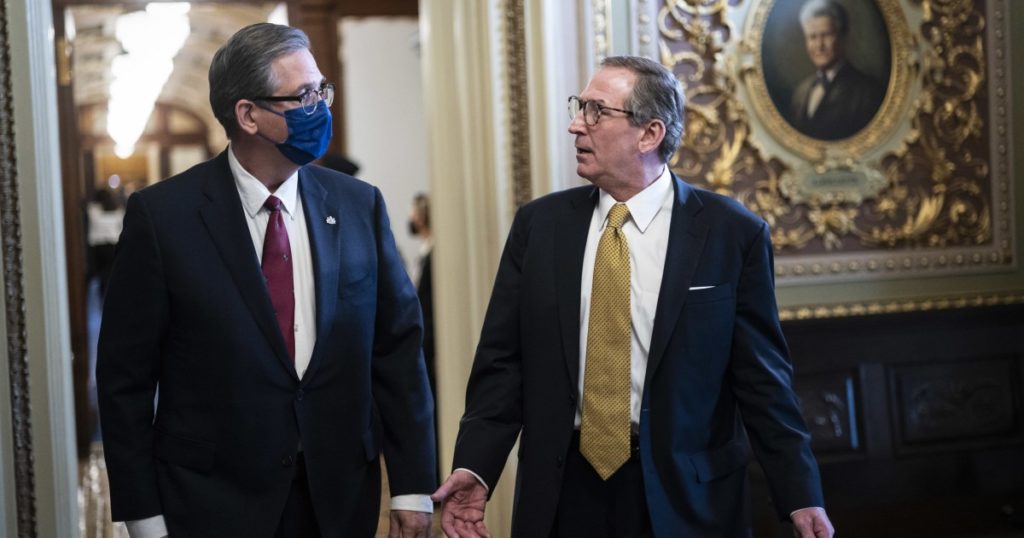 The Senate on Saturday is expected to close the second impeachment trial of former President Trump with a vote that falls far short of the 67 that Democrats would need for conviction.

While Trump’s acquittal is all but certain, he could face rebukes from several members of his own party, exposing the fissures he formed within the GOP during his presidency. One year ago, Sen. Mitt Romney (R-Utah) became the first senator to ever vote to convict a president of the same party. This year, at least six Republican senators could join with Democrats to convict Trump, having broken with their party earlier this week to vote that the trial is constitutional.

Trump is the first president to be impeached twice and his trial is the first in American history of a former president. He was impeached last month on a charge of inciting the insurrection Jan. 6, when a violent pro-Trump mob ransacked the Capitol. The riot left five people dead, including a police officer.

The Senate will convene at 10 a.m. Eastern to resume the trial; a final vote could take place by the afternoon. House Democrats who are acting as prosecutors will have the opportunity Saturday to ask the Senate to consider hearing from witnesses. The House managers have been tight-lipped on whether they will take that step, which if approved by the Senate would add days to the trial.

But new information in recent days has raised the specter of reopening the trial.

New reports Friday evening prompted calls from Democrats to hear from House Minority Leader Kevin McCarthy (R-Bakersfield). On the day of the insurrection at the Capitol, McCarthy called Trump to ask him to get his supporters to stop.

Trump’s retort led to a shouting match between the two men.

“Well, Kevin, I guess these people are more upset about the election than you are,” Trump said, according to a CNN report and confirmed by Rep. Jaime Herrera Beutler (R-Wash.), who said she heard McCarthy recount the conversation.

Another remaining question is when Trump knew Vice President Pence was in danger in the Capitol. Trump’s legal team said Friday that the president did not know he was at risk when the former president sent a tweet claiming Pence lacked the “courage” to block the counting of electoral votes about an hour into the riot.

That is in contradiction to Sen. Tommy Tuberville’s (R-Ark.) claim that he told Trump in a phone call on Jan. 6 that Pence had just been evacuated from the chamber, a sign his security detail sensed danger. Pence was evacuated just before 2:15 p.m. Trump sent his tweet at 2:24 p.m.

Tuberville said he had been on the Senate floor when he was handed another senator’s cell phone. “It was the president. He said a few things. I said. ‘Mr President, they’ve taken the vice president out. They want me to get off the phone, I gotta go,’” Tuberville told reporters Friday. “So, probably the only guy in the world who hung up on the President of the United States.”

Despite the lingering questions, both Democrats and Republicans appear eager to move on. The trial, which began in earnest Tuesday, will be the shortest in presidential impeachment history. Democrats are eager to resume work on President Biden’s COVID-19 stimulus bill and approving administration appointments. And Republicans, even those who have defended Trump, are looking to put the ugly and deadly insurrection behind them.

After the issue of witnesses is settled, senators will hear closing arguments before voting on conviction.

It is unknown how many Republicans will support conviction. GOP leaders say they’re not keeping tabs on how their colleagues will vote.

The six Republican senators who voted this week that the trial is constitutional – and considered the likeliest to support conviction – are Romney, Sens. Susan Collins of Maine, Lisa Murkowski of Alaska, Pat Toomey of Pennsylvania, Ben Sasse of Nebraska and Bill Cassidy of Louisiana.

“I’ve got three legal pads of notes,” Cassidy said Friday evening ahead of his own deliberations on how he would vote. A photo circulated Friday of Cassidy holding a written argument explaining a vote for acquittal but the senator said he had a similarly prepared release for conviction, underscoring that he was undecided.

If there are other surprises, it would likely come from one of the senators who is retiring, such as Sen. Rob Portman of Ohio. Senate Minority Leader Mitch McConnell (R-Ky.) told colleagues on Saturday morning that he would vote acquit. His wife, Elaine Chao, resigned as Trump’s labor secretary over the riot.

Had McConnell voted to convict, it would have likely made his path to trying to retake the majority in 2022 much more difficult, given that it would likely require support from – or at least not opposition from – Trump.