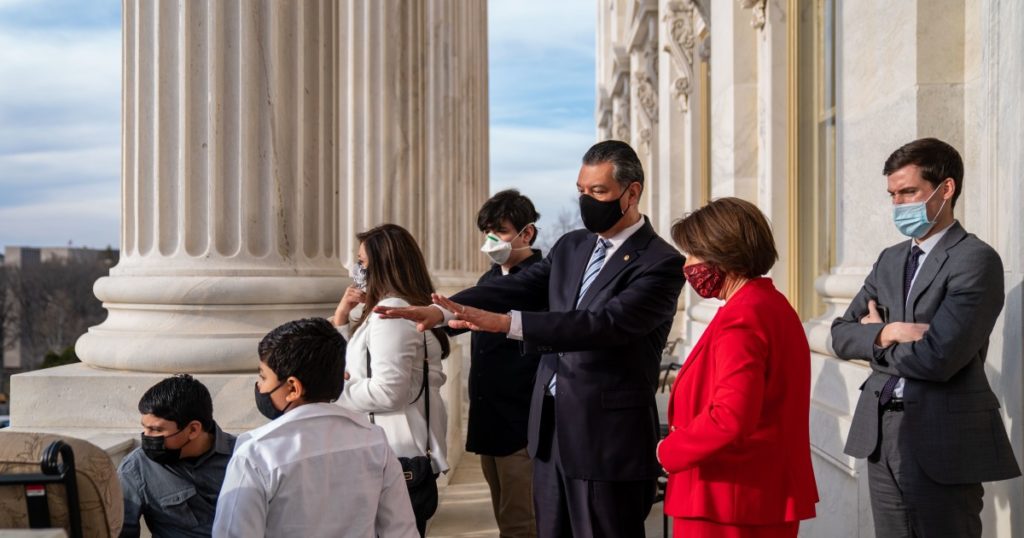 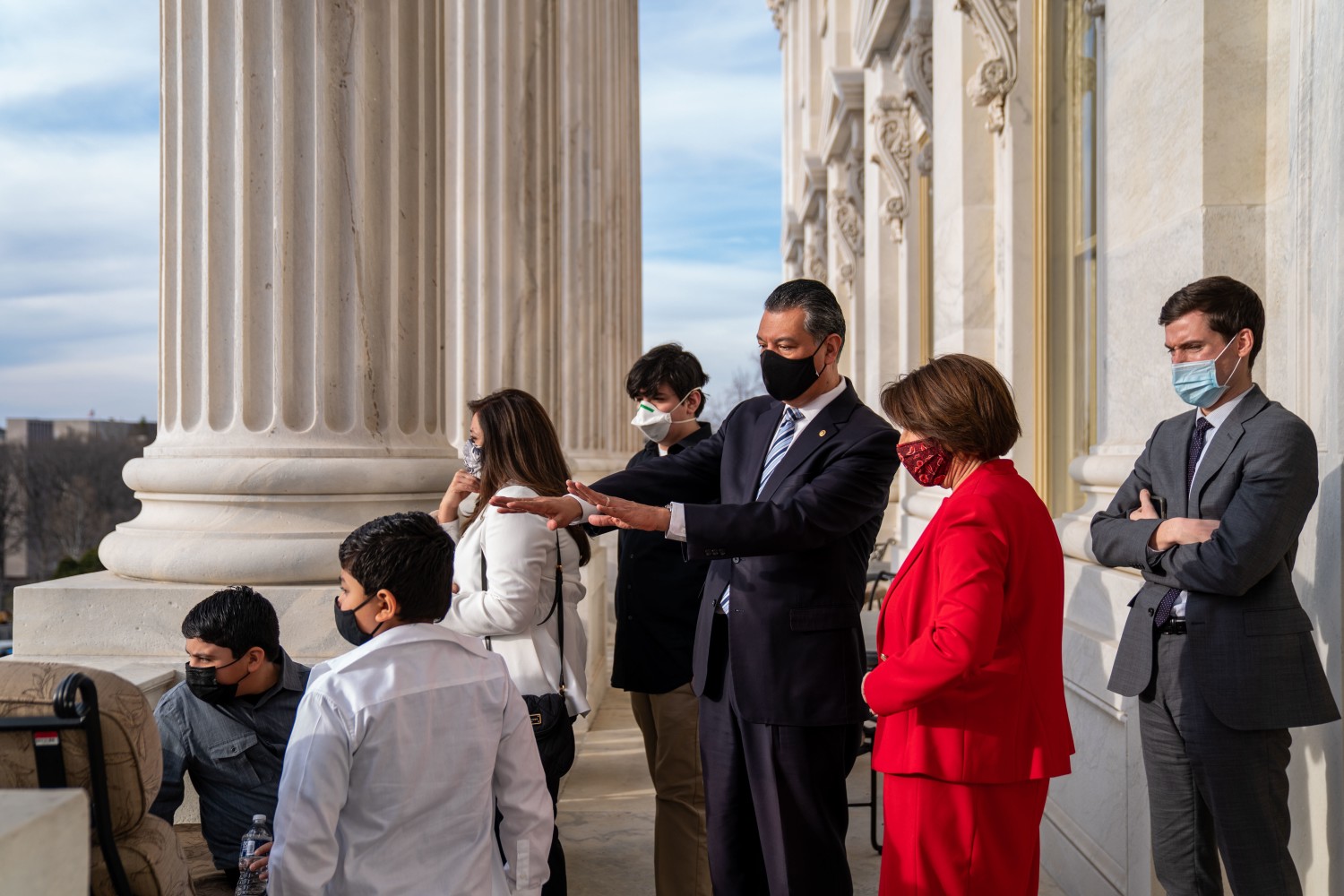 Since the moment he entered the Senate, everything in front of Sen. Alex Padilla has appeared to be a crisis.

Simmering beneath the surface of virtually everything Padilla does these days is perhaps the greatest urgency of all: just three months into a job he was appointed to by Gov. Gavin Newsom, California’s first Latino senator has only 18 months to convince voters that he should keep it.

Unlike most senators who are elected with lengthy six-year terms that give them space to learn the Capitol and build seniority before they have to run for election again, Padilla is on a much tighter timeline. He is filling the last two years of now-Vice President Kamala Harris’ term and has to run next year to get his own full term.

“It’s burning the candle on both ends, on both coasts,” he said in a first-floor meeting room of the Capitol.

A native of the San Fernando Valley born to immigrants from Mexico, he’s also a senator trying to find his place in an institution that doesn’t have many people of color, a point that drives him.

He refers to his position as “both a tremendous opportunity and a tremendous responsibility because the experience of someone like me has not been heard and considered enough in the history of the United States Senate, and I’m in a position to be able to do something.”

One of the first bills he wrote would fund $25 billion to convert diesel-powered school buses to electric vehicles, building on a proposal in Biden’s infrastructure plan designed to address public health and the environment. Up to 40% of the funding in Padilla’s bill would be directed to mostly nonwhite communities.

“In elementary school, in junior high, I remember what that smell was like,” he said. “Now I get to be the voice for those kids.”

One of his first challenges is to introduce himself to the millions of Californians who are his constituents and will eventually determine whether he gets his own full term. A second is to quiet the skepticism among some California progressives that he isn’t liberal enough — or assertive enough — for the job.

His strategy: Be everywhere and display unapologetic progressivism.

He was in one of Biden’s first Oval Office meetings with lawmakers to discuss infrastructure. He stood behind Rep. Alexandria Ocasio-Cortez (D-N.Y.) as she reintroduced the Green New Deal. He’s signed onto over 100 bills.

He’s done 95 media interviews, including “Real Time With Bill Maher” and local TV stations up and down the state. He’s done town hall meetings, including some with his longtime friends who now represent areas of Los Angeles in the House.

He’s also managed to tamp down questions about his progressive bona fides, a move that has helped clear the field — so far — of a serious challenge from a fellow Democrat.

Padilla is understated and serious, perhaps even subdued compared with the bombast of some of his colleagues. He doesn’t have Sen. Bernie Sanders’ (I-Vt.) meme-ready mannerisms. An MIT-trained engineer, Padilla is more likely to get his “geek on” with astronaut Sen. Mark Kelly (D-Ariz.) than throw rhetorical bombs on cable TV hits.

But on paper, Padilla is among the most progressive members of the Senate. In a Zoom call with the California Democratic Party’s Progressive Caucus, he sailed through a lightning-round quiz of his policy positions: He supports the Green New Deal, “Medicare for all,” the $15 minimum wage, a high-profile voting rights bill and statehood for the District of Columbia. He wants to eliminate the filibuster and he is open to expanding the Supreme Court.

He drew groans when he wavered on abolishing Immigration and Customs Enforcement — he wants to reform it instead — and his campaign’s acceptance of political action committee money. Padilla accepts some corporate money, but refuses it from industries with which he disagrees on policy, such as oil companies, gun makers and private prisons. But overall, progressives have found little to quibble about.

“He impressed everyone,” said Amar Shergill, chairman of the caucus, which in 2018 helped power progressive Kevin de Leon’s challenge to Sen. Dianne Feinstein (D-Calif.). “He is doing the work … to show publicly that he is in support of ideas that California progressives hold dear but are controversial elsewhere.”

Padilla has faced questions about his support for Medicare for all, citing a 2012 vote in the California Senate to establish a state single-payer system. Padilla abstained, explaining recently that he supported the bill in prior years, but that in 2012 was worried about painting the Affordable Care Act — which was then a key part of the presidential race — as not good enough.

Padilla said he supports Sanders’ Medicare for all plan, the gold standard for progressives, but acknowledged that Democrats would likely need stepping stones to get there.

Padilla’s progressive policy positions have had the result of clearing the field of a Democratic challenger. His campaign has racked up the support of 41 of the state’s 42 Democratic members of the House, including Rep. Katie Porter (D-Irvine), whose fundraising prowess could have posed a challenge.

The only Democrat not endorsing him is the one Padilla supporters most suspect could try to mount a challenge: Rep. Ro Khanna (D-Fremont). In a brief interview, Khanna refused to rule out a challenge, but left the impression it is unlikely.

“I’m happy where I am. I mean, I haven’t ruled anything out in my future, but I am chairing the environmental subcommittee [on the House Oversight Committee] and doing good work,” he said. “My hope is just to continue to have progressive policies and to the extent that the senator champions that, that’s what matters.”

Shergill similarly acknowledged that Padilla hasn’t had to face a difficult vote yet and said progressives will be eager to watch him.

“It’s California. He’s always going to have a challenger,” said Rep. Pete Aguilar (D-Redlands), who has been friends with Padilla for decades.

Padilla’s 2022 campaign officially started only a week ago. In the first quarter of this year, he raised $2.7 million, far from the amount he will need to fund a serious race if one were to emerge. His supporters are quick to point out that it is on pace with where Harris was after she first joined the Senate.

But given his newness in the Senate and the lack of a serious challenge for now, Padilla has to be more focused on the day job.

“He’s not going to spend 70 hours a week dialing for dollars,” said one campaign official. “Alex’s focus is on being a U.S. senator and delivering for California.”

Stressing again his sense of urgency, Padilla praised Senate Majority Leader Charles E. Schumer’s (D-N.Y.) “boldness” and speed, citing the need to move quickly in the face of coming election cycles in which Democrats could lose the majority or the White House.