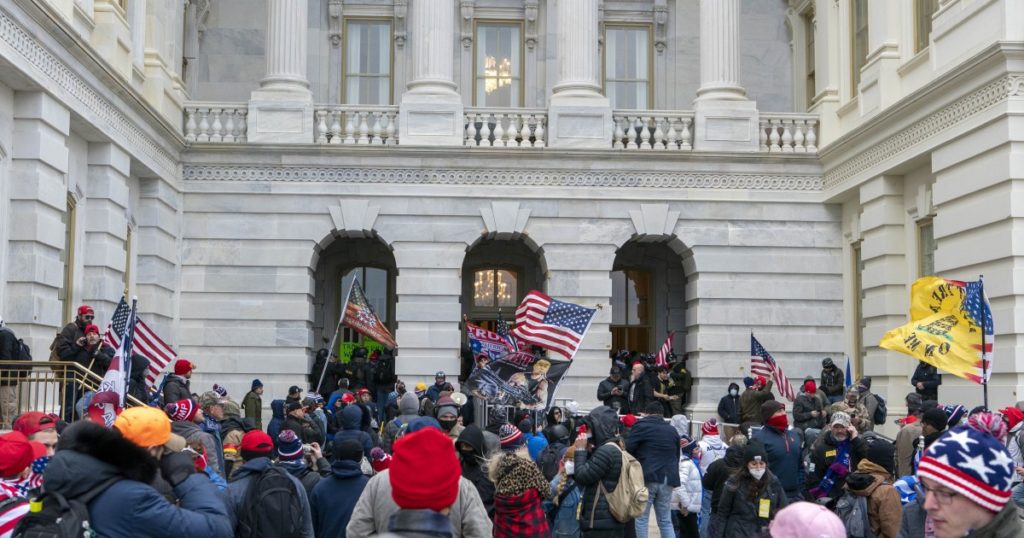 Members of armed right-wing groups that stormed the Capitol on Wednesday in blind support of President Trump’s futile attempt to stay in office said they supported the mob attack, calling it the beginning of another American revolution.

As the rabble pushed through barricades and swept through government corridors, Trump’s followers — wearing camo, backpacks and MAGA hats — created a disturbing, surreal scene that revealed the loyalty and violent inclinations among the extreme elements of the president’s base.

The attackers, mostly white men, some of whom espoused the sentiments of hate groups and white nationalists, were condemned by President-elect Joe Biden, who said of the mob violence: “This is not dissent. It’s disorder. It’s chaos. It borders on sedition, and it must end now.”

But Trump’s supporters saw themselves in a different light, even as courts, electoral boards, judges and bipartisan members of Congress have agreed that the president’s claim that he won the November election was dangerous fantasy and a threat to American democracy. Trump lost by more than 7 million votes.

“You’ve got pissed-off patriots that are not going to accept their form of government being stolen,” said Stewart Rhodes, who traveled to Washington to join the protest with members of the right-wing group he founded, the Oath Keepers.

“We’re walking down the same exact path as the Founding Fathers,” said Rhodes, a former Army paratrooper and Yale law school graduate who urged members to monitor the polls during the presidential election.

Rhodes said his group, which includes veterans and members of law enforcement, did not enter the Capitol or confront police.

“We shouldn’t be clashing with police,” he said. “We were in the streets and we were talking to the cops, telling them they should stand down and refuse to follow orders of the illegitimate legislators.”

But members of other armed right-wing groups — whipped up by Trump’s speech earlier in the day in which he refused to accept his election loss — praised the rioters for entering the Capitol by force.

Chris Hill, a Marine veteran who leads the 75-member Georgia-based III% Security Force called the attack on the Capitol a “shot heard round the world.”

Similar elation and bravado filled a national Three Percenter online forum Wednesday, even as much of the nation watched in alarm the scenes that appeared more reminiscent of unstable nations facing coups and insurrections in troubled parts of the world. A number of posts were scary indictments and a window into the rhetoric that has been playing out for years on nationalist and white supremacist channels and chat rooms.

“A start to a new beginning brothers! Let’s set the scales straight and if war sets afoot we will rebel!” Zachary Wallace wrote Wednesday in an online forum for members of the Three Percenters group.

“The time for voting and getting a little piece of the pie for our own labors is OVER. The time for action and a reset is NOW. ARE YOU AWAKE YET?” wrote a user identified as “Rodger OH” in the same forum, signing off in Latin “God’s Will,” a rallying cry from the Crusades.

“When do we take our country back?” asked Ian Gunning. “I hope this isn’t just a one time thing. The country needs to be reset and politicians need to be reprimanded. We run the country not them.”

Some called for peaceful protests at state capitals on Inauguration Day.

Others were disappointed that those who stormed the Capitol appeared to be unarmed and didn’t seize the building.

“You took and held the high ground just to walk away without even drawing your sword,” Nino Brunori wrote.

Rhodes said his group planned to stay in Washington on Thursday, although he wasn’t sure what would happen. He dismissed the presidential election as “a sham” and said Congress shouldn’t certify the results.

“We’re having an election stolen from us, we no longer have effective representation, we have pretend legislators,” Rhodes said. “We’ll see what president Trump does.”