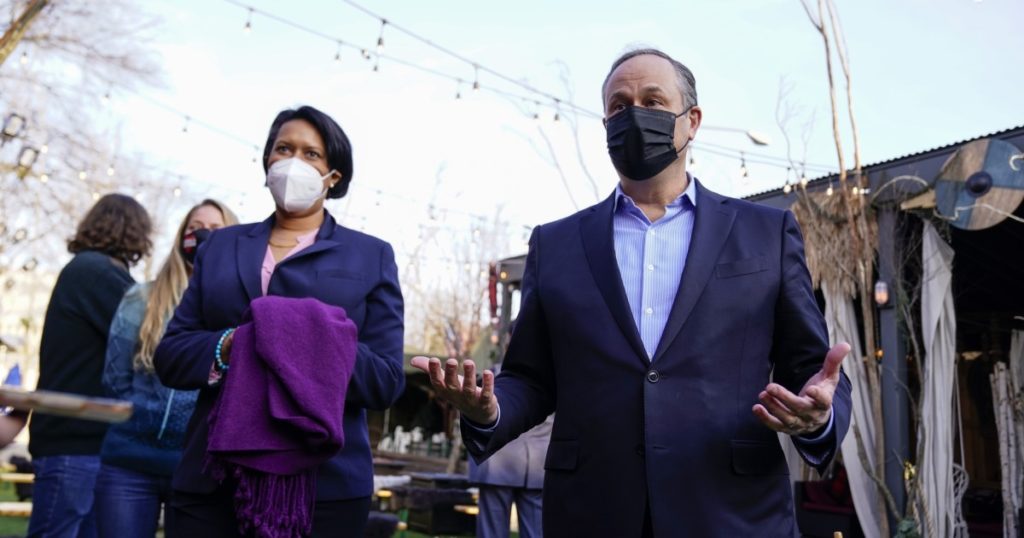 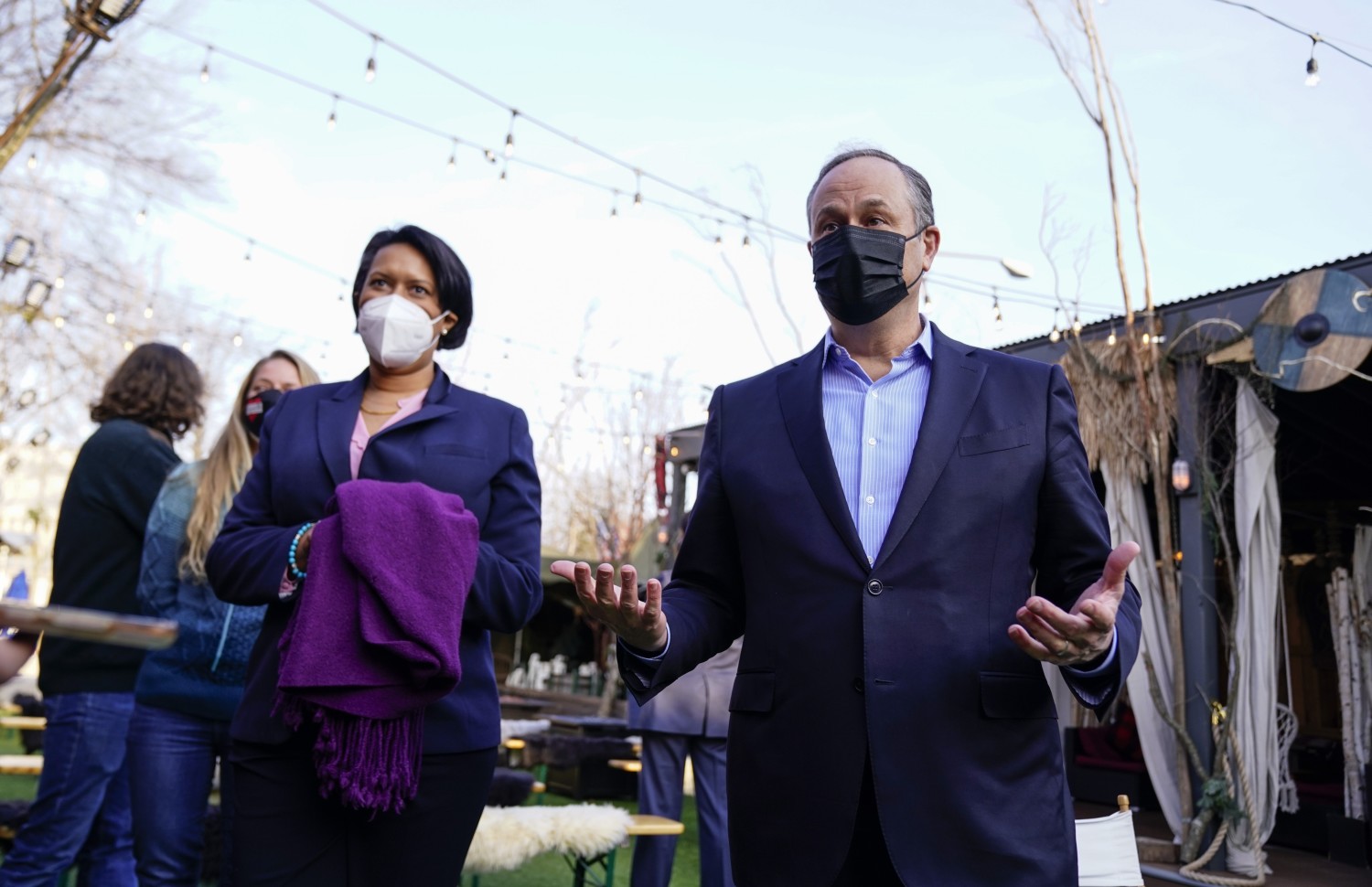 A few weeks after his wife Kamala Harris was elected vice president, lawyer Doug Emhoff decided to embark on his own career change: He became a law school professor.

“It’s odd,” Emhoff told reporters recently, explaining the reaction of his students at Georgetown University. “The ‘second gentleman’ is their teacher.”

“But we kind of dispensed with that,” he added. “It was maybe five minutes in the first class.”

Emhoff, 56, has a lot of experience dealing with odd situations. Just seven years ago, he led a private life as a Los Angeles entertainment lawyer and divorced father of two — powerful and well-liked in his world, but hardly known outside it. Then he became a history-making undercard: The first-ever second gentleman, to the first woman of color in national office.

Just as second ladies have had an amorphous job as wives to past vice presidents, with few official responsibilities, Emhoff is free to define his platform. He will hit the road with Harris this week on her first official trip, hoping to reprise his role on her vice presidential campaign as the happiest person on the trail and his wife’s chief cheerleader.

Emhoff and Harris are traveling Monday to Las Vegas and visiting Denver on Tuesday, sleeping in their Brentwood home in between events. Emhoff will then make a solo trip Wednesday to Albuquerque, N.M., as part of a broader effort by administration officials to promote the $1.9-trillion COVID-19 package that President Biden signed into law last week. (It’s spring break at Georgetown.)

After Biden and Harris were declared the winners in November, Emhoff quit his partnership at the law firm DLA Piper. Friends and White House officials say he has yet to pick a set of issues to promote, but he may combine his interests in food insecurity and access to justice with whatever the administration wants him to do.

“These roles have always been rooted in the administration’s priorities first,” said Hannah Hankins, who served as Emhoff’s communications director during the vice presidential campaign. “It’s not about one person’s portfolio.”

Last week, Emhoff and Washington, D.C., Mayor Muriel Bowser visited a century-old retail building that has become a distribution site for meals and care kits to hospitality workers who have lost jobs during the pandemic. Emhoff asked people for suggestions he could pass along to his wife, an approach he has used since the campaign.

He’s become a frequent presence on social media. Emhoff appeared in a video at the National Archives in which he reviewed the Supreme Court decision recognizing the right to marry someone of a different race, noting its personal significance. Harris is Black and South Asian, while Emhoff is white and Jewish, making their family by far the most diverse mix of race, culture and religion in the history of White House families.

“He’s very gregarious and very charismatic, so I’m sure he’s going to get out there,” said John Bessler, husband to Sen. Amy Klobuchar (D-Minn.). Emhoff and Bessler got to know each other while their wives served in the Senate and then ran against each other for the Democratic presidential nomination.

This month, Emhoff was spotted in the Capitol Hill neighborhood, walking and chatting with Chasten Buttigieg, husband of Transportation Secretary Pete Buttigieg.

The White House is still very cautious about Emhoff’s public image, declining multiple interview requests on his behalf and refusing to let a reporter observe his class. Some acquaintances would speak only with administration approval. Georgetown officials were similarly protective, declining to make the law school dean available.

Bessler and the small group of male Senate spouses have formed an unofficial club. Bessler and Bruce Mann, husband of Sen. Elizabeth Warren (D-Mass.), both law professors, offered Emhoff advice when he decided to teach.

“Maintaining some of your own identity is really important in a spouse role,” Bessler said, pointing out that Jill Biden taught community college when Biden was vice president and she was second spouse. She has continued to do so as first lady.

In the brief session with reporters after a public event last week, Emhoff said he misses his law practice, “but what an opportunity, if I’m going to leave, to be able to be in this administration and also to support my wife.” He said he was spending as much time as he could learning about issues from administration experts to advocate more effectively.

Bessler and Mann said they text and talk often with Emhoff. Mann, who led a quiet life teaching alongside Warren, also a law professor before she became a liberal sensation in her 60s, laughed for an extra beat when asked about the surreal nature of the change from private citizen to political spouse.

“There’s nothing natural about it,” he said. “That’s part of what makes it an adventure.”

Mark Buell, Harris’ longtime former finance chair, who gave the final stamp of approval to the marriage after a round of golf with Emhoff, said Emhoff has the confidence to stand aside in his wife’s shadow. He recalled a small gathering before a fundraiser during Harris’ run for president, where Emhoff waited in the corner.

“He was very deferential,” Buell said. “He was just standing back and she was doing her thing, and I thought that was the role he’s got to get used to.”

Harris was attorney general of California when the two married in 2014. Emhoff transferred his legal practice to Washington when she became a senator in 2017. According to Buell, Harris’ campaign for president just a few years later was not always in the cards, though others were not surprised.

“Obviously, he was aware of the person that he was dating,” said Chrisette Hudlin, a close friend of Harris who set the couple up on a blind date. “He’s a successful lawyer in his own right and I don’t think it was a shock for him, as much as it was a way for him to support her and be a good partner.”

Yet Emhoff had no experience in politics and, unlike Harris’ sister Maya, was not an active strategist in her early campaigns. His hobbies were sports, rock music and his kids — his fantasy football team, in a league with his son, is named “Nirvana” after the 1990s grunge band.

“They’re equal partners behind the scenes, but it’s very clear this is her world. This is her work,” said Hankins. “And he wants to support her in that.”

Emhoff gained a measure of fame during the campaign, especially among Democratic activists who celebrated his personal phone calls and Zoom chats. He learned from Jill Biden, who had been backing her husband’s campaigns for decades, and from people he met on the trail.

In a video produced for the inauguration, Emhoff spoke with researchers at the Library of Congress to review the history of second ladies. It is an overlooked position. Michelle Gullion, director of collections and research at the National First Ladies’ Library in Canton, Ohio, apologized to a reporter that her facility had little information on the subject.

“It’s so much more ceremonial” than the role of first lady, which comes with written instructions and long-established responsibilities, some of which are antiquated, Gullion said. Of second spouses, she added, “I would say you’re ‘seen’ at the important events.”

But that lack of scrutiny gives second spouses more flexibility. Some choose to share initiatives and causes with the first lady, as Jill Biden did with First Lady Michelle Obama in advocating for military families. Tipper Gore, perhaps the most famous second spouse, made headlines for challenging violent and sexist lyrics in pop music when her former husband Al Gore was still in the Senate, before he became Bill Clinton’s vice president. As second spouse, she focused on mental health, then a fairly taboo subject.

Is it unfair that Emhoff is getting more attention than women who had the role for centuries? “You could say everything is unfair for women,” Gullion said.

Both Mann and Bessler acknowledged the importance of normalizing the role of a male political spouse, including by not being self-conscious about it.

“Women have been playing that role of supportive spouse for a long time,” Bessler said. With more men in the role, Mann said, “part of the importance is seeing that it’s not forced,” but an organic aspect of the marriage.