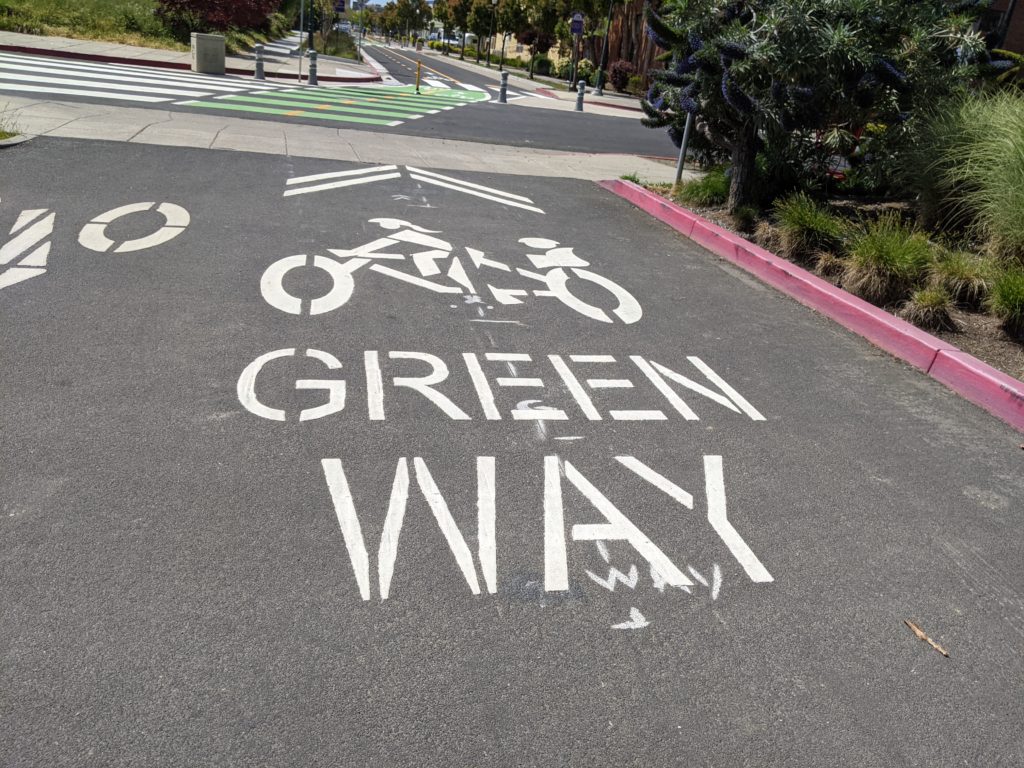 The key to making Doyle Street in Emeryville a safe, inviting street for cyclists and pedestrians of all ages: some old concrete garbage cans.

Vignesh Swaminathan, the consultant best known for redesigning San Jose’s downtown to be friendly and safe for cyclists, gave Streetsblog a tour Friday of recent improvements on Doyle.

He was hired last year to help Emeryville turn Doyle Street into a “slow street” as a response to the pandemic. “We started with water-filled, orange barricades,” he explained. But they wanted to take things a step further.

As they tested out configurations and let the street evolve, they replaced the barricades with painted markings–including the “family sharrow” markings of the lead image. They also squared off corners and turned the two-way street into a one-way (for cars, bikes can still go both ways) to make more room for people on bikes and foot. In other words, they turned it into a calm, quiet residential street.

And they used safe-hit posts to stop motorists from taking turns on and off the street at an unsafe speed or from parking on bike lanes. But unlike the safe-hit posts commonly used in San Francisco and Oakland, he chose plastic “K-72s that are designed to look like concrete.” In reality, they’re attached to the pavement by springs and will bounce right back into place if knocked in to.

But motorists have no way to know that and therefor take great care around them, lest they damage their paint.

Swaminathan didn’t think that was enough though. Doyle Street connects two parks and there are too many children around–he wanted something that could physically stop the occasional drunk or otherwise errant motorist who comes speeding through. It turned out Emeryville had some heavy-duty concrete garbage cans sitting in a warehouse.

The city put wooden lids on the cans (because they didn’t want to have to empty trash from them) and placed them at the corners to make sure nobody speeds through.

If Swaminathan looks familiar, it’s not just because of his notable work in San Jose and other cities. He’s also gained notoriety through his urban planning TikTok videos under the handle Mr. Barricade, something he came up with while isolating during the height of the pandemic–“I was bored,” he told Streetsblog.

Swaminathan makes the point that all cities can afford to make truly safe streets, if they think creatively. Emeryville had concrete garbage cans. But every city has something solid they can use to protect cyclists and pedestrians if they really want to. Unfortunately, too many cities, he said, are so focused on appeasing motorists and getting grants and spending money, they over engineer things or settle for posts-and-paint without the concrete to back it up.

Meanwhile, his TikTok channel has attracted 370,000 followers–in addition to sound street engineering advice, it includes some slick dance moves, social commentary, satire, and instructions on how to eat Indian food. It caught the eye of the San Jose Mercury News, which did a photo shoot with Mr. Barricade Friday morning (see pic below) and is writing a feature about him. Check out Streetsblog’s headlines next week for the link.