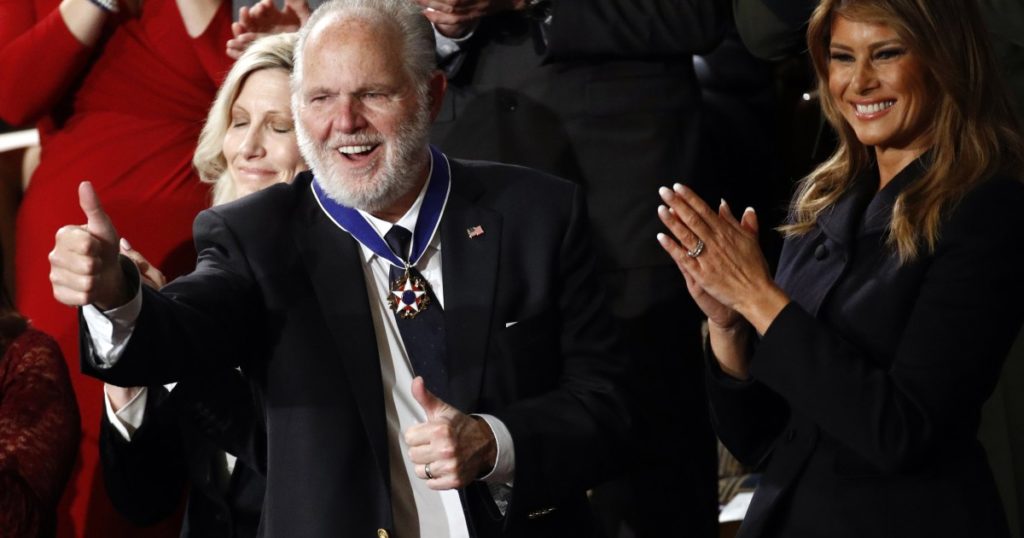 Rush Limbaugh, the controversial and widely influential conservative radio personality, author and former television host who amassed tens of millions of listeners and was, at his peak, the most-listened to radio show host in the nation, has died, his wife confirmed Wednesday on his radio show.

Limbaugh, who last broadcast Feb. 2, died of lung cancer. He was 70.

“Rush will forever be the greatest of all time. Rush was an extraordinary man. A gentle giant. Brilliant, quick-witted, genuinely kind. Extremely generous. Passionate. Courageous. And the hardest working person I know,” Kathryn Limbaugh said.

She added: “Rush encouraged so many of us to think for ourselves. To learn and to lead. He often said it did not matter where you started or what you look like, as Americans we all have endless opportunities like nowhere else in the world.”

“In loving memory of Rush Hudson Limbaugh III — the greatest of all time,” was posted on Limbaugh’s website.

Former President Trump spoke to Fox News about Limbaugh’s death, saying, “He was very brave. He could, in theory, have been gone four months ago. Really. He was fighting until the very end. He was a fighter.”

The right-wing talk-radio host began his career in the 1980s as a disc jockey. In Sacramento in the mid-’80s, Limbaugh adopted a radio format that weaved political and news commentary and listener calls, all with a conservative slant.

He started at WABC-AM in New York City later that decade, where he built a national platform and became an eminent media personality.

Limbaugh first broadcast the nationally syndicated “The Rush Limbaugh Show” in 1988 and quickly exploded onto radio stations. At the peak of his influence in the 1990s, he had amassed as many as 20 million listeners a week, with about 12 million daily across 600 radio stations throughout the country. His radio show — which he hosted from Palm Beach, Fla., after moving there in the late 1990s — was as big as the top-rated TV series on cable and networks.

“All it takes is the mention of my name and the predictable left-wing groups have a cow,” he once boasted.

By 1994, Limbaugh’s massive influence was unmistakable. Newt Gingrich, former speaker of the U.S. House of Representatives, and other Republicans called themselves part of the “Limbaugh Congress” when they appointed the radio host an honorary member of the House that year.

Republicans credited Limbaugh with helping them gain control over the House for the first time in decades, and said the radio personality had given them the courage to “take back our country.”

His loyal, tuned-in clan affectionately called themselves “dittoheads” — shorthand for a person who enjoyed listening to or agreed with the ideas and opinions of Limbaugh.

A staunch supporter of the former president, Limbaugh was awarded the Presidential Medal of Freedom during Trump’s 2020 State of the Union address, a day after the radio host announced he was diagnosed with advanced lung cancer.

Trump called him “the greatest fighter and winner that you will ever meet” and thanked him for his “decades of tireless devotion to our country.”

Others were much less enthusiastic about granting Limbaugh the nation’s highest civilian honor. Then-presidential hopeful Joe Biden, who’d been a Medal of Freedom recipient, criticized Trump’s decision and motives.

He said on CNN that Limbaugh “spent his entire time on the air dividing people, belittling people” and said the president was “driven more by trying to maintain [his] right-wing political credentials than it is anything else.”

“I mean, if you read some of the things that Rush has said, about people, their backgrounds, their ethnicity, how he speaks to them … I don’t think he understands the American code of decency and honor,” Biden said. “But look, this is Donald Trump.”

Limbaugh was often embroiled in controversy, making headlines for his provocative opinions and seemingly unfiltered remarks; detractors scrutinized him as a divisive figure who habitually distorted facts.

He once called Hillary Clinton “sex-cretary of State” and wished that newly elected President Barack Obama would founder.

In 2012, Limbaugh came under fire for calling an activist law student a “slut” and “prostitute.” The furor began when Limbaugh was addressing then-President Obama’s suggestion that birth control be provided free of charge. Sandra Fluke, a Georgetown University student, expressed her support for the idea during a congressional hearing. The radio host targeted her in a multiday tirade.

“We want you to post the [sex] videos online so we can all watch,” he said, describing Fluke as a member of the “feminazis” and accusing her of wanting the government to subsidize her sex life. As a result of his comments, an immediate online backlash ensued. Advertisers revolted and pulled back. Limbaugh apologized for his remarks days later, a rare act for the radio tycoon.

“I chose the wrong words in my analogy of the situation,” he said at the time.

When Florida was under threat from Hurricane Irma in 2017, Limbaugh went on air to accuse media outlets of inflating the storm’s threat to further a political agenda and to increase sales of bottled water, saying, in part: “So there is a desire to advance this climate change agenda, and hurricanes are one of the fastest and best ways to do it. You can accomplish a lot just by creating fear and panic.”

His remarks spurred swift criticism. Weatherman Al Roker from NBC quickly pushed back on Twitter, telling his followers to ignore Limbaugh’s comments. “He is putting people’s lives at risk,” Roker wrote in one tweet. “To have @rushlimbaugh suggest the warnings about #Irma are #fake or about profit and to ignore them borders on criminal. #ShameOnRush,” he said in another.

Limbaugh said he felt he was misunderstood. Within days and without much explanation, he himself evacuated from his Palm Beach home.

Two years later, Limbaugh went after Swedish climate activist Greta Thunberg, who was 16 at the time and had recently been named Time magazine’s person of the year. The radio host criticized the honor, suggesting the Democratic Party and “the worldwide left” were using Thunberg as a political pawn to advance climate change.

“And nobody is permitted to question her, you see, because she has — what did they call it? She is in the autism spectrum, so you can’t disagree, you can’t question, because she’s not well,” he said of Thunberg, who has an Asperger’s syndrome diagnosis.

When Joseph Biden won the 2020 presidential election, Limbaugh joined other conservative commentators in suggesting Trump had had the election stolen from him.

Biden, he told listeners on Dec. 16, “didn’t win this thing fair and square, and we are not going to be docile like we’ve been in the past, and go away and wait until the next election.” He stopped short, however, of urging listeners to march on Washington on Jan. 6, when Trump supporters and hard-right activists stormed the U.S. Capitol, leaving five dead and more than 140 injured.

Rush Hudson Limbaugh III was born Jan. 12, 1951, in Cape Girardeau, Mo., to Mildred Carolyn and Jefferson Limbaugh Jr. His father was a lawyer and a U.S. fighter pilot. His grandfather was a prosecutor and judge whose long legal career ended when he died at 104.

Limbaugh played football at Cape Girardeau Central High School, where he graduated in the late 1960s. He got his first radio gig at age 16, working at a local station in his hometown.

To please his parents, he briefly attended Southeast Missouri State College, but he dropped out before finishing his first year. His mother once reportedly said: “He flunked everything. … He just didn’t seem interested in anything except radio.” His father, Limbaugh said, never took his career in radio seriously until he saw his son on ABC’s “Nightline.”

In his later years, Limbaugh struggled with health issues.

He suffered from hearing loss in 2001. By October of that year, he was nearly totally deaf and underwent cochlear implant surgery in December.

Two years later, he revealed his struggles with a different battle: addiction to painkillers. His dependence on OxyContin dated to the mid-1990s and landed him in a rehabilitation facility for about a month.

In February 2020, Limbaugh announced he had been diagnosed with advanced lung cancer.

He told listeners at the time that he knew something was wrong after he began experiencing shortness of breath. He said he considered keeping the news of his health a secret “because I don’t like making things about me” but eventually realized that his occasional absences due to treatment would raise questions.

“You know me, I’m the mayor of Realville,” said Limbaugh at the time. “So this has happened, and my intention is to come here every day I can and do this program as normally and as competently and as expertly as I do every day, because that is the source of my greatest satisfaction professionally, personally.”

Limbaugh wrote multiple books. His time-travel novel series about American history for children was an enormous commercial success despite not being critics’ favorite. He was even honored as author of the year at the Children’s Choice Book Awards in 2014 for “Rush Revere and the Brave Pilgrims: Time-Travel Adventures With Exceptional Americans.”

His first couple of books from the 1990s, “The Way Things Ought to Be” and “See, I Told You So,” were New York Times bestsellers.

Limbaugh, who had no children, is survived by his fourth wife, Kathryn, whom he married in 2010.