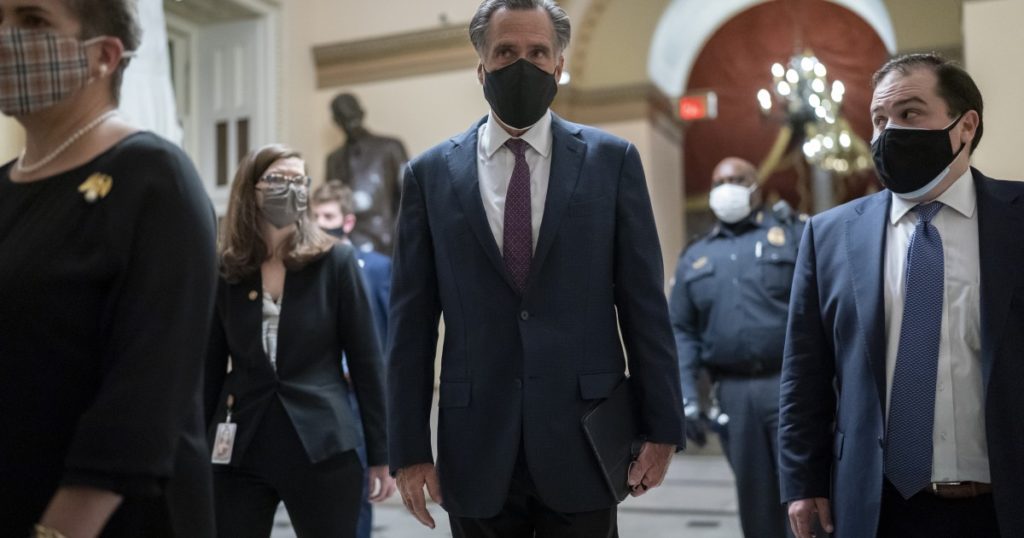 Sen. Mitt Romney was visibly angry. Hours earlier on Wednesday, the Capitol had been breached by violent supporters of President Trump.

As he and his peers huddled in a safe part of the complex, Romney fumed that the president and his enablers in Congress were responsible for the assault on American democracy. Late in the evening, as senators confirmed President-elect Joe Biden’s victory, Romney delivered a scathing speech excoriating the elected officials who put political ambition ahead of the nation — the natural culmination of a danger Romney had been warning about for more than four years.

“We gather today due to a selfish man’s injured pride and the outrage of his supporters whom he has deliberately misinformed for the past two months and stirred to action this very morning,” said Romney, speaking in the Senate chamber about Trump’s baseless claims that the November election was rigged.

“I don’t know I’ve ever seen him this angry,” said Katie Packer Beeson, deputy campaign manager of Romney’s 2012 presidential bid. “But I also thought I’ve never been more proud to be identified as a ‘Romney person.’”

This Romney, hair slightly disheveled, palpably furious, was different from the cool, sometimes wooden candidate Americans might remember from the campaign trail in 2008 and 2012, a candidate who said “heck” or “darn it” when he felt particularly passionate. Shortly before he spoke, Romney was seated behind Sen. Josh Hawley, a Missouri Republican who was among the most prominent backers of an effort to overturn the results of the November election. Clad in a facial mask with only his eyes visible, Romney appeared to be shooting daggers at the back of Hawley’s head.

People close to him, as well as nonpartisan political observers who have followed his career for two decades, say that Romney’s speech was the distillation of his life’s experiences, starting with watching his father, a former GOP governor of Michigan, face the ire of his party because of his support for civil rights.

“You have to go back to his father, George Romney, who stood up for justice in the ‘60s. He learned lessons from that,” said David Kochel, a longtime senior advisor to Romney.

After Romney was the sole Republican to vote for Trump’s impeachment last year, he told a reporter he drew on his experiences growing up Mormon among those who did not share or understand his religion.

After regularly facing small tests of conscience, when a bigger challenge looms, “you’re not in a position where you don’t know how to stand for something that’s hard,” he said, according to the Atlantic.

Romney’s allies also point to his experience as a two-time presidential loser, in the 2008 GOP primary and then in the 2012 general election.

“2012 was a really hard campaign. He conceded, and he did so gracefully. He stepped out of the spotlight and didn’t criticize [President] Obama in the interim,” said Lanhee Chen, Romney’s former policy advisor who now teaches at Stanford University. “All these things are important lessons from the 2012 campaign.”

That’s not to say Romney has been a perfectly consistent politician. As the governor of Massachusetts, he was a centrist, but he swung hard to the right during the 2008 and 2012 presidential primaries, notably on immigration.

During the latter campaign he actively sought the endorsement of Trump, who was then still pushing false Obama “birther” theories. That culminated in a cringe-inducing scene where Trump backed Romney at his gold-crusted hotel on the Las Vegas Strip.

“There are some things you just can’t imagine happening in your life. This is one of them,” Romney said at the time.

The 73-year-old multimillionaire, who tried to derail Trump’s nomination in 2016 because he believed he was dangerous for the GOP and the nation, is helped by the fact that he probably won’t run for president again, nor is he likely to face a strong Senate primary challenge in Utah, a state where his family is popular and Republicans have shown a particular wariness toward Trump.

“He’s in a different stage of life and his career,” Chen said. “But you see other people in relatively safe political situations who did not take the measure of risk he did.”

Romney has faced repercussions; he has been trolled by Trump when he speaks out against him. He has been subjected to anger from Trump supporters; on Tuesday some of them confronted him at the Salt Lake City airport and then chanted, “Traitor! Traitor! Traitor!” on a flight to Washington.

But now perhaps less vocally so, said Jason Perry, the director of the Hinckley Institute of Politics at the University of Utah. “The people who would normally stand up and say Mitt Romney is not right — none of those voices are present,” Perry said Thursday of the political chatter in the state. “No one was defending the actions of the people storming the Capitol yesterday.”

Throughout his career, Romney has been defined by his earnestness, a trait widely mocked by his GOP rivals campaigns and on “Saturday Night Live.” That attribute could even explain his shifting stances, Monson said, such as meeting with Trump about a potential Cabinet appointment after the 2016 election despite having fiercely criticized him.

“I think he was earnestly trying to be helpful while knowing he was dealing with the devil,” said Monson, whose firm Y2 Analytics did polling work for Romney’s 2018 Senate campaign.

Romney was a quintessential post World War II, pre-counterculture presence that didn’t seem to fit in the 21st century. He liked to sing a stanza of “America the Beautiful” at rallies, and would light up when describing meeting his “sweetheart” Ann when she was 15 years old.

Packer Beeson recalled the derision Romney received during his presidential campaigns as a man trapped in the 1950s and as a “Mr. Smith Goes to Washington” type.

“Sometimes I do look at him and think, ‘You came from an era when we were better than this,’” Packer Beeson said. “I think a lot of people don’t understand that character in ‘Mr. Smith Goes to Washington’ wasn’t weak because he wasn’t this big blustering strongman.

“Strength comes in different packages and doesn’t always look like what some people think it looks like today,” she said. “Certainly what we saw from Mitt Romney yesterday was strength.”

Some in Romney’s inner circle say that rather than a watershed moment, the speech Wednesday simply reflected the man they’ve known for a long time. And, they added, the fact it seemed extraordinary said more about today’s politics than it did about one elected official.

“What we saw with his speech … was not the product of deep soul-searching and steely-jawed integrity, but rather the result of establishing core principles in his life and living according to them,” said Matt Waldrip, the senator’s outgoing chief of staff who worked with Romney most of his adult life. “If what Romney did last night was our measure for integrity, we need to raise the bar.”