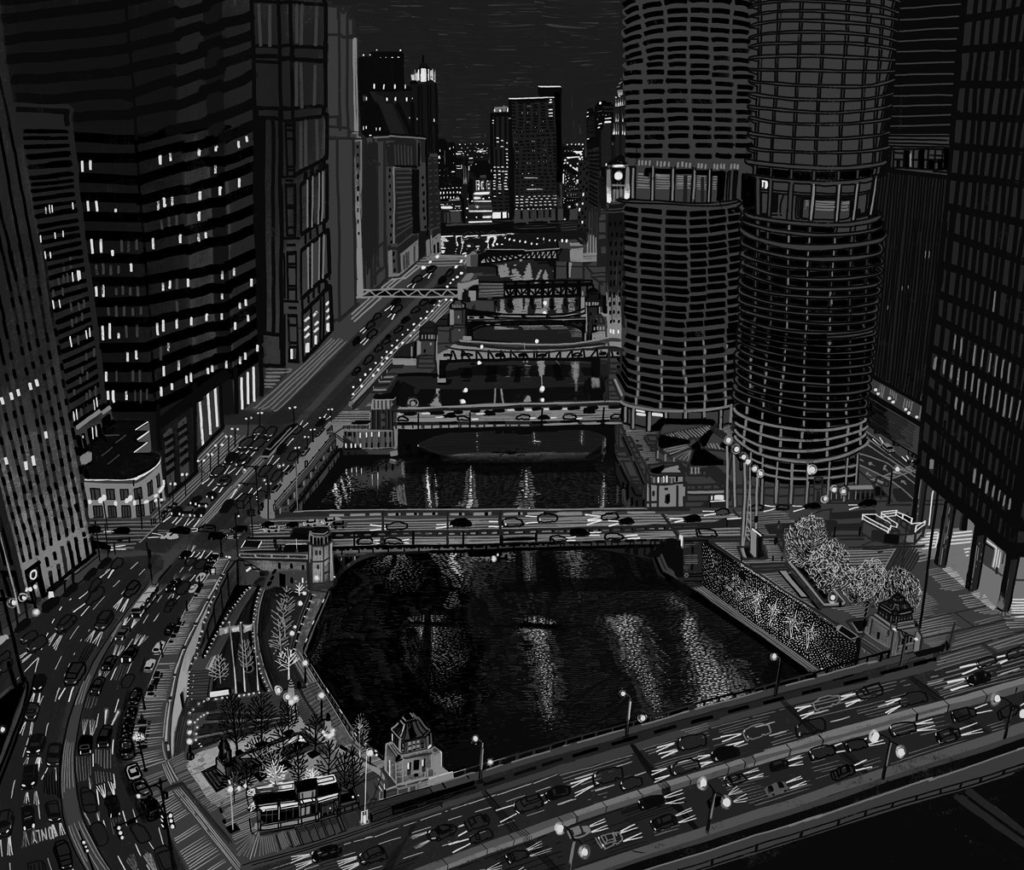 For over 10 years, the “99 Percent Invisible” podcast has been a touchstone for anyone interested in the often-overlooked design choices that shape our world — and particularly, the auto-centric design choices that shape our streets. More than 400 million downloads later, host Roman Mars collaborated with producer Kurt Kohlstedt to co-author The 99 Percent Invisible City: a Field Guide to the Hidden World of Everyday Design, which reveals the secret history of urban errata around the world and on your own block.

From the surprising insights that gave the jersey barrier its curves to the bizarre crash that lead to the invention of the roadway centerline, the stories in its pages inspire us to give the everyday a second look — and realize how profoundly our streets can be remade by simple design choices, no matter the violent history that may have built them.

We talked with Mars about his new book, and why wonder might be the missing ingredient in the fight to end traffic violence.

Streetsblog: The “99 Percent Invisible” podcast has explored just about every interesting design choice on Earth (and even a few from outer space.) Why did you decide to focus on the city in your first book?

Roman Mars: People have been asking us to do a book about the podcast practically since it got popular, but nothing ever really clicked with me as a real reason to do it. But then I had a conversation with my co-author Kurt Kohlstedt, who works on the staff at 99PI and has been a fantastic design writer for over a decade, and we stumbled on the idea of creating a sort of hands-on field guide to the things you can see and touch in your everyday life, as a way of talking about a lot of the topics we cover on the show. It just seemed like the sheer density of interesting and overlooked things in our world was greatest in the city, and a particularly large volume of them are on our roadways.

Roadways definitely get an enormous amount of attention in the book. Why do you think the concentration of under-examined design choices is so incredibly high on our streets?

RM: I think it all comes from the relatively recent concept that streets are for cars, so there’s no reason to look at them any closer. And of course, that’s a relatively recent narrative, and it was consciously created by the powerful voices of motordom. For centuries, our streets were a truly multimodal and multipurpose space: they had pedestrians and trolleycars and horses and vendors and all these things, until we ceded that territory a hundred years ago to the automobile. We’re just now starting to figure out what we lost when we made that shift, and how to get it back.

What I’d most like people to do with the book is recognize that a city is a series of choices over time, and there is nothing inherent in a street that says that a car belongs on a road and a pedestrian only belongs on a sidewalk — or maybe at crosswalk, but only when the light changes. It wasn’t always that way, and we can modify it to be however we want it to be.

The whole city should be a conversation between citizens and its designers, and it should shift based off those needs as they change. I’d love to see that conversation happen more often, and have a little more history brought into it.

Let’s talk about that history. What is it like releasing this book in the wake of the summer’s Black Lives Matter protests, which prompted a real reckoning in the urbanism world about who, historically, has gotten to make choices about how our cities are designed, policed and otherwise shaped, and who hasn’t been involved in those decisions? Did you find yourself asking questions about who the design features in this book are invisible to, and to whom they’re impossible to ignore?

RM: Of course, whenever you say something is invisible and unnoticed, there’s a tacit understanding that clearly there are some people who did notice it. The name “99% Invisible” not a 100 percent accurate description. But because of the ubiquity of lot of the objects we talk about, you become kind of blind to them over time, because you see them every day and your brain kind of filters them out. Our brains are meant to notice new things, not the same things over and over again.

The book was written before the bulk of the protests in the summer, but I think it met this moment in an interesting way. Like the show, the book is definitely focused on accessibility and equity in our places.  You can look at your streets critically and find bad choices in them, good choices in them — whole stories, right outside your door. It’s incumbent on us to think about the choices being made in our cities on our behalf, and how fair or unfair they are to us or other people — and also, ask ourselves what we can do to improve our immediate environment, and make it better for everyone.

The pandemic probably made everyday street design choices newly visible to a lot of Americans, too, if only because we couldn’t leave our neighborhoods.

RM: Definitely. And I think a lot of the book is about finding wonder in the world that’s all around you, rather than ‘wonder’ being something you can only find by traveling to other countries.  So it’s kind of an interesting companion for this moment, when we can’t travel and a lot of us are wandering around our own city streets. You can look at those streets critically and find bad choices in them, good choices in them, and find whole stories right outside your door.

Why is wonder so important to cultivate in the minds of people who make decisions about how our roadways are built? As advocates, we talk a lot about cultivating an awareness of injustice, of power, of potential for violence, but we don’t talk about wonder very much.

RM: On the show, I’ve always kind of felt like I’ve had to seduce people, somewhat, into caring about these everyday and seemingly boring things. It takes a little bit of a person coming up to you and saying, no, no, no, this is cool; pay attention to this; there’s something weird going on here. Wonder makes you stop and pay attention. It’s a joyful exercise, even if the reason why a thing is the way it is represents an ugly history of inequality or racism or the villification of cyclists and pedestrians. The discovery of that history is still joyful, because it reveals something new, and it helps you decode the world around you, and imagine new possibilities. I find that wonderful, even if the underlying story is an intense one.

There are a lot of most exciting things in this book that people aren’t likely to encounter in their own towns, at least if they live in a car-dominated American city; even the simple bike lane is a pretty rare find in some places. Did you intend for the book to be a little aspirational, too — a field guide to the city you could live in, even if you don’t right now?

RM: We knew early on that we didn’t want this book to just be limited to one city, or even one kind of city. So if we wrote about a traffic light, we decided to use the most interesting example of a traffic light we could find in the world, and hoped that would make you look at the traffic lights in whatever city you’re in a little differently. The joke of it to me was, someone could buy this and say to a friend, ‘oh, you’re going to visit a new city? Here’s a tour guide — no, not the city you’re visiting, but to all cities, in general.”

What we wanted was for you to read this book and be transported to Barcleona and see the superblocks, and see the problems the superblocks were meant to solve. And then we wanted you to go walk around your town, and go, oh, we have those problems too, and I understand them a little bit differently now. This has new resonance for me, and I see new possibilities.

This interview has been edited for clarity and length.