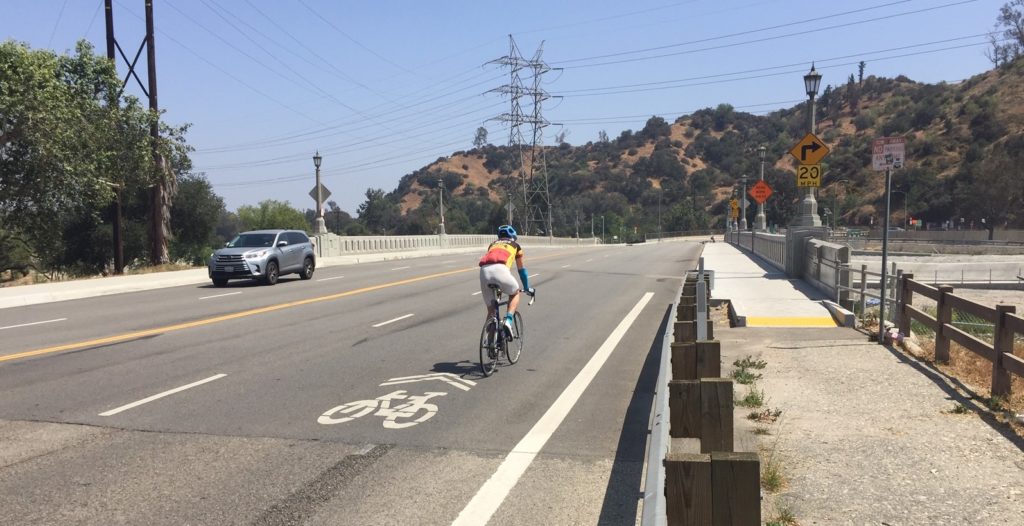 In 2018 and again last month, Streetsblog reported that the L.A. City Council-approved bike lanes had been left off of the North Spring Street Bridge. Though they are expected to be added there any day now (pending a nearby project completion), the lanes will come more than two years after the city widened the bridge.

It turns out that North Spring isn’t the only recent bridge rehabilitation project where the city failed to install approved bicycle lanes.

There is also the Riverside Drive Bridge over the L.A. River.

The city has three Riverside Drive bridges over the L.A. River (plus a couple more Riverside Drive bridges over tributaries). This bridge is located inside Griffith Park, along the north edge of the park. It is sometimes called Riverside/Zoo, because it’s very close to Zoo Drive. It is also very close to the intersection of Sonora Drive and Victory Boulevard which is where the city of L.A. borders the city of Glendale.

The city-designated historic bridge was built in 1938. In July 2020, the city completed work on its $12.8 million Riverside Drive Bridge Widening and Rehabilitation Project. The city’s Department of Public Works Bureau of Engineering (BOE) contracted with Ortiz Enterprises Incorporated to widen the bridge by 19 feet – appending a new deck onto the downstream side of the bridge in order to mostly preserve historic features of the bridge. The city justification for the project was “to correct existing geometrical design deficiencies, address seismic vulnerabilities, and improve pedestrian and bicycle travel.”

The city’s environmental documentation (called a Mitigated Negative Declaration – MND) as approved by City Council for this project states that the project scope included two new five-foot shoulders. The MND states that “The proposed project would add shoulders to the bridge for the bicyclists” as well as a bike undercrossing (more on that below.)

Though the city’s MND does not call them “bike lanes,” the city’s rendering shows bike lane markings in newly-striped shoulders.

But that’s not what the city included in the final widened bridge. The bridge today has no bike lanes, no shoulder stripe – only sharrows (which appear nowhere in the MND).

For folks not familiar with the term, sharrows are shared lane markings, called “the dregs of bike infrastructure” because they don’t actually allocate space to cyclists, nor have they been shown to make streets safer.

There are a few reasons that the Riverside Drive Bridge deserves a lot better than sharrows.

The bridge is located inside Griffith Park. Does L.A. really need big wide lanes for drivers to speed through its parks? No. Inside parks, the city should encourage more park-compatible quieter modes, like bicycling. Similarly, in pursuing river revitalization, the city stated that the river corridor will prioritize walking, bicycling, and transit.

This portion of Riverside Drive is a heavily bicycled area, largely because it’s a relatively pleasant green area where multiple bikeways come together. There are two L.A. River bike paths at this bridge. On the south side of the river is the city of L.A.’s central L.A. River bike path, which currently ends at this bridge; the Riverside Drive Bridge project added a new bikeway undercrossing to extend the path to the upstream/west side of the bridge. There is another bike path nearby along the north side of the river: the city of Glendale’s Glendale Narrows Riverwalk path. In addition, Glendale has bike lanes on Riverside Drive and Sonora Avenue, both of which are within 1,000 feet of the bridge. There are also bike lanes on Zoo Drive in Griffith Park.

The city’s MND acknowledges that the bridge sees plenty of cyclists. It notes a 2013 bicycle count that found that approximately 375 bicyclists crossed the bridge on weekdays, with 43 crossing during the morning peak hour and 34 during the evening peak hour. The same count found higher numbers on weekends: approximately 610 cyclists per day on Saturday, and 796 cyclists on a Sunday, when the hourly peak was 158 cyclists. That peak is more than two cyclists per minute, on a bridge not designed for cyclists (no bike lanes and two freeway ramps).

Adding bike lanes is fairly easy on streets where there is no parking. In these no-parking settings, it is possible to squeeze in 4-feet wide lanes, narrower than the more common 5-feet wide bike lane. The new roadway is about 53 feet wide, so there enough space for four car lanes (minimum 9-10 feet wide) and two 5-feet bike lanes.

With all these cyclists using the bridge, why didn’t the city add bike lanes?

Speculating now, some of the city’s hesitancy may well be due to what is immediately south of the newly-widened bridge: an adjacent second bridge, spanning over the 134 Freeway, with two ramps: an eastbound 134 off-ramp and a westbound 134 on-ramp.

That south bridge got sharrows, too, which were added at the same time as the river bridge.

Though the two bridges are connected, the south bridge is narrower than the newly widened bridge. The roadway there is about 45 feet wide. To add two 4-foot bike lanes there, the city and Caltrans (the state transportation department that has dominion over freeways, including their on/off ramps) would need need to accept 9-foot wide car lanes, which generally isn’t done around freeways and on streets that carry buses.

What is sad here is that the city apparently decided to throw the baby out with the bathwater. It appears that, because of a narrow ~150 foot long pinch point (the bridge over the freeway), the city ditched ~1600 feet of very feasible bike lanes (from Victory/Sonora to Zoo). It would have been possible to stripe bike lanes for the easy wider part, then drop to sharrows for just the stretch where the roadway narrows. The city has done this lane/sharrow treatment in several places, including the Burbank Boulevard bike lanes in North Hollywood, which become sharrows for a two block long pinch point.

Here is where this post goes from speculation to opinion.

Despite being heavily-biked, the Riverside Drive Bridge is a lousy place to ride because of the 134 ramps. To make this bridge a great safe place to bike, Caltrans and Los Angeles should close the Victory Boulevard ramps.

There are two freeways through Griffith Park, with about 20 on- and off-ramps in the park. People driving could still easily access the park via Forest Lawn Drive or Zoo area ramps, each about a mile from the current Victory Boulevard ramps. Some nearby residents would have to drive a bit further to get to their homes.

Many cities are removing unneeded highways, restoring some of the things that they displaced; the Southern California Association of Governments (SCAG) is even planning to do a Highways to Boulevards Study. L.A. can and should lose some of its excess freeways, in some cases this should include removing some on/off-ramps that are close to each other (see some of my other freeway ramp removal ideas for this at the end of this post). I know that this isn’t a quick or easy solution, but it would make this part of the park feel more like a park and less like a freeway.

Here’s what I think is more realistic, and could be implemented easily, especially under the leadership of bicycle-friendly City Councilmember Nithya Raman, who now represents the area:

The missing bike lanes – shown in the city’s MND – should be striped tomorrow. The city should stripe the missing bike lanes where they fit – between the bike path entrances across the new bridge to Victory/Sonora. This is cheap – basically two stripes of paint.  There is plenty of space for two 5-foot bike lanes, so no need to remove a car lane, or to even re-do the current stripes.

(Not included in the bridge project area, but immediately adjacent to the north, Los Angeles City should add a couple more blocks of bike lanes to meet up with Glendale’s existing Riverside and Sonora bike lanes.)

Even better, but a tight fit, an all-ages facility here would be a two-way protected bikeway along the downstream/east side of Riverside Drive. This can connect to a future network of two-way bikeways through all of the flatter areas in Griffith Park; that network is needed so families can bike safely and comfortably in the park (for more on this idea, see my earlier post). The ideal configuration would be similar to Ocean Boulevard in Santa Monica: a two-way protected bikeway on the east side of the street, and a southbound bike lane on the west side of the street. There appears to be just enough space to squeeze this in, though the city would probably need to narrow the inner car lanes to ~9 feet – which the city’s engineers are sometimes reluctant to do.

And for the bridge over the freeway? This is pretty tight, but current cycling behavior and current conditions hint at a decent solution.

The freeway ramps are both on the upstream/west side of Riverside Drive, which many cyclists avoid. Cyclists heading from the river path into Griffith Park don’t cross four lanes of traffic and two freeway ramps; they instead ride on the sidewalk (which is legal in Los Angeles). This keeps them on the downstream/east side of the bridge. This is a safe, low-stress way through this stretch; the city should encourage this.

The city can make this existing sidewalk riding behavior safer – and can allocate more space so that cyclists, runners, pedestrians, and others can more easily share that east sidewalk – by giving over about 5 feet of that 45-foot roadway, which would still leave four ten-foot car lanes.

At this location, out-of-control drivers have been damaging the bridge railing for so many years that there is a concrete jersey barrier permanently left on the sidewalk. It appears that some drivers coming off the 134 will miss the stop sign and plunge forward up the opposite curb and into the railing. The concrete barrier dates back to at least 2014, per Google Street View. And even with a solid concrete barrier in the way, a driver recently leapt the curb and crashed into the barrier, taking out the metal railing behind it (see photo of sidewalk cyclist above) again.

Instead of that barrier sitting on the sidewalk (partially blocking it), and trying to protect the railing, the barrier should protect people on the sidewalk, including cyclists.

My proposed solution isn’t ideal. Though it’s not a heavily walked area, people do walk there. For this ~150-f00t long stretch, I think it would make sense – for safety and convenience – for people on foot and people on bike to share space. Ideally, the sidewalk should also serve folks traveling in wheelchairs – though the sidewalk is only about 800 feet long and too narrow for wheelchair users to pass where the city currently has the jersey barrier. Just north of the Riverside Drive Bridge, and along Zoo Drive, there are no sidewalks, only dirt paths. Moving the concrete barrier into the street, would allow wheelchair access for the full 800 feet.

Let’s close with a look at the purpose of the project.  The city MND states that the project is “correct existing geometrical design deficiencies… and improve pedestrian and bicycle travel” from Zoo Drive to Victory/Sonora. With the project ostensibly complete now, the result is an area inhospitable and unsafe for people outside of cars.

The city spent nearly $13 million to correct this bridge’s deficiencies.

Pedestrians got a wider sidewalk that ends where the bridge ends and is partially blocked by a concrete barrier.

Cyclists got sharrows – plus a needed bikeway under the bridge – but no safe way to bike to and from that new bikeway extension.

For all the language in the environmental document about correcting deficiencies, the message is pretty clear. Deficiencies for drivers are the only ones that matter enough for the city to address.