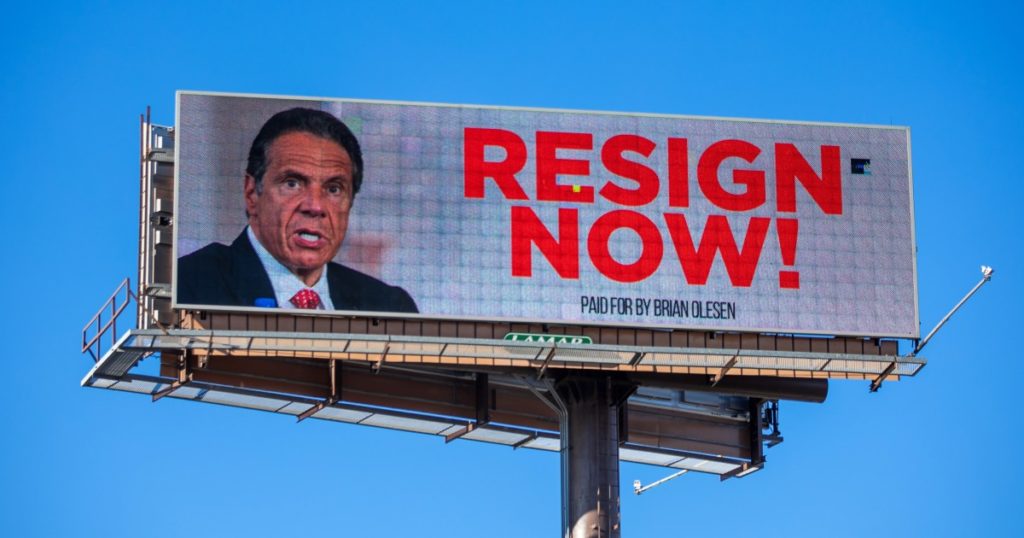 It wasn’t supposed to be like this for Democrats, who expected to honeymoon into spring as Republicans sifted through the political wreckage Donald Trump left behind.

But the bad behavior and grave unforced errors of two of the party’s biggest outside-the-Beltway stars is spoiling that reprieve, distracting from the Democrats’ work in Washington and forcing them to divert their attention to triage in parts of the country where they usually draw strength.

The missteps, unforced errors and aloofness that now have California Gov. Gavin Newsom facing the threat of recall from office have been overshadowed by the sexual harassment scandal that has rapidly engulfed his counterpart in New York, Andrew Cuomo. The two men took very different paths in their descent from darlings of liberal voters to the targets of scathing parody on SNL, but they both share problems so big they are stealing oxygen from a party that doesn’t have much to spare.

“I feel awful about it,” Cuomo said Wednesday of his behavior that led two women decades his junior who worked for him and a third he met at a wedding to accuse him of sexual harassment. “And frankly, I am embarrassed by it.”

He pledged at a news conference to cooperate with an investigation by the state attorney general, while still maintaining that he did not intentionally harass or inappropriately touch anyone. “I’m not going to resign,” Cuomo said, adding later: “I never knew at the time I was making anyone uncomfortable.”

Cuomo is vowing to serve out the rest of his term at the same time Newsom is battling a well-funded effort to eject him before his term ends. Political experts predict that if the recall qualifies for the ballot, by the time the election is held, voters are likely to be more forgiving of Newsom’s missteps: dining maskless at French Laundry while ordering the state locked down, bobbling school reopenings, botching the vaccine rollout, failing to halt billions of dollars in fraudulent unemployment payments.

Nobody is counting either of them out at the moment, as both Cuomo and Newsom have clawed their way back from the political abyss before — Newsom from personal scandals as San Francisco mayor, Cuomo from ethical lapses that resulted in his allies going to prison as governor. But the realities of the #MeToo era for Cuomo and a pandemic that has brought voters to the brink may have made obsolete the playbooks that worked so well for the men in the past. Calling in political favors, circling wagons inside the party and public displays of contrition are less potent tools than they once were.

Cuomo, in particular, is finding the aggressive tactics that helped him survive multiple scandals over the course of his three terms in office are not all that effective when facing claims of unwanted sexual advances. Putting party officials on notice that their loyalty will be rewarded and dissent punished, as Cuomo has in the past, is not going to fly. The allegations compounded a political crisis Cuomo had already created for himself by hiding data related to COVID-19 deaths at nursing homes.

“His problem right now is really big,” said Robert Shrum, director of the USC Dornsife Center for the Political Future. “He’d be lucky to stay governor, and incredibly lucky to run and get reelected.”

The Democrats have set a very different standard on matters of sexual harassment than their GOP counterparts. Republicans overlooked multiple serious allegations against Trump and aggressively backed confirmation of Supreme Court Justice Brett M. Kavanaugh even after hearing Christine Blasey Ford testify that he assaulted her when they were in high school. Among Democrats, there is zero tolerance.

Several New York legislators have called for Cuomo to resign. Some of the most powerful New Yorkers in Congress said the behavior described by Cuomo’s accusers is outrageous and unacceptable, suggesting he should face harsh consequences if it is confirmed by the state investigation. Among those demanding Cuomo be held accountable are Senate Majority Leader Charles E. Schumer and Kirsten Gillibrand, the senator who led the drive to expel former colleague Al Franken from office amid charges he behaved inappropriately toward an actress and former model he appeared with for troops abroad.

“If this were a regular workplace, he would be in hot water. He’d be fired,” said Rachel Carmona, executive director of the Women’s March, a female-led progressive group that is demanding Cuomo’s resignation. She noted that the governor has not denied accusations of impropriety, which include crude remarks and unwanted kisses, but has tried to contextualize them as misunderstandings.

“We need to have a conversation that is deeper than is this legal or illegal,” Carmona said. “Is there a pattern of behavior that is unethical, unprofessional, immoral?… I don’t think we can [expect] less of men who believe they are above the rule of law and the rules of common decency and professionalism.”

With both Cuomo and Newsom, the intense political headwinds they face are remarkable considering how beloved they were just a year ago. In the early days of the pandemic, admirers coined the term “Cuomosexuals.” They were willing to overlook his history as a bully and a control freak amid the yearning for competence in confronting the virus. Californians were also relieved to have a governor who seemed to be taking decisive action as Trump’s White House dawdled, denied medical realities and undermined its own public health experts.

Briefings by the governors explaining the measures their states were taking to protect residents presented a stark contrast to the haplessness of the Trump administration. Cuomo even penned a book while the country was still in the grips of the pandemic, sharing his “Leadership Lessons” from the crisis.

The performances in New York and California at the time crystallized the argument of Democrats that they could make government work again.

But both states would soon run into challenges managing the pandemic that were not easily overcome as schools stayed shut down and hospitals were inundated. Cuomo meanwhile, had accumulated a long list of enemies over his decades in New York politics, many of them fellow Democrats in the Legislature who had run-ins with him in which they found his approach to be not just uncompromising, but also inappropriately intimidating.

The tensions Cuomo had created inside New York politics ultimately caught up with him when an aide revealed to lawmakers last month that the governor had concealed data on COVID-19 at nursing homes, understating the number of deaths at the facilities after he required them to accept patients who had the virus.

The scandal consumed the Cuomo administration, triggering investigations and emboldening his rivals to speak out against him. Soon after, the harassment allegations surfaced; by then the governor had become an albatross for the Democratic Party.

The first of Cuomo’s accusers to tell her story publicly, Lindsey Boylan, wrote an essay recounting years of uncomfortable exchanges with the governor, including his suggestion they play strip poker and his kissing her on the lips without asking. Her story was followed by that of Charlotte Bennett, a former aide who told the New York Times that she was so unnerved by the governor’s sexual overtures that she reported them to his chief of staff, who transferred her to another job.

Then a photo appeared in the New York Times this week of the governor with his hands on the face of the wedding guest, Anna Ruch, who appeared extremely uncomfortable with the interaction. She told the Times he asked to kiss her, and the incident left her embarrassed and shocked.

As Cuomo falls deeper into crisis, Newsom appears to be in a stronger position. If the recall qualifies for the ballot, Newsom will be a formidable candidate backed by the Democratic establishment with enormous resources to fight to keep his seat.

Regardless, the baggage both men have dropped on the Democratic Party will be weighing it down for some time.

In California, what Democrats have to look forward to is a potentially bruising and expensive recall. In New York, they are facing a damaged but stubborn governor who is unlikely to step down no matter how many erstwhile allies abandon him.

While Newsom’s colleagues are rallying around him, many Democrats in New York would be relieved to see Cuomo go away. “The time has come,” tweeted Congresswoman Kathleen Rice, a former ally of Cuomo’s from Long Island. “The Governor must resign.”

Cuomo has no plans to oblige.