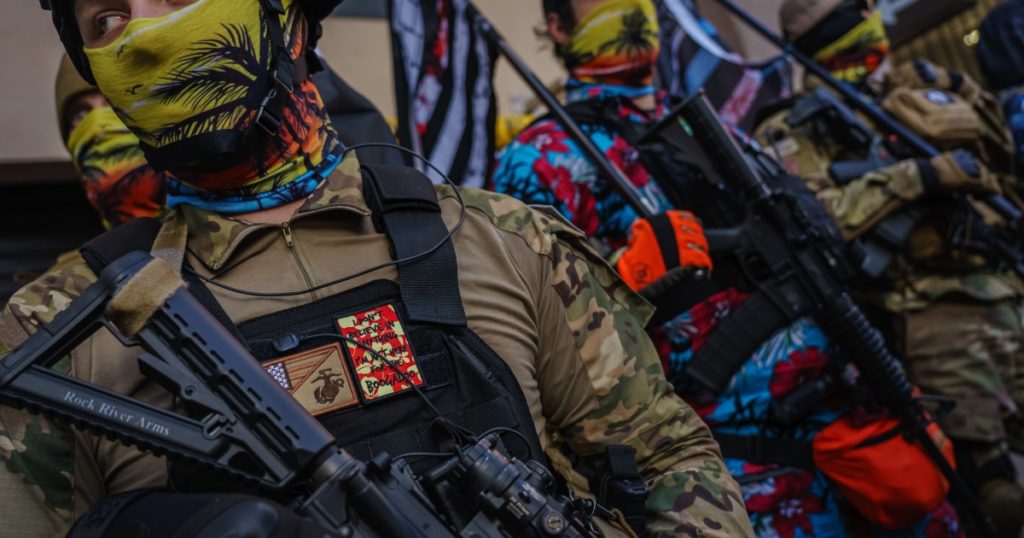 Far-right leaders across the nation — disillusioned by former President Trump’s defeat and banished from mainstream social media — have launched recruitment drives in new radicalization efforts that have turned into a “meme war” among groups such as the Boogaloo Bois, the Proud Boys and the Three Percenters.

In the days following the Capitol riot, right-wing extremists who lost Parler accounts or were suspended from Facebook and Twitter migrated to Telegram and gained a following of tens of thousands of Trump supporters looking to vent anger and promote extremist views. The groups are competing for a surge of new users on alternative platforms while refocusing their messages on militant nationalism to white supremacy.

At a gun rights protest in Richmond, Va., days before the inauguration of President Biden, local Boogaloo Bois leader Mike Dunn marched with an AR-15-style rifle in defiance of a local ordinance. He would later use a photo of himself at the protest to create a meme on TikTok, where he already has more than 74,000 followers. Mingling with fellow members in the group’s signature Hawaiian shirts, Dunn said he hoped the online meme war spreading across channels and forums would energize prospective followers on the right and left.

“We want people who walk away from Trump and authoritarianism to join us,” Dunn said in an interview later. “Memes play a role on the younger generation and we are winning.”

Trump’s impeachment and the prosecution of rioters who attacked the Capitol have left the far right emboldened and potentially more dangerous, experts say. Some still rally around the former president. Others, like the militant Proud Boys, have distanced themselves from Trump, blaming him for disavowing the Capitol insurrection and betraying them by leaving office.

“Whichever group is the most firm in its devotion and has the best mimetic potential will win,” the right-wing Boogaloo Intel Drop channel wrote to its more than 9,000 followers before the inauguration. “Civic nationalists and libertarians will find themselves in the white nationalist boat before long.”

Follower Bel Iferous responded that he had created a new Telegram “news channel” and recruited 600 Trump supporters who were baby boomers or believed in QAnon conspiracy theories.

“I just need to find memes with subtle content,” he wrote.

Extremists are attracting followers through memes that highlight threats they see to far-right causes from Biden’s presidency. Their concerns span a range of invectives — including opposition to immigration and hate toward progressives — that reveal their common ground and differences. Some focus on Biden potentially restricting gun rights, others on his efforts to expand LGBTQ protections. They target their opposition to Zionism, government lockdowns and vaccines.

Several right-wing Telegram channels have nearly tripled their followings since the Capitol riot, said Alexander Reid Ross, a professor at Portland State University who tracks right-wing groups. One of the most popular channels, Proud Boys: Uncensored, went from 16,415 followers to more than 43,000, he said. Another channel, Blackpilled, more than doubled to more than 22,000 followers. Both are replete with memes aimed at recruiting older Trump supporters, or “boomerwaffen.”

When Telegram takes channels down for violating terms of service, or when channels are spammed by critics, they often morph into new ones. Blackpilled started as Breadpilled before Telegram shut it down. Followers who click on these channels’ memes are led to even more extreme “terrorgram” channels featuring racist and anti-Semitic memes, including a recently posted cartoon of Trump wearing a Star of David while stabbing a MAGA-hat-wearing supporter in the back.

Radicalized followers can easily turn violent, Ross said, noting the Christmas Day bombing in Nashville by Anthony Quinn Warner, 63, a computer technician who espoused conspiracy theories. After the bombing, QAnon supporters took to Telegram to debate whether Warner was a Q-influenced terrorist or, “boomer bomber.” Days later, Trump supporter James Turgeon, 33 — who had shared “Stop the Steal” memes on Facebook — was charged with staging a nearby copycat attack, driving a truck broadcasting a warning similar to the one Warner had played. Unlike Warner, Turgeon didn’t have a bomb.

This week, Republican Trump supporters registered their own MAGA Patriot Party in San Antonio. While Trump’s campaign committee released a statement distancing him from the new party, organizer James Davis of Punta Gorda, Fla., said they have attracted about 9,500 members nationwide — including California — and plan to merge with a group that claims 24,000 more.

“The movement is very fragmented,” said Davis, 57, a municipal worker. “We’re worried about getting people together.”

The Three Percenters, an armed right-wing group, saw increased interest among potential followers after the November election and have been vetting new members. On one of the group’s national message boards, former Trump supporters, many of whom still cling to widely unfounded allegations of voter fraud, voiced disappointment this week with the democratic process.

“Hope no one was hoping to use elections to fix the country,” wrote Riley Quinlan, whose profile features a photo of him hunting deer. “Republicans will never win an election again. We should of done something while Trump had our backs. We waited, it’s too late, the regime is in, republic is gone.”

Michael Batterton, a U.S. Army veteran, responded, “Better ask yourself … did he really have your back?” noting Trump “drew all the patriots out in the open to be targeted…. The swamp has never been deeper. Just saying blind worship of this man is misguided.”

In addition to online recruiting, extremists are likely to continue targeting right-wing events, Ross said. Before the Capitol attack, attendance at pro-Trump “Stop the Steal” rallies had surpassed Black Lives Matter protests, according to the nonprofit Armed Conflict Location & Event Data Project. After the attack, right-wing demonstrations continued against coronavirus lockdowns, including in California.

“This has been very energizing for far-right movements,” Lindsay Schubiner, program director at Portland, Ore.-based Western States Center, said of the Capitol attack. “We are still concerned that they will bring that energy home to conduct anti-democratic activity targeting state legislative sessions and capitals.… The core of these movements is likely to become even more hardcore and violent.”

Violent attacks by right-wing extremists have become rallying cries in the past. The wife and son of white separatist Randy Weaver were lauded by some as martyrs when they were killed in a siege at Ruby Ridge in Idaho in 1992. Three years later, Timothy McVeigh’s bombing of the federal building in Oklahoma City, which killed 168 people, inspired numerous attempted copycats, according to FBI records. The 2014 showdown over land rights between Nevada rancher Cliven Bundy and federal officials, and another standoff two years later at an Oregon wildlife refuge, where supporter Robert LaVoy Finicum was fatally shot, spurred a wave of outrage on the right.

Schubiner, who tracks activity by right-wing extremists, said some have chosen to work within the political system, shifting their focus from disputing Trump’s loss to joining local races.

“They are spreading bigotry to build political power. Many times that looks like running for local or even state-level offices,” she said, with some already running for school boards, city councils and Republican Party precinct slots.

Matt Marshall, leader of the Washington Three Percenters, lost a state legislative race last year, but gained attention for his 300-member group. Facebook recently took down his group’s page, and Twitter removed one of his posts. But Marshall, 36, an Army veteran and school board member in Eatonville, Wash., said his group was still active, fighting state gun control legislation and coronavirus restrictions.

“I blame our Republican leadership in Washington state for an inability to stand up to lockdown measures,” he said, and he dismissed Twitter as “the domestic terrorist.”

Michelle Gregoire also lost a state legislative race last year while serving as a member of the Michigan Home Guard militia and had her Facebook page taken down. Gregoire, 29, a school bus driver who was removed from the state Capitol during a spring lockdown protest, said she recently quit the militia to “regroup and continue spreading the message of conservatism and small government.” She condemned the U.S. Capitol attack but said she supported protesters outside.

“We see the right always get demonized,” she said.

Chris Hill, a Marine veteran who leads the 75-member Georgia-based III% Security Force, supported the Capitol attack and said the federal crackdown that followed left right-wing groups feeling persecuted. He compared Ashli Babbitt, the San Diego veteran fatally shot by police while participating in the riot, to Finicum, the rancher shot and killed by federal authorities in 2016.

“I am just a target now, a pariah,” Hill said. “My 1st Amendment is gone. Ask LaVoy Finicum and Ashli Babbit how trespassing/protesting worked out for them.”

The FBI has charged more than 120 people in connection with the Capitol riot and are investigating hundreds more. Both Enrique Tarrio, national leader of the armed, right-wing Proud Boys, and local leaders like Joseph Biggs and Nicholas Ochs face federal charges (Tarrio was arrested on his way to the Capitol rally on suspicion of burning a Black Lives Matter banner during a protest the month before).

Rather than deter armed right-wing extremists, the police crackdown and social media de-platforming have become fodder for their memes and could fuel their recruiting, experts say. That’s what happened after officials charged 17-year-old Kyle Rittenhouse with fatally shooting two Black Lives Matter protesters and wounding a third last year in Kenosha, Wis.

“They turn people into martyrs and political prisoners quite quickly,” said Stephen Piggott, a program analyst at Western States Center. “We could see that happening with people like Tarrio and Biggs, especially if they do stand trial and face prison. There’s no sign right now that their energy is dissipating even if they are encountering consequences from law enforcement.”

Austin Petersen, 39, a libertarian talk radio show host based in Jefferson City, Mo., has been trying to persuade Trump supporters to regroup as “Tea Party 2.0,” filling his Instagram account with right-wing memes.

But Peterson, who’s fiancee is Jewish, said he’s troubled to see young conservatives he knows dressing up as the extremists they see online. Some are just playing a part, he said, while others ask him what he thinks about right-wing Telegram commentators like Nick Fuentes and appear “on the brink” of actually joining extremist groups.

“They know just by wearing a Hawaiian shirt people will say, are you a member of the Boogaloo?” Peterson said. “They know they’re going to be on the news and it’s going to drive liberals crazy. And that’s what they want.”